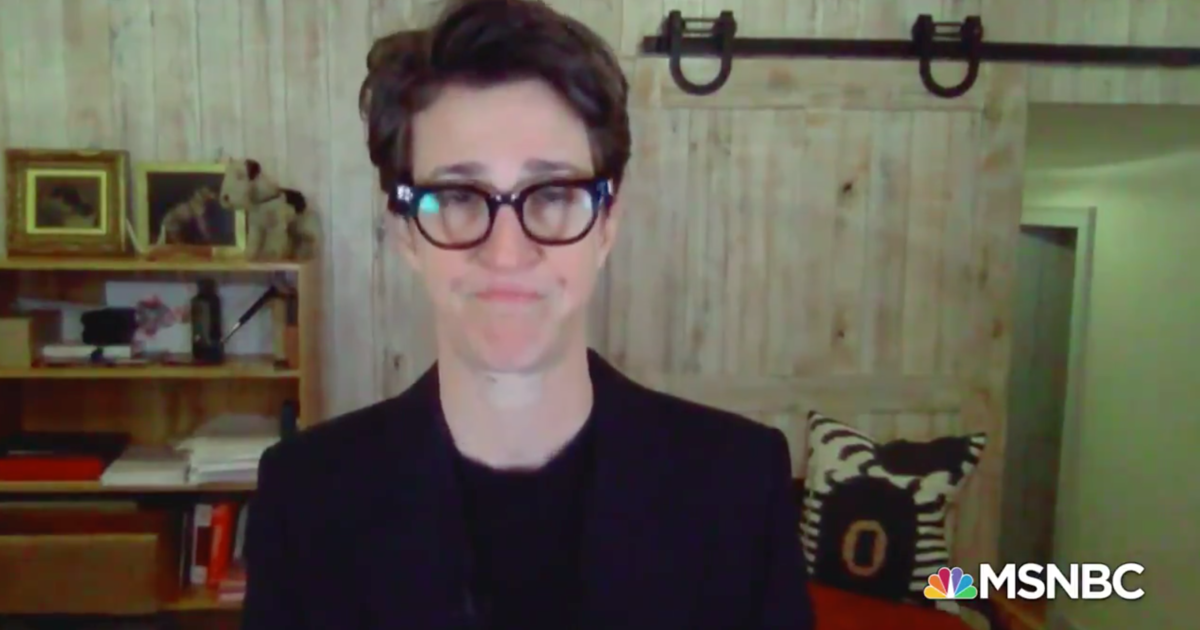 After being off the air for two weeks, MSNBC’s Rachel Maddow made an emotional return Thursday night, telling viewers her partner, Susan Mikula, “the center of her universe,” has COVID-19. Maddow said that “at one point, we really thought there was a possibility that it might kill her,” and urged viewers to “do whatever you can to keep from getting it.”

Mikula was diagnosed two weeks ago, Maddow said. The day Mikula tested positive, Maddow said she tested negative, and the two have physically kept apart since. Maddow said Mikula got “sicker and sicker” over the past two weeks but is starting to recover.

Maddow: Don't get this thing. Do whatever you can to keep from getting it.

Rachel Maddow reveals that her partner, Susan, tested positive for Covid-19 and is still recovering, and implores viewers to consider their loved ones when they calculate their own Covid-19 risk. pic.twitter.com/oUz2DBLG63

Maddow emotionally described her relationship, saying Mikula “is the center of my universe.” The couple has been together for more than 21 years, Maddow said.

“The way that I think about it is not that she is the sun and I’m a planet that orbits her — that would give too much credit to the other planets. I think of it more as a pitiful thing that she is the planet and I am a satellite and I’m up there sort of beep beep beeping at her and blinking my lights and just trying to make her happy,” Maddow said. “…My relationship with Susan is the only thing at the end of the day that I would kill or die for without hesitation.”

Maddow went on to urge viewers to “recalibrate” their decisions and plans, particularly with the upcoming holidays.

“Just believe me, whatever you have calculated into your life as acceptable risk, as inevitable risk, something that you’re willing to go through in terms of this virus because, hey, statistically it probably will be fine for you and your loved ones, I’m just here to tell you to recalibrate that,” Maddow said.

She pointed at hospitalization numbers that have drastically increased over the past few weeks. On Wednesday, a record 73,000 people in the U.S. were hospitalized for COVID-19, and data has shown that many hospitals are expecting to face staffing shortages as cases continue to surge. Broadly speaking, Maddow explained, “There isn’t room for you in the hospital anymore.”

The news and politics host acknowledged that people might be more willing to risk themselves now, after dealing with the pandemic for more than half the year, but said the virus doesn’t give people the “choice” of who or how hard it will affect someone.

“I would have done anything, I would have moved mountains for it to have been me who was sick these past couple of weeks instead of Susan. I still would give anything for that, but this thing does not give you that choice,” Maddow said. “You can’t say I’m willing to just get it myself and play the odds… it wont necessarily be you. It will be the person you most care about in the world, and how can you bear that?”

The Centers for Disease Control and Prevention, as well as local, state and federal officials have recommended that people refrain from traveling for Thanksgiving. Many also recommend that people only celebrate the holiday with those they live with, to prevent further spread.

“This thing is scary as hell. Whatever you’ve been willing to do to risk getting it, don’t,” Maddow said. “Just don’t do it.”