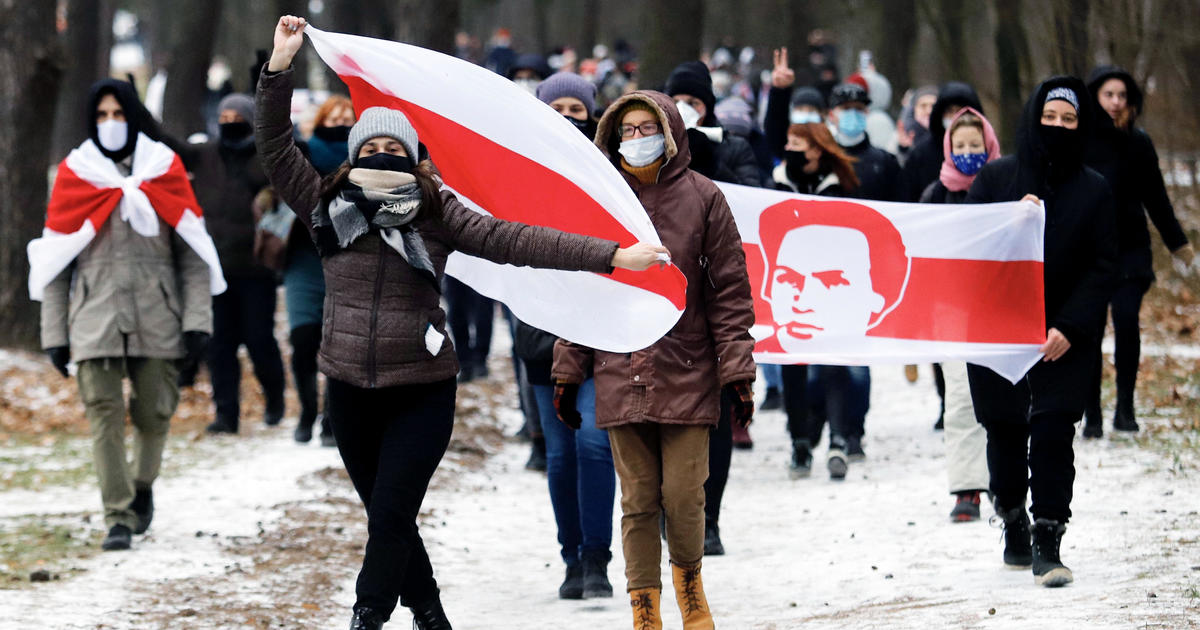 Protesters keep pressure on Belarus’ dictator, and pay the price

Moscow — Anti-government protests continued on Monday in the capital of Belarus for the 128th day. Scores of demonstrators hit the streets of Minsk calling for President Alexander Lukashenko to resign, despite hundreds of people being detained for doing the same thing just hours earlier, and tens of thousands over the past few months.

The mass-protests on Sundays have become a staple of Belarus’ beleaguered pro-democracy movement. Every week, despite frigid temperatures, they continue to gather to denounce the country’s long-time authoritarian leader, who claimed victory in a disputed August presidential election and assumed his sixth term in office. Every week, hundreds more are arrested for doing so.

Many people, both in Belarus and around the world, have denounced the summer election as rigged and believe it was Lukashenko’s main rival, Svetlana Tikhanovskaya, who really won the majority of the votes.

Thousands are believed to have come out again this past Sunday, but in a bid to complicate the security forces’ efforts to silence them, they tried a new tactic. Instead of one major rally in the center of Minsk, smaller protests were scattered across dozens of locations around the capital.

Opposition supporters carrying the former white and red flags of Belarus parade through the streets during a rally against Belarusian President Alexander Lukashenko in Minsk, December 13, 2020.

They marched in mainly residential areas, carrying the red and white flags that are a symbol of the opposition, and chanting anti-Lukashenko slogans and “Long live Belarus.”

Police officials said more than 300 people were detained during the Sunday protests, and rights activists said at least two Belarusian journalists were among them.

According to the Minsk-based Viasna Human Rights Center, more than 30,000 people have been detained since the protests first broke out in August, and thousands of them have been brutally beaten in custody. At least four people have purportedly died.

Smaller-scale demonstrations continued Monday afternoon, including a “march of retirees” in downtown Minsk. Belarusian online news outlet Tut.by cited human rights activists as saying that around 70 or 80 of those protesters were rounded up by security forces and put on buses. It wasn’t clear whether they had been formally placed under arrest.

Belarus’ exiled opposition leader Tikhanovskaya was in Berlin, meanwhile, to meet with German President Frank-Walter Steinmeier. Tikhanovskaya, along with several other opposition figures, fled her country for Lithuania soon after the election. She has been calling for Western nations to ramp-up pressure on Lukashenko’s regime and help end his 26-year rule.

In an interview with German newspaper Süddeutsche Zeitung, Tikhanovskaya said she expected Lukashenko to be force out of power by the spring, but she seemed to be under no illusion that it would be easy.

“We’re still at the first step — pressure from within and pressure from outside. It would be naïve to believe that Lukashenko just leaves,” she was quoted as saying.

On Wednesday she will receive the European Parliament’s prestigious Sakharov Human Rights Prize.

Following the disputed elections and the violent crackdown by security forces against the protesters, the European Union imposed travel bans and froze the assets of almost 50 Belarusian officials.

Lukashenko, who has the backing of Russian leader Vladimir Putin, signaled weeks ago that he was planning to draft a new constitution, but he hasn’t given any indication that he might step down. He claims the protests have been orchestrated by foreign powers.

One woman's mission to empower single mothers toward self-sufficiency »