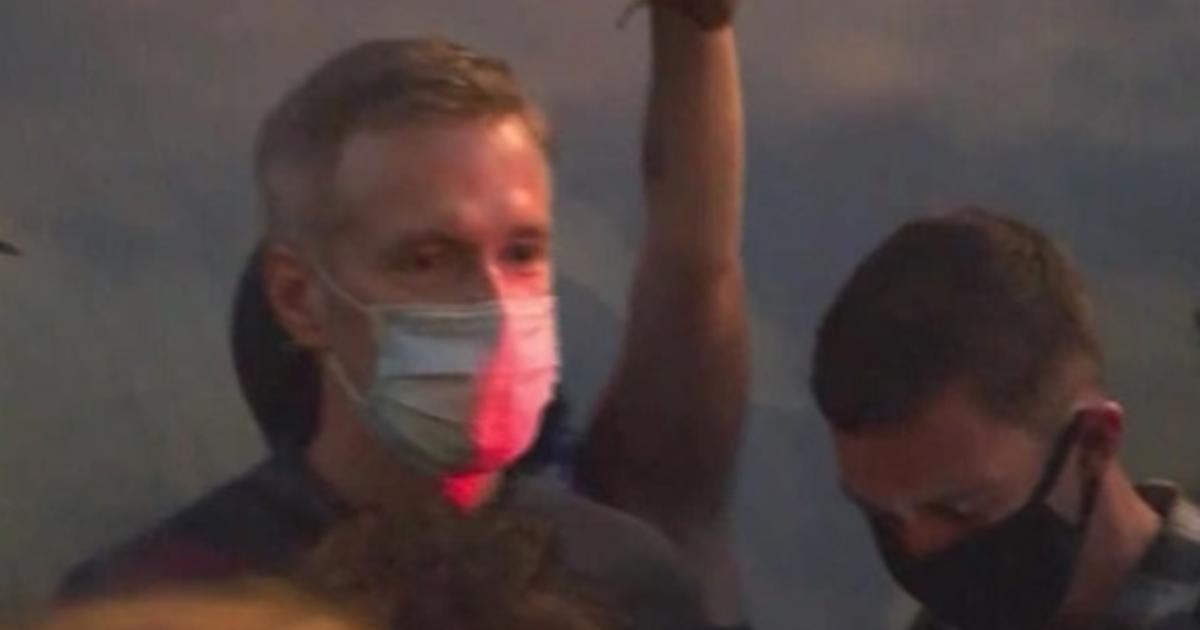 The mayor of Portland, Oregon, was tear-gassed by the U.S. government late Wednesday as he stood at a fence guarding a downtown federal courthouse during another night of protests. Demonstrators have clashed repeatedly with federal agents sent in by President Trump to quell ongoing unrest in the city.

It was the 55th straight night of protests in Portland against police brutality and seeking racial justice. They’ve led to the clashes with the federal officers and to those officers deploying tear gas every night for more than a week, reports CBS Portland affiliate KOIN-TV.

Wednesday night was no different.

Mayor Ted Wheeler, a Democrat, said it was the first time he’d been tear-gassed. He appeared slightly dazed and coughed as he put on a pair of goggles someone handed him and drank water. He didn’t leave his spot at the front, however, and continued to take gas.

Around Wheeler, the protest raged, with demonstrators lighting a large fire in the space between a fence and the Mark O. Hatfield Federal Courthouse, and with the pop-pop-pop of federal agents deploying tear gas and stun grenades and pepper balls into the crowd. It wasn’t immediately clear if the federal agents knew Wheeler was in the crowd when they used the tear gas.

Portland, Oregon Mayor Ted Wheeler was surrounded by tear gas fired by federal agents at a protest in his city on night of July 22, 2020.

Fireworks were set off, upsetting one demonstrator:

Speaker addressing the people setting off fireworks, telling people who see them doing that to "whoop their ass. This is supposed to be a peaceful protest." pic.twitter.com/40Fk8l9ZKh

Later, Portland police had a stern warning for protesters:

A riot has been declared outside the Justice Center. Disperse to the north and/or west. Disperse immediately. Failure to adhere to this order may subject you to arrest or citation, or riot control agents, including, but not limited to, tear gas and/or impact weapons.

Wheeler was mostly jeered as he tried to rally the demonstrators but was briefly applauded when he shouted “Black Lives Matter” and pumped his fist in the air.

The mayor has opposed federal agents’ presence in Oregon’s largest city but has faced harsh criticism from many sides, and his presence wasn’t welcomed by many, who yelled and swore at him. “I want to thank the thousands of you who have come out to oppose the Trump administration’s occupation of this city,” Wheeler told hundreds of people gathered near the federal courthouse. “The reason this is important is it is not just happening in Portland … we’re on the front line here in Portland.” Some Portland residents, including City Council members, have accused Wheeler of not reining in local police, who used tear gas multiple times before federal agents arrived early this month in response to the nearly two months of nightly protests since George Floyd was killed. Others, including business leaders, have condemned Wheeler for not bringing the situation under control before the agents showed up. Protesters in the crowd held signs aloft that read “Tear Gas Ted” in reference to the Portland Police Bureau’s use of the substance before federal agents arrived. When the mayor left the protest, around 12:40 a.m., some protesters surrounded him and shouted angrily at him as he walked away. One person shouted, “You’ve got to be here every single night!”

And the ACLU filed another lawsuit Wednesday on behalf of volunteer medics who have been attending to injured protesters. It alleges that federal agents have used rubber bullets, tear gas, pepper spray, batons and stun grenades against medics in violation of federal protections for freedom of speech and freedom of movement.