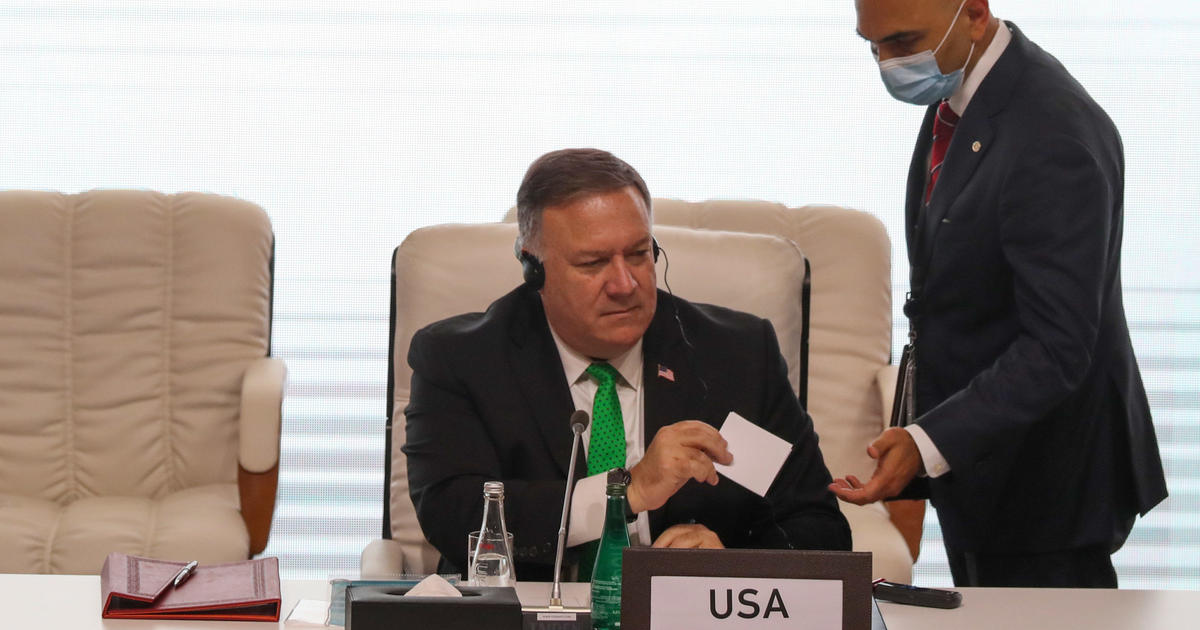 Could Trump push a vaccine through before election day?

Historic negotiations between the Taliban and Afghanistan’s political leadership opened in Qatar on Saturday, offering the best chance of peace after decades of war.

The U.S. had hoped negotiations would start within two weeks of February 29, when it signed a peace deal with the Taliban, effectively acknowledging a military stalemate after nearly two decades of conflict.

“Secretary Pompeo urged the Taliban to seize this opportunity to forge a political settlement and reach a comprehensive and permanent ceasefire,” Brown said in a statement. “He welcomed Afghan leadership and ownership of the effort to end 40 years of war and ensure that Afghanistan is not a threat to the United States or its allies.”

U.S. Secretary of State Mike Pompeo passes a note during the opening session of the peace talks between the Afghan government and the Taliban in the Qatari capital Doha on September 12, 2020.

U.S. peace envoy Zalmay Khalilzad, who invested a year and a half negotiating the deal, called negotiations between the warring sides “a historic opportunity for peace … one that benefits all Afghans and contributes to regional stability and global security.”

But the issues that separate the two sides are many, the mistrust is deep and the way forward is fraught with uncertainty.

Here’s where things stand going into the talks.

One of the first items on the agenda will be a comprehensive and permanent cease-fire.

The government has been relentless in its demand for one, and the Taliban have repeatedly said it would be one of the first items on the agenda when negotiations begin. The big hurdle is likely to be what to do with tens of thousands of armed Taliban fighters and the militias loyal to government-allied warlords.

Protection of rights, particularly women’s, will also be high on the agenda. Afghanistan, including the government, is deeply conservative and in 19 years has refused to pass a women’s rights bill. The eyes of the international community are likely to be the biggest motivator for making progress for women.

The Taliban have already said yes to women and girls attending school, women working, women in politics and as lawyers and judges. However, they say they draw the line at a woman president or Supreme Court chief justice. The Associated Press has surveyed numerous political leaders in Kabul – men and even a few women – who say this is a compromise they can live with. Not everyone agrees, including the former head of Afghanistan’s Human Rights Commission, Sima Samar.

Constitutional changes are also expected to be high on the agenda, and big in many Afghans’ minds will be the Taliban’s interpretation of Islamic rules. Other housekeeping issues include deciding on the name of the country: Islamic Republic or Islamic Emirate?

Abdullah Abdullah (C), Chairman of Afghanistan’s High Council for National Reconciliation, speaks with members of delegations at the end of the session during the peace talks between the Afghan government and the Taliban in the Qatari capital Doha on September 12, 2020.

At the negotiating table

On the Taliban side, the 20-member negotiating team is a solid group that includes 13 members from the movement’s leadership council. It is led by Taliban chief justice Abdul Hakim, whose appointment last weekend came as a surprise. He replaced Sher Mohammed Abbas Stanikzai, who is now deputy head of the Taliban team.

Taliban chief Maulvi Hibatullah Akhunzada reshuffled the negotiating committee throughout August, removing a key negotiator Maulvi Amir Khan Muttaqi, who is considered close to Afghanistan’s neighbor Pakistan. He added another four from the leadership council. The strength of the team means they can make decisions pretty much on the spot.

Taliban co-founder Mullah Abdul Ghani Baradar speaks during the opening session of the peace talks between the Afghan government and the Taliban in the Qatari capital Doha on September 12, 2020.

The man who negotiated the peace deal with the Americans and is a co-founder of the movement, Mullah Abdul Ghani Baradar, heads the organization’s powerful office in Qatar’s capital, Doha.

The Afghan government’s negotiating team is led by Mohammad Mamoon Stanikzai, no relation to the Taliban head negotiator. He is a former head of Afghan intelligence who was forced to resign after an anti-terrorist intelligence unit was implicated in civilian deaths.

The real power to make decisions will rest with the High Council for National Reconciliation led by Abdullah Abdullah, who was given the post in a political compromise with President Ashraf Ghani after challenging Ghani’s win in controversial presidential elections last year. Abdullah’s council will seek expert opinions on legal, religious and constitutional issues as they come up before reaching any agreement.

Afghan observers and analysts have expressed fears that disgruntled former Taliban fighters could join other militant groups, most notably the Islamic State group’s affiliate in the country.

Taliban fighters have been battling the upstart affiliate, but the Taliban have already lost fighters to the radical militant Sunni Muslim group. Many Taliban fighters are disillusioned at their leaders entering peace negotiations and believe they could win militarily, with nearly 50% of the country already mostly in their control.

Washington’s watchdog, the Special Inspector General for Afghan Reconstruction, has expressed concerns that Taliban fighters returning to their homes could be targeted by corrupt officials or threatened by authorities. This happened in 2001 when former fighters went home after their government was ousted by the U.S.-led coalition for harboring al-Qaida leader Osama bin Laden. Those fighters went into the mountains and back into the ranks of a – at that time – largely destroyed Taliban. The attacks against the returning fighters also exacerbated ethnic divisions, with most Taliban, who are ethnic Pashtuns, feeling marginalized.