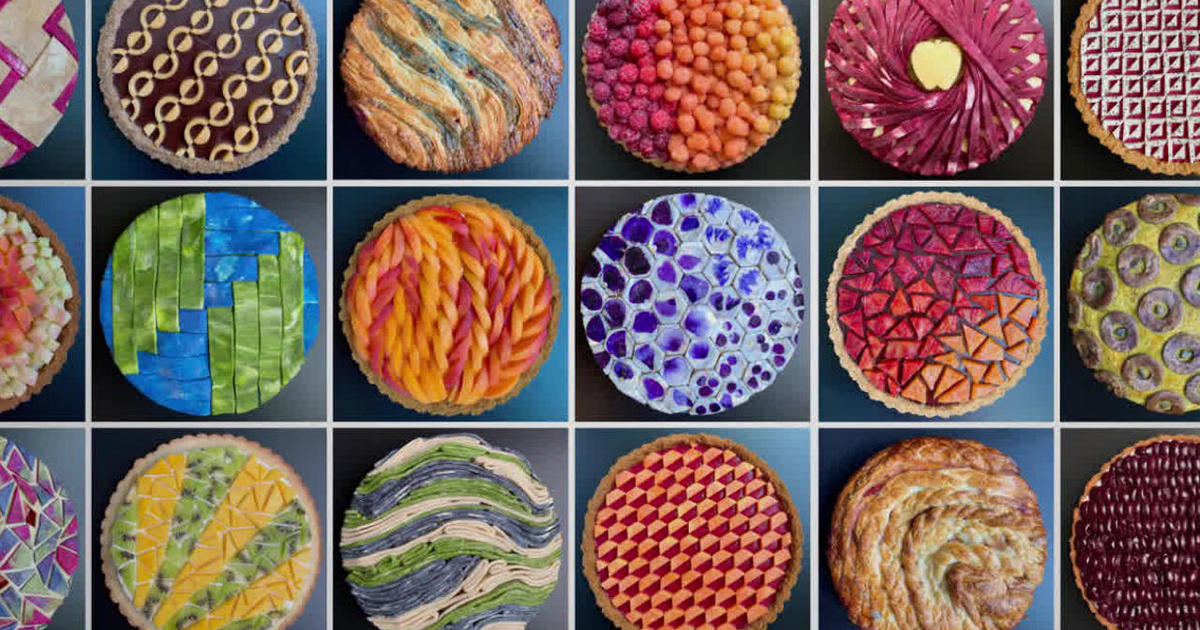 From her kitchen in Seattle, Lauren Ko posts photos of the gorgeous pies and tarts she whips up to the popular Instagram account, Lokokitchen.

“Initially I got into it really for the design of it,” she told correspondent Conor Knighton. “I loved creating. I’ve always had an appreciation for art and good design. And it just so happened that pie was a really great medium.”

A great edible medium. Ko, who has zero culinary training and baked her first pie just four years ago, turns a few simple ingredients into complex works of art.

It all began with a photo of a peach pie. Ko only had 100 or so followers at the time, but the picture got five times as many likes.

Knighton asked, “So, where did those likes come from? Who were they?”

“I have no idea!” Ko laughed. “Maybe they were bots or trolls, and thought maybe I should put my account back on private.”

But Ko kept posting, and the likes kept coming. People were sharing her designs.

She now has more than 350,000 followers. “It was mostly kind of overwhelming,” said Ko. “I’m pretty shy. I’m pretty introverted.”

Ko struck a chord with her bright colors, repetitive patterns, and clean lines. It’s a unique style she calls “Pieometry.”

“I feel like it kind of encapsulates this genre of modern pie art that I’ve kind of ‘pie-oneered.’ Is that bad?” she laughed. “I know. There’s something very demoralizing about saying puns out loud, even though I write them so often.”

“Yeah. We need to talk about the puns. I’m glad you went there,” Knighton said.

Ko’s captions – “Eat Your Tart Out,” “All Strings Considered” – are always pie-pun hot.

It’s not all jokes, though. Last year, Ko collaborated with ad agency BBDO on a series called #MyAmericanPie, creating pies inspired by a diverse array of American experiences.

“I got to make a pie inspired by their story, by their heritage, by kind of the things that they shared,” said Ko.

This pie – blue and white, like the Honduran flag and Chinese porcelain – represents Ko’s American experience as the daughter of Honduran and Chinese immigrants.

It’s photographed in its unbaked state. Ko does that a lot with her work, a choice she’s learned can elicit some crusty reactions. Critics feel like that’s somehow cheating.

Ko said, “Obviously, the designs are most pristine before they go in the oven. And I kind of personally feel like the transformation of an art piece doesn’t really take away from its aesthetics or its kind of value, even if it changes along its journey.”

“Which, in fairness, if you put a Van Gogh in the oven, it’s gonna look different, too,” said Knighton.

Now, those curious about what Ko’s designs look like baked can find out for themselves. She recently released a “Pieometry” cookbook.

Pie art is now a full-time job for her.

“One of the biggest ironies of this journey is that I don’t really have a sweet tooth,” she said. “And I don’t actually love eating pies all that much!”

So, Ko gives away most of her creations to friends via an email list she’s dubbed the “PIE-peline.” It may be art, but it’s still meant to be eaten.

She said, “Especially in this year where we’re not having a lot of person-to-person interactions, it’s been a good way to kind of share what I’m making and bringing a little bit of joy to people around me.”

RECIPE: Happy As A Gram, from Lauren Ko’s “Pieometry”

“Pieometry: Modern Tart Art and Pie Design for the Eye and the Palate” by Lauren Ko (William Morrow), in Hardcover and eBook, available via Amazon and IndieboundLauren Ko, Lokokitchen (Instagram)Lokokitchen FAQ

Barack Obama speaks out on politics, life in the White House, and Donald Trump »