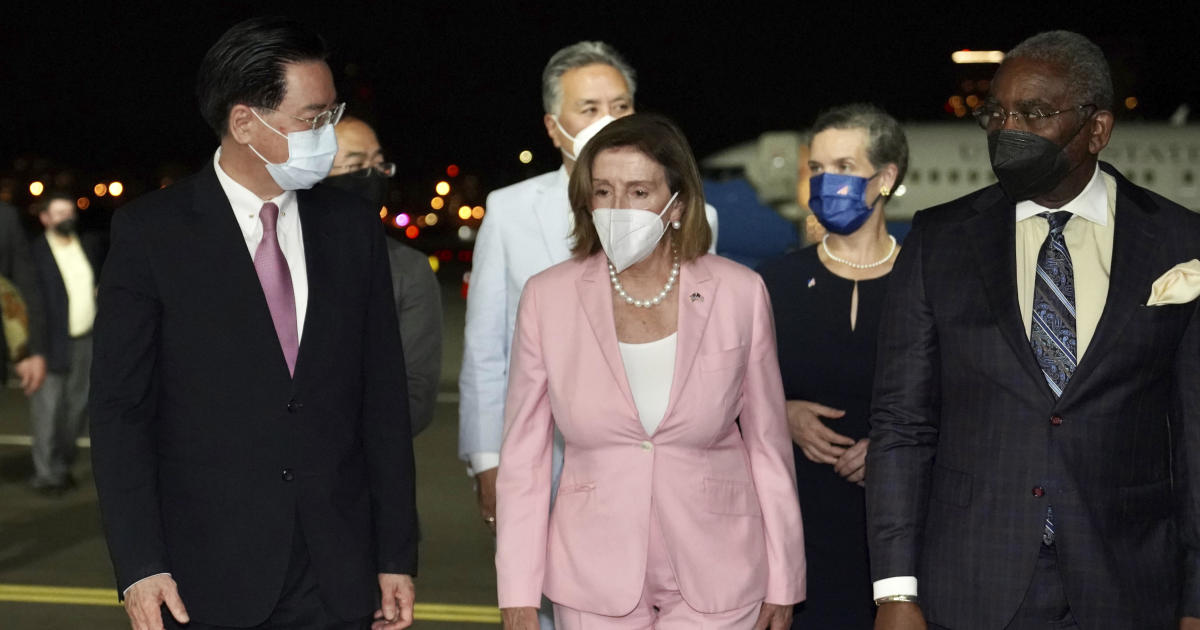 Pelosi lands in Taiwan amid high-pressure standoff with China

House Speaker Nancy Pelosi landed in Taiwan’s capital of Taipei on Tuesday, arriving for a controversial stop on her tour of Asian countries that has become a flashpoint amid rising tensions between the U.S. and China.

Pelosi and other members of Congress emerged from a U.S. military jet that touched down Tuesday evening in Taipei, where they were greeted by a contingent of Taiwanese officials on the tarmac. The plane traveled from Kuala Lumpur on a flight path that avoided the South China Sea and the Chinese mainland, according to the tracking website FlightAware.

Pelosi’s trip to Taiwan has been cloaked in secrecy and stoked the ire of Beijing, which raised the prospect of a military response to the visit. The White House has said it had no control over Pelosi’s decision to visit the island, and has insisted that there has been no change to U.S. policy toward Taiwan and the Chinese government.

As the second in line for the presidency, Pelosi is the highest-ranking U.S. official to visit the island in 25 years. The California Democrat’s history of pushback against Beijing dates back to 1991, when she displayed a pro-democracy banner in Tiananmen Square, defying Chinese officials.

In this photo released by the Taiwan Ministry of Foreign Affairs, U.S. House Speaker Nancy Pelosi arrives in Taipei, Taiwan, on Tuesday, Aug. 2, 2022.

In a statement shortly after the plane landed, Pelosi said her visit was meant to honor “America’s unwavering commitment to supporting Taiwan’s vibrant Democracy.”

“Our discussions with Taiwan leadership will focus on reaffirming our support for our partner and on promoting our shared interests, including advancing a free and open Indo-Pacific region,” she said. “America’s solidarity with the 23 million people of Taiwan is more important today than ever, as the world faces a choice between autocracy and democracy.”

The speaker emphasized that the visit “in no way contradicts longstanding United States policy” toward Taiwan and China, and said the U.S. “continues to oppose unilateral efforts to change the status quo.”

In an op-ed for The Washington Post explaining her rationale for the visit, Pelosi criticized Beijing’s actions in Hong Kong, Tibet, Xinjiang and across the mainland, saying China’s “abysmal human rights record and disregard for the rule of law continue, as President Xi Jinping tightens his grip on power.”

A Taiwanese government official said Pelosi was expected to meet with President Tsai Ing-wen and members of the legislature in Taipei. The U.S. delegation is expected to stay Tuesday night in the capital and hold meetings throughout the day Wednesday before departing.

The skyscraper Taipei 101, the island’s iconic tallest building, flashed messages welcoming Pelosi to the capital ahead of her arrival Tuesday evening.

The Taipei 101 building lit up with a message reading “Speaker Pelosi” as a welcome sign for House Speaker Nancy Pelosi’s visit in Taipei, Taiwan, on Tuesday, Aug. 2, 2022.

Beijing considers self-ruled Taiwan to be part of China, and Chinese officials have been warning they would regard Pelosi’s visit as a major provocation.

According to Reuters, Chinese foreign ministry spokesman Zhao Lijian said Monday its military would “not sit idly by” if Pelosi visited. During a daily briefing, Lijan said a visit by the “No. 3 official of the U.S. government” would “lead to egregious political impact.”

On Monday, National Security Council spokesman John Kirby confirmed Pelosi was traveling on a U.S. military aircraft, and he said she had been briefed on Taiwan.

“There have been direct conversations with the speaker and her staff before she left at various levels in the national security establishment,” Kirby said, though he did not confirm any plans by her to travel to Taiwan. “The president did not speak directly with the speaker about this trip.”

Kirby said “the speaker makes her own decisions” when asked if the military still believed it was not a good idea for her to go. “What we did was provide her context, analysis, facts, information, so that she could make the best decision possible for every stop for every overseas travel,” Kirby added.

But Kirby warned about China’s “saber rattling,” including military provocations such as potentially firing missiles into the Taiwan Strait and large-scale air entry into Taiwan’s air space. He also mentioned diplomatic escalations, like Beijing’s public assertion last week that the Taiwan Strait is not an international waterway.

“Some of these actions would continue concerning trend lines that we’ve seen in recent years, but some could be of a different scope and scale,” Kirby said. “Last time Beijing fired missiles into the Taiwan Strait was 1995 and 1996 after Beijing reacted provocatively to Taiwan’s president’s visit to deliver an address at his alma mater.”

The split between Taiwan and the mainland government began in 1949, when Chinese nationalists fled to the island amid a civil war with the Chinese Communist Party. The Taiwanese government considers itself the legitimate government of China. Beijing views the island as a breakaway rogue state and part of its own territory.

The U.S. recognized Beijing as the legitimate Chinese government in 1979 and does not support Taiwanese independence, but maintained informal ties with the government, following a policy of “strategic ambiguity.” A 2018 law known as the Taiwan Travel Act made the U.S.-Taiwan relationship official, but below the level of formal diplomatic ties.

Pelosi is not the first House speaker to visit Taiwan. Former Speaker Newt Gingrich, a Republican, visited in 1997. Other American officials have made low-profile visits to Taiwan to show support to the island, but Pelosi’s visit has garnered much more attention.

« Monkeypox: What we know about the outbreak, vaccinations and treatments