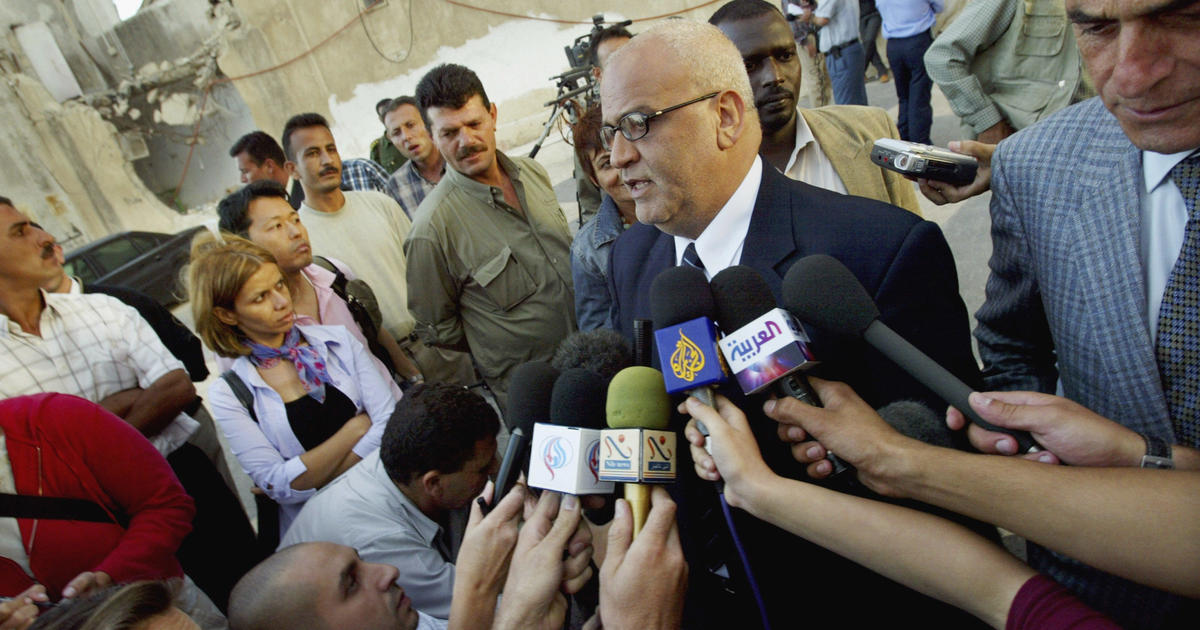 Palestinian Authority parliament member Saeb Erekat talks with the press before a meeting at the Palestinian parliament, in a September 6, 2003 file photo taken in Ramallah, West Bank.

Jerusalem — Saeb Erekat, a veteran peace negotiator and prominent international spokesman for the Palestinians for more than three decades, died Tuesday, weeks after being infected by the coronavirus. He was 65. The American-educated Erekat was involved in nearly every round of peace negotiations between Israel and the Palestinians going back to the landmark Madrid conference in 1991, when he famously showed up draped in a black-and-white keffiyeh, a symbol of Palestinian nationalism.

It was a gesture that made him a hero to many at home, but caused a stir among foreign dignitaries.

Over the next few decades Erekat was a constant presence in Western media, where he tirelessly advocated for a negotiated two-state solution to the decades-old conflict, defended the Palestinian leadership and blamed Israel for the failure to reach an agreement.

His Fatah party announced his death in a statement. A relative and a Palestinian official confirmed he passed away, speaking on condition of anonymity out of privacy concerns. Erekat is survived by his wife, two sons, twin daughters and eight grandchildren.

Rest In Peace my peace brother. Your commitment to pursuing freedom for your people by peaceful means will shine forever as a beacon that will guide them onwards. May your memory be a blessing to Naema and your family and all those who loved you. https://t.co/Q1q8CBKcjM

Former U.S. Ambassador to Israel and U.S. special envoy to the Middle East Martin Indyk praised Erekat as a “brother,” saying: “Your commitment to pursuing freedom for your people by peaceful means will shine forever as a beacon that will guide them onwards.”

CBS News correspondent Imtiaz Tyab says Erekat’s position at the heart of the Palestinians’ struggle for statehood over a generation saw him break barriers, attract huge international attention, and earn wide respected for his forthrightness and determination.

But he was often on the receiving end of criticism, too, including from some of his fellow Palestinians.

Israelis would accuse him of being an extremist and for sowing division, while some Palestinians dubbed him a traitor for agreeing to give away too much in negotiations with Israel.

Two years after his eyebrow-raising 1991 appearance at the Madrid peace conference, Erekat was left out of final talks on the Oslo Accords — a pair of landmark agreements between Israel and the Palestinians that was negotiated by then Palestinian leader Yasser Arafat.

But in 1995, Erekat would ascend to the role of chief Palestinian negotiator.

As the second “intifada,” or Palestinian uprising, waxed and then waned by the mid-2000s, Erekat described a growing pessimism at what he called Israel’s “failure” to deliver on its promises; the rapid expansion of Israeli settlements, which are considered illegal under international law, and the construction of Israel’s separation wall, which is now over 400 miles long.

Peace talks, he would say, were all too often out of sync with the reality for Palestinians on the ground.

FDA approves emergency use of monoclonal antibody for COVID-19 »