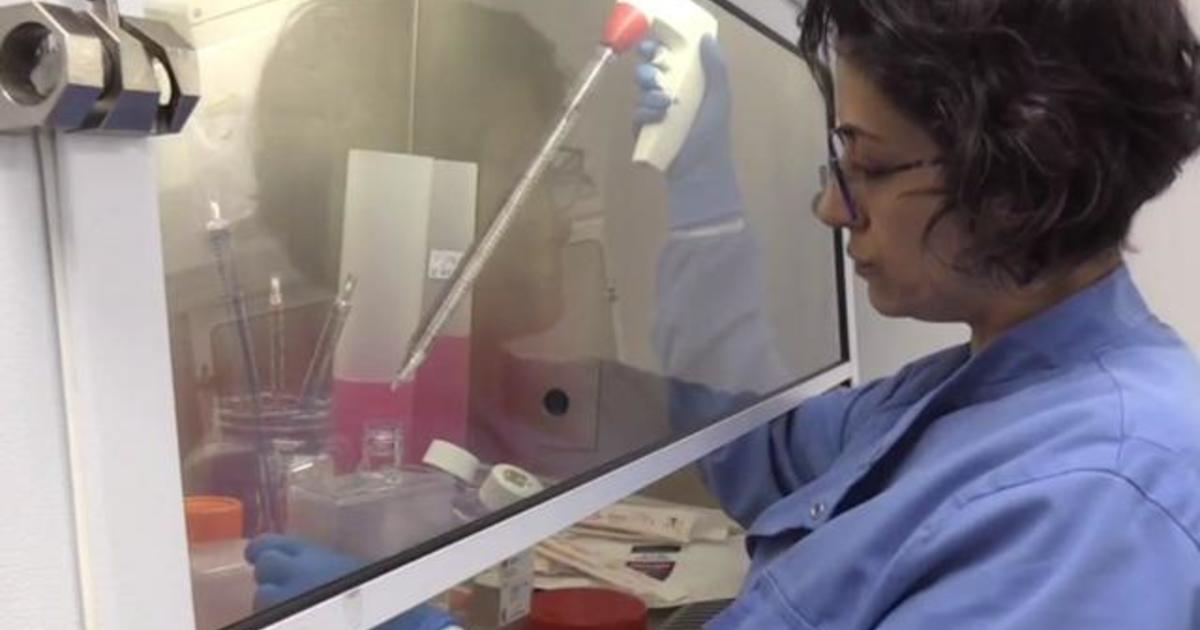 London — A senior British official has called the latest news on an Oxford University team’s potential coronavirus vaccine “extremely encouraging.” The results of the Phase I/II trial of the vaccine being developed by Oxford’s Jenner Institute, in conjunction with pharmaceutical giant AstraZeneca, showed that it is safe and “produced strong immune results,” according to the research published on Monday in The Lancet medical journal.

The vaccine caused a 2-pronged immune response, a news release from the Jenner Institute at Oxford said. First, within 14 days, it triggered a T cell response, generating white blood cells that can attack infected cells. Second, within 28 days, it provoked an antibody response. Antibodies are able to prevent the virus from infecting cells when it is initially contracted, according to the release.

A photo provided by the COVID-19 Vaccine Team at the University of Oxford’s Vaccine Centre in England shows a researcher working on the manufacture of a potential vaccine for the disease caused by the new coronavirus.

The U.K. Phase I/II trial began in April and involved more than 1,000 healthy volunteers who were between 18 and 55 years old. Some of those volunteers received a second, booster dose of the vaccine, and they appeared to benefit most.

“We saw the strongest immune response in the 10 participants who received two doses of the vaccine, indicating that this might be a good strategy for vaccination,” Professor Andrew Pollard, Chief investigator of the Oxford Vaccine Trial at Oxford University and co-author of the study, said.

Oxford is working with AstraZeneca to develop, manufacture, and produce a coronavirus vaccine on a large scale. The unprecedented effort aims to make some 2 billion doses of the vaccine available globally, through partnerships with manufacturers in several countries, by early next year.

While the latest results are encouraging, they show the candidate vaccine creates the reaction in the body that should create immunity to the disease. The Phase III trials, to prove it actually gives people that immunity, are already ongoing, involving a far larger sample of people, in the U.K., the United States, Brazil, and South Africa.

“While there is more work to be done, today’s data increases our confidence that the vaccine will work and allows us to continue our plans to manufacture the vaccine at scale for broad and equitable access around the world,” Mene Pangalos, Executive Vice President of BioPharmaceuticals Research and Development at AstraZeneca, said.

The U.S. government has invested a whopping $1 billion in Oxford’s trial vaccine already, gambling on it being a success to secure millions of doses as soon as possible.

Britain has also poured about $90 million into the work by Oxford’s Jenner Institute for vaccine research. On Monday, British government Business Secretary Alok Sharma called the latest trial results “extremely encouraging, taking us one step closer to finding a successful vaccine to protect millions in the U.K. and across the world.”

The Oxford vaccine has been out in front of about 15 serious global competitors for months, but a few others are hot on the team’s heels.

Just last week, officials announced similarly hopeful results from Phase I trialing of a vaccine being developed by the National Institutes of Health and Moderna Inc. The experimental vaccine will move to its most important step around the end of July: A 30,000-person study to prove the shots are effective at stopping coronavirus infection.

The U.K. vaccine news was published Monday in The Lancet along with another study on a Chinese vaccine trial. That vaccine also showed promise, creating a strong antibody and T cell response in more than 90 percent of those given the injection after 28 days.