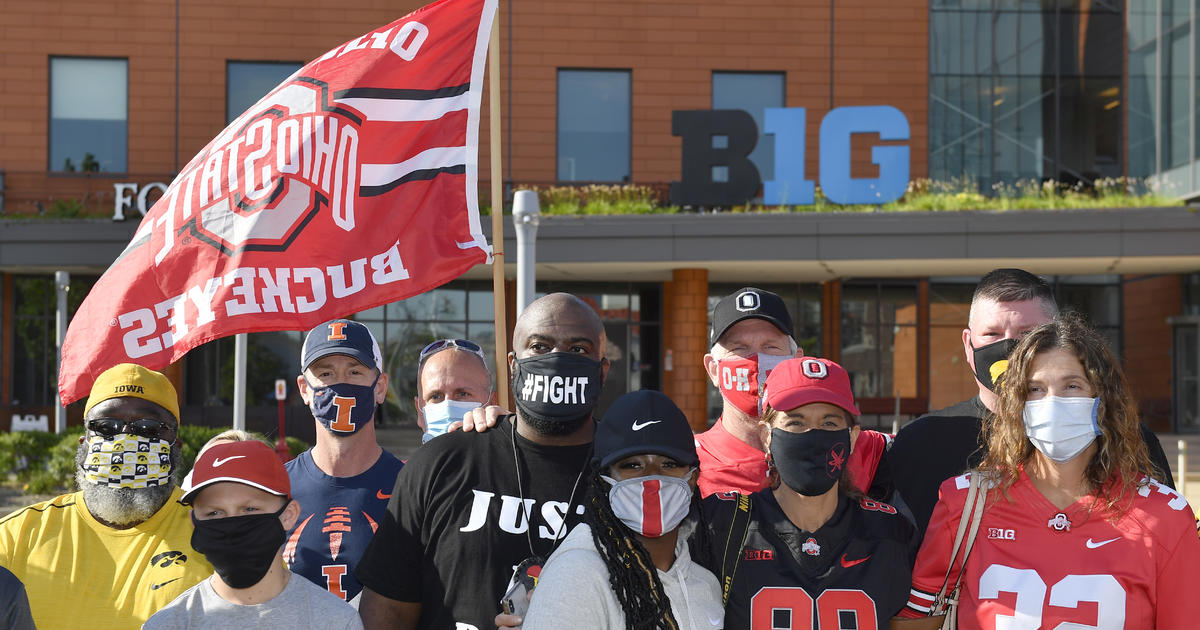 Trump says he didn’t lie about the coronavirus

5 things to know about mass testing for COVID-19

NFL in uncharted territory as new season kicks off amid pandemic

Russia, China and Iran ramping up attacks ahead of election, Microsoft warns

Big 12 going ahead with football season

Big 12 going ahead with football season

As pressure mounts on the Big Ten conference to hold its college football season this fall, Ohio Attorney General Dave Yost thinks that Ohio State University should sue the Big Ten conference if the conference does not reverse course to start the fall college football season. Yost, a Republican, told CBS News in an interview that Ohio State has the legal basis to sue the Big Ten over a breach of contract. Yost said his office is researching contracts and they hope to have the conference’s governing documents on Friday.

He added that his legal team “has seen enough” to determine that there is a cause for action and are “ready to recommend to Ohio State that they seek their legal redress” if the football season remains canceled. Yost acknowledged that the COVID-19 is a health issue, but noted there needs to be a balance for the personal and the financial consequences as well due to the cancellation of the college football season.

The college football season has already started as some teams have already played games, but the Big Ten conference announced on August 11 that they will cancel the fall football season with the possibility of starting the season in the spring. In a statement on August 11, Big Ten Commissioner Kevin Warren cited potential medical risks student athletes could face this fall as the COVID-19 pandemic continues to impact college campuses.

Randy Wade, father of Shaun Wade of the Ohio State Buckeyes, and Big Ten parents pose for photo during a rally outside to the Big Ten Conference headquarters on August 21, 2020 in Rosemont, Illinois.

“The mental and physical health and welfare of our student-athletes has been at the center of every decision we have made regarding the ability to proceed forward,” Kevin Warren said in a statement. “As time progressed and after hours of discussion with our Big Ten Task Force for Emerging Infectious Diseases and the Big Ten Sports Medicine Committee, it became abundantly clear that there was too much uncertainty regarding potential medical risks to allow our student-athletes to compete this fall.

On Thursday, President Trump advocated for the football season to start and added that people are working “very, very hard” to accomplish that goal. “We want to see Big Ten football,” Mr. Trump said at a White House press briefing. “We hope it is coming back.”

Yost told CBS News iIf the Big Ten conference determines to hold its college football season this fall, Yost said that the “basis for the violation of contract goes away and the lawsuit is irrelevant.” In addition, Yost argued that universities who also consider withholding playing this season should be sued. He pointed to high school sports and the NFL plowing ahead with football this fall.

“It’s one thing if your university acts and your administration feels that it’s just too risky and you don’t want to play football, that’s one thing,” Yost said. “You opt out, okay? Everybody understands. But when you say, ‘not only do we want to opt out, but we want to substitute our judgment for yours and tell you that you can’t,’ that’s where the problem comes in.”

The Big Ten did not immediately return a request for comment. CBS sports reported at the end of the August that Ohio State University was one of three colleges that voted to play this fall. A potential lawsuit against the Big Ten is the latest push for the conference to start its college football season. Earlier this week, Republican state legislative leaders from Iowa, Michigan, Minnesota, Ohio, Pennsylvania and Wisconsin – all states that are home to members of the Big Ten – urged Warren to reconsider the Big Ten’s decision arguing that the conference and its student athletes are at a “disadvantage” for not playing. “These athletes are losing a vital part of student life and are becoming less marketable to future employers with each passing week,” the letter says. “Additionally our local universities stand to lose hundreds of millions of dollars that support vital student scholarships.”