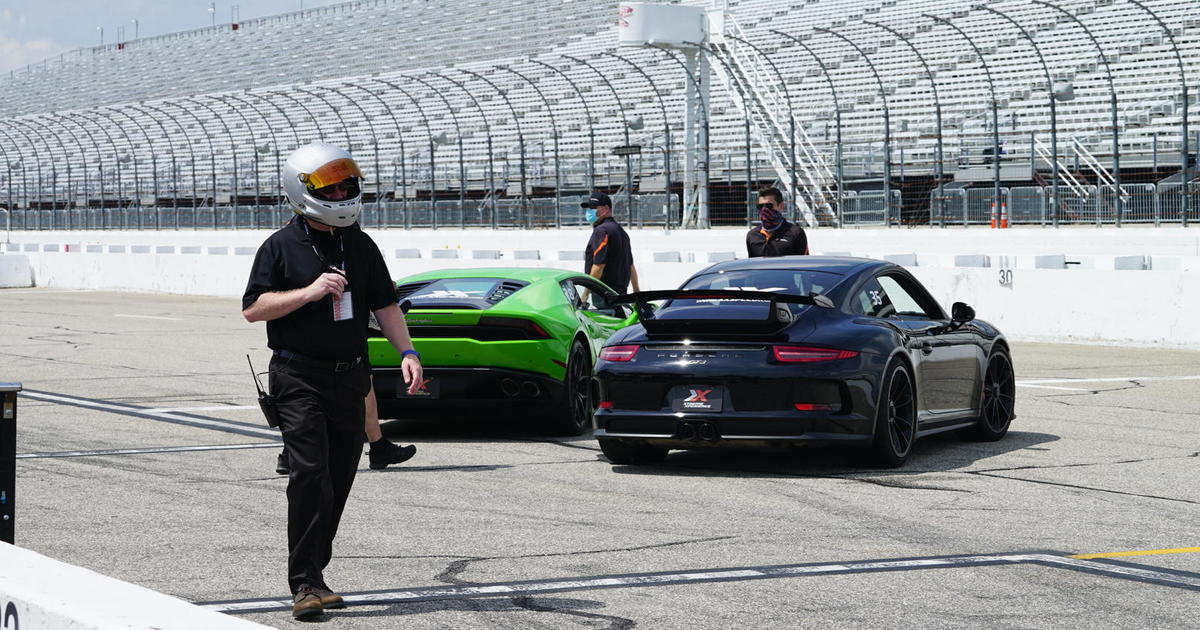 New England Trump supporters on his defense of “heritage”

Loudon, New Hampshire — On a summer Friday in Loudon, racing and politics intersected at the starting line of the 1.058-mile oval known as New Hampshire’s “magic mile,” as race car enthusiasts flocked to an exotic car exhibition. Just 44 miles east, organizers readied the Portsmouth International Airport for what was supposed to be President Trump’s his first rally in a swing state since the coronavirus pandemic began. The mega-event was called off at the last minute, with weather concerns cited as the official reason. NASCAR — the distinctly American pastime with Southern roots extending back into the 1950s— announced last month it will ban Confederate flag displays at events and properties, a move disparaged by the president. And while New England’s fiercest political battleground does not host many competitive sports teams – no MLB, NFL or NHL — it is home to NASCAR’s only Cup Series in New England. John Waterhouse, who voted for Donald Trump in 2016 and works in sheet metal fabrication, understood NASCAR’s decision.

“It was a symbol of not very good things. Leave well enough alone,” he said. “I can’t see me driving down the road with a Confederate flag. I think some people do that because they don’t understand how history comes into play.”

For his part, Mr. Trump has defended the symbol of the Confederacy. In an interview that aired on Fox News Sunday, the president doubled down on his vow not to rename military bases dedicated to Confederate generals. “When people proudly have their Confederate flag, they’re not talking about racism. They love their flag,” Mr. Trump said. Love for the Confederate flag is a frequent talking point for Mr. Trump, who told CBS News on Tuesday, “Well, people love it – I know people that like the Confederate flag and they’re not thinking about slavery. I look at NASCAR. You go to NASCAR, you had those flags all over the place. They stopped it.” “I don’t think he should have weighed in at all,” Waterhouse continued. “That’s just a sport. He’s doing that for his base.” He added that “the virus” should be taken above all else. Waterhouse has yet to decide who he’ll vote for come November, but knows it will not be Mr. Trump. “He won’t be getting my vote this time. I vote the person, not the party.”

Days after NASCAR banned the Confederate flag, the FBI investigated a noose found in the garage of NASCAR’s only top-level Black driver, Bubba Wallace, at Talladega Superspeedway. Following an outpouring of support from fans and NASCAR alike, authorities discovered the noose in Wallace’s garage had been there since October 2019.

In a tweet, Mr. Trump wrote that Wallace should have “apologized” following the appearance of a noose-like rope. “That & Flag decision has caused lowest ratings EVER!” Mr. Trump tweeted. David Spero II, from Atkinson, New Hampshire, called the tweet “a giant mistake.” Lingering near a shiny BMW, he considered the president in the way you would a beloved uncle or longtime family friend. “I think he should shut his mouth more, even though I love the guy dearly,” 68-year-old Spero sighed. But 400 miles north of the Mason- Dixon line, the appearance of a Confederate flag is not easily conflated as a display of “heritage” for those who trace their family lines back to fallen Union soldiers or Ellis Island. The former mason and small business owner conceded that Mr. Trump “just keeps shooting himself in the foot,” but added, “Despite all that, look at what he’s done for the country over the past four years. It’s irrefutable. The guy’s incredible.” In the course of a 20-minute conversation describing Mr. Trump, the words “assertive,” “rude,” and “crass,” surfaced, but did not undercut Spero’s bottom line when it came to backing the president. “He’s frickin’ effective.” His son, David Spero III, chimed in. “It’s petty,” he said of Mr. Trump’s comments on heritage, NASCAR and Confederate symbols. “But we have nobody from either side standing up.” The owner of a local gym, who balances another full-time job at a technology company, did not vote in 2008, but appreciated the finesse and discipline of former President Obama. “Obama was polished. I don’t see Joe Biden running the country better. He’s not a businessman.” He paused to pull a young David Spero IV off his shoulders. “I don’t like either side. But I’m going to vote for the devil I know. And that’s Trump.” Defenders of the White House point to nationwide demonstrations in the wake of George Floyd’s death as cause for the president’s concern. “President Trump didn’t start this culture war but he will fight it,” Trump campaign communications director Tim Murtaugh declared twice during a campaign virtual event in early July. Since June, Mr. Trump has tweeted 10 times about “heritage,” messaging that has coincided with a condemnation of “cancel culture.” The president still has not denounced a “white power” slogan yelled out by a supporter in a video the president tweeted, last month. An ABC News / Washington Post poll released Sunday shows voters overwhelmingly trusted Joe Biden when it comes to race relations. The former Vice President leads by a whopping 25-point margin on the issue, 58-33%. CBS News’ Battleground Tracker shows Mr. Trump trailing Biden 53%-45% in the state. Hillary Clinton won New Hampshire by less than 3,000 votes in 2016, and it’s a state that Republicans are eager to flip in 2020. New Hampshire co-chair for the campaign, ardent Trump supporter Al Baldasaro, praised Mr. Trump on issues ranging from economics to immigration. But when it comes to his defense of Confederate symbols, he admitted he does not always see eye-to-eye with the president. “I support the president, but about 95%. I’m not with him 100%. I’m not with anyone 100%,” he laughed, before citing an old Reagan adage. “If you agree with me 80% of the time, you’re an 80% friend and not a 20% enemy.” Aides and advisors to Mr. Trump promise he will return to the Granite State, though Mr. Trump has begun hosting “tele-rallies” via Facebook Live instead of in-person events. When he does return to New Hampshire, Republican political consultants say the president would serve himself well by sticking to economic talking points.

Monuments “are a sideshow for New Hampshire voters compared to how the president has handled the coronavirus. You’re worried about your kids going back to school in the fall, the economy’s slow recovery,” one veteran New Hampshire operative told CBS News. “Given all that, I don’t know that the message about confederate monuments is going to have the effect they hope. It does more toward rallying the base than persuading independent voters.” Al Fulchino considers himself to be a part of that base. The businessman who owns a popular winery in Hollis, New Hampshire, hosted Ivanka Trump there in 2016. “I believe he loves the country in a way that the current crop of democratic socialists does not,” Fulchino remarked, before offering some advice to Mr. Trump. “I’m 100% behind you. But I want you to tell me, Mr. President. Why does Bubba Wallace need to apologize? I’m willing to hear you out. Do you know something we don’t know?”