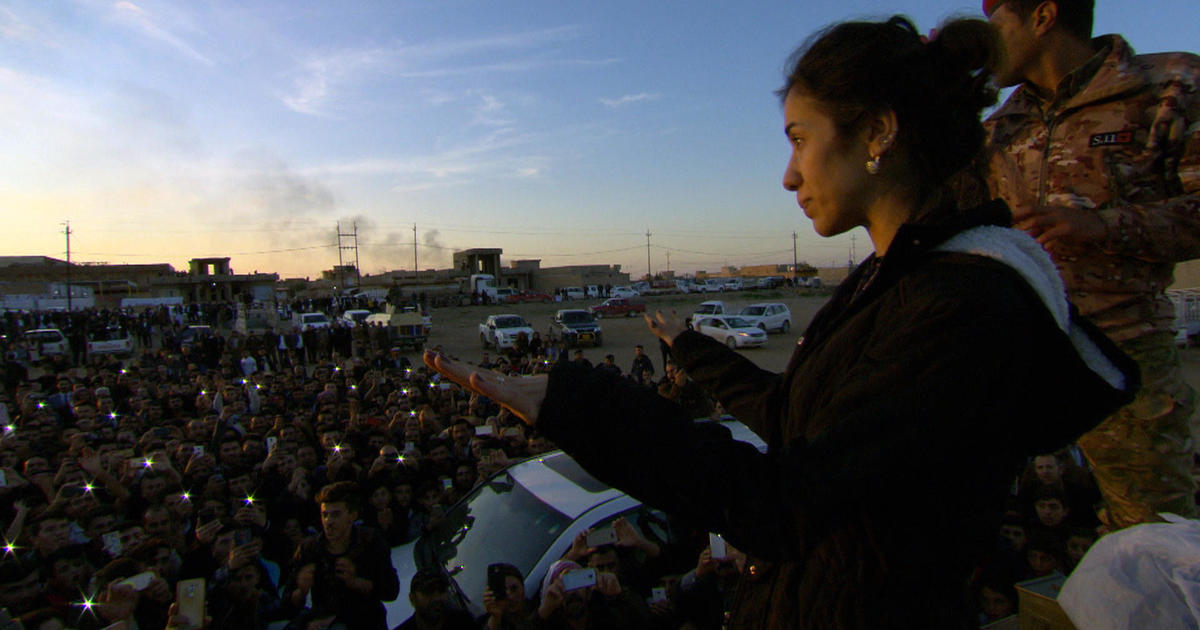 She wore a scarf in our first interview because she did not want you to know her. She was a humble 21-year-old from a poor farm family. Her dream was to own a hair salon in her village of nearly 2,000, but that was before the massacre. She didn’t want to be on 60 Minutes, but she needed the world to know what ISIS did: the murder, the rape, the genocide of her people. Nearly six years ago, in Iraq, we discovered this hesitant, frightened, woman. We did not imagine that her scarf concealed not only her identity, but also a fierce invincibility which would lead her, four years after our interview, to the highest honor the world has to give.

We found her here, among refugees who survived the invasion of the ISIS terrorist army. Her people are Yazidis, a minority in northern Iraq that is poor, persecuted and bound by faith to its revered Mount Sinjar. In 2014, ISIS invaded. Two months later, we came to report on the atrocities of the self-described Islamic State.

Scott Pelley in 2015: Of course, no country on earth recognizes that state, but if it had a border, this would be it.

Beyond that border, was the Yazidi homeland where the faithful practice a religion that predates Islam by 3,000 years. In ISIS’s perversion of the Muslim faith, the Yazidis were non-believers condemned to slavery and death.

Nadia Murad (Translation): On Friday, August 15th at 11:30am, they entered our village and told us all to come to the school. There the women and kids were put upstairs and the men downstairs. Scott Pelley: What happened to you at that point?

Nadia Murad (Translation): As we were entering the school, I was with one of my brothers. There, we saw a bulldozer and I asked my brother “Why is there a bulldozer here?” He replied, “To throw dirt on the bodies when they’re done killing.”

Her brother was right. The Yazidis, about half a million, were defenseless civilians. Thousands of men, and elder women, were executed. Boys, age seven and older, were forced into the ISIS army.

Scott Pelley: What happened next?

More than 3,000 women and girls, as young as nine, were trucked into slavery. She says she was sold and raped, sold and raped again, and then gang raped after a failed escape.

Scott Pelley: What about the other members of your family?

She seemed broken. But, as our interview went on, her confidence grew as though she came to realize she wasn’t speaking for herself, she was speaking for her people. Months later, she settled in Germany, joined a human rights group, and campaigned for justice. In 2018, the world learned her name because Nadia Murad was awarded the Nobel Peace Prize.

The 2018 peace prize was meant to expose atrocities women suffer in war. The honor was shared with Denis Mukwege whose hospital treats the sexually assaulted in the Democratic Republic of Congo.

Scott Pelley: I’m curious why you chose to speak with us five years ago?

Nadia Murad (Translation): At the beginning, rape was a big shame for me and for others to speak about. Because it would have remained a shame on you, on your family and on your people. The biggest incentive that made me talk was those left behind, including my mother and sisters. I knew what was happening to those in the captivity of ISIS.

Nadia Murad was captive nine days when the last man who bought her left a door unlocked. Kindhearted strangers smuggled her across the Islamic State line. She became a U.N. human rights ambassador, began learning English, wrote a memoir, and vowed to see ISIS in court. But, for that, she needed a lawyer.

Amal Clooney: I met Nadia after a colleague called me and said, “I have a new case for you.” And I said, “No thanks. I’m busy.” And he said, “There’s just an extraordinary young woman I want you to meet. Give me an hour.”

It didn’t take an hour for leading human rights attorney, Amal Clooney, to take the case.

Amal Clooney: I saw it as a test of the international system. It was so egregious because it involved ISIS, it involved a clear case of genocide. It involved sexual slavery to– at a scale that we haven’t seen in modern times and I thought if the U.N. can’t act in this case then what does the international rule of law even mean?

By 2015, not one free Yazidi remained in their homeland. This wasn’t just war. By international law, the executions, rape, and kidnapping were war crimes.

Amal Clooney: This was the same dilemma that the world had after the atrocities of Nazi Germany. And it’s the U.S., under President Truman and President Roosevelt that said, “No, we have to have trials, because there must be a judicial record of the atrocities committed by the Nazis.” Because today, you do have people denying that there were gas chambers and– and what do you have to point to? You can go back and say, “Well, there are 4,000 documents that were submitted as exhibits in the Nuremburg Trials.” And the Yazidis deserve nothing less than that.

And there might be similar stacks of evidence of the crimes against the Yazidis, but Clooney feared securing it was a race against time.

Amal Clooney: You had mass graves that weren’t secured, where the Yazidis knew their relatives were buried and nobody was exhuming them. And also, I noticed that witnesses were becoming more and more reluctant to speak out as time went by. So, you know, there was only so much we could do as a small team of lawyers. And we said, “This is the responsibility of the U.N. and it’s the responsibility of the most powerful body within the U.N., which is the Security Council.”

Scott Pelley: Had you ever heard of the U.N. Security Council?

In 2015, just a year after we met her, Nadia Murad asked the security council to hold ISIS accountable.

Nadia Murad (Translation): I’ve seen what they’ve done to boys and girls, all those who commit the crime of trafficking and genocide need to be brought to justice.”

The security council voted to approve a first step. In 2017, it created an investigative team to collect evidence of ISIS’s crimes in Iraq. The team began exhuming some of the 202 mass graves that are known. Now, the question is, whether the evidence will ever be heard. Iraqi courts are convicting thousands of ISIS suspects of terrorism. But none has been tried for the crime of genocide against the Yazidis.

Small pockets of ISIS fighters remain in Syria and Iraq. But U.S. And Iraqi troops have shattered ISIS as a cohesive military force.

Scott Pelley: Is that justice?

Amal Clooney: Absolutely not. You know, if you speak to Yazidi witnesses, victims, survivors, they will say, “It doesn’t help me if somebody’s killed in a drone strike.” In terms of justice, that means something very different. That means being able to be in a courtroom and look their abusers in the eye and tell the world what happened. What ISIS did to them. And that hasn’t happened yet.

It has happened before in other atrocities. Last year, a U.N.-backed court in Cambodia convicted two former officials of genocide, 40 years after the Khmer Rouge murdered 1.7 million. Beginning in the 1990’s, U.N. war crime trials were held for the former Yugoslavia and Rwanda. But Iraq is not a member of the international criminal court and has not agreed to war crime trials of its own.

Amal Clooney: What we would like to see is an openness by the Iraqis to actually have international judges be involved in these trials. Potentially international prosecutors. There are different ways of designing it. You know, the Iraqi government could enter into a treaty with the U.N. or there could be an international court and the Iraqis could agree to transfer those responsible for international crimes to that court.

Nadia Murad returns to her home

Today, peace, if not justice, has settled into the folds of Mount Sinjar. Four days after accepting the Nobel, Nadia Murad returned with the Yazidi man she would soon marry and two replicas of her peace prize.

This is what the absence of justice looks like. The demands of the desperate focused on a woman, abducted at 21, and now returning bearing the weight of a seven-ounce medal.

Nadia Murad (Translation): The morning that I won the Nobel Prize, I asked my husband, Abid, to see if there was a way I could decline because the prize would make my life difficult. But, fate and God sometimes bring you something so that you can stop crimes and help others.

Scott Pelley: Has the Nobel Prize changed your hopes for the future?

Nadia Murad (Translation): Now people look at me like I can rebuild Sinjar, that I can bring more help for the victims and that I can take care of the orphans. But, without support, this is not going to happen by just having a Nobel.

In her village, she said, “I have left a Nobel Prize at the Iraqi parliament. I hope Iraq, after 4,000 years, will recognize Yazidis. We have always been second class citizens.” Later, she walked to a site that held the answer to the desperate question she asked in our first interview. The long, green depression in the earth was a mass grave. Her mother’s grave.

Scott Pelley: You left a replica of your Nobel Peace Prize at your mother’s grave.

Scott Pelley: What do you think she would have thought of that?

Nadia Murad (Translation): I wonder if she knows that I have talked to the world about her silent death, the killing of her six sons and her two nieces. I often feel that what I have been doing is because of her. I wish that she would know about it she may be happy because the world now knows what ISIS has done.

This is the school where Nadia Murad was separated from her family. Five years later, the murdered and missing are present, but unaccounted for.

Scott Pelley: Altogether, Nadia, how many members of your family were murdered?

Nadia Murad (Translation): We were 48 brothers, mothers, sisters, nephews and nieces in our family. Nine were killed and three are missing. The rest, who were rescued, now live in refugee camps.

There isn’t much for refugees to return to. Yazidi homes were wrecked or looted of everything but memories.

Today, Nadia Murad is navigating without a chart, steering by the constellation of her people’s dreams. An accidental leader facing questions she cannot answer. Will they have homes? Will there be justice? It’s estimated as many as 5,000 Yazidis were murdered, 6,000 abducted. Nearly 4,000 are missing still. With no international trials scheduled for these crimes, evidence from mass graves is being entombed in Baghdad where it will wait until the world that hears her voice, shares her courage.