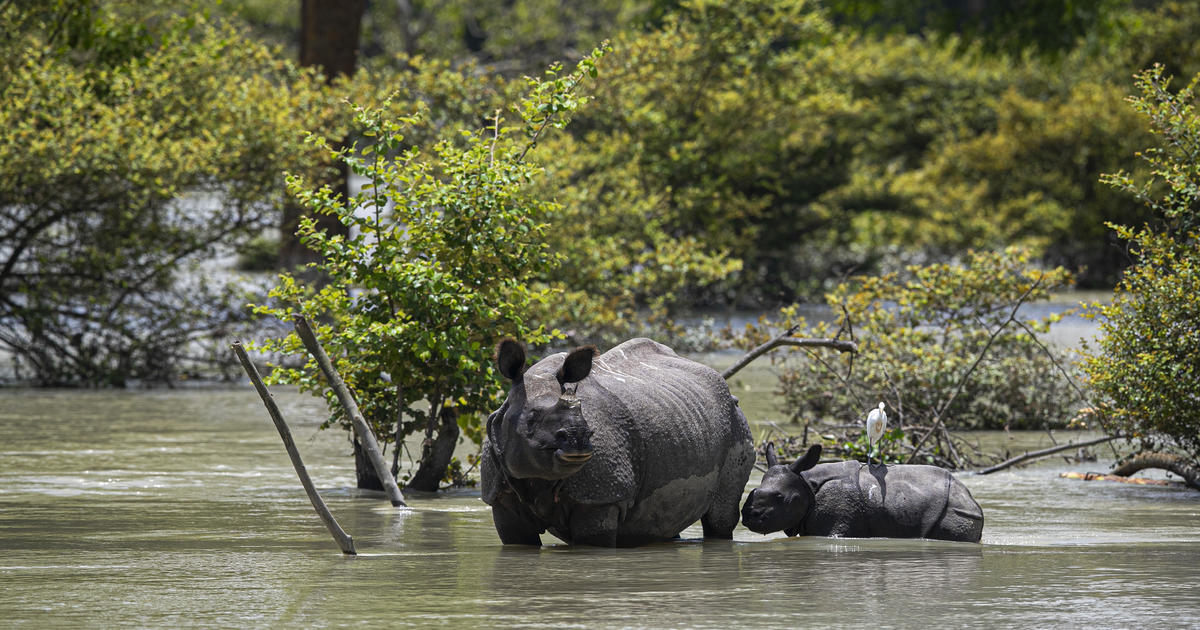 National Disaster Response Force (NDRF) personnel carry a sick woman during a rescue operation in a flood affected area due to monsoon rains, in the Barpeta district of India’s eastern Assam state, July 12, 2020.

New Delhi — Flooding caused by heavy seasonal rainfall has killed more than 80 people in northeast India. The deluge has forced more than 2.5 million people to flee their homes since May in the state of Assam, known for its lush green tea gardens and a famous wildlife park.

The flood waters have washed away more than 10,000 homes across the state, forcing authorities to set up 300 relief camps in the region. Relief work has been hampered, however, by the rising number of coronavirus cases in the country.

More than 1.1 million people have tested positive for COVID-19 as of Monday, and the disease has killed over 27,000 people in India. In the crowded relief camps, enforcing social distancing and the wearing of masks has proven a challenge for authorities.

Several hundred villages have been completely cut off by the high water, making relief and rescue work even tougher.

Authorities say 85% of Kaziranga National Park in Assam, home to an estimated 2,500 endangered one-horned rhinos, is under water. More than 100 animals, including nine of the rhinos, have drowned in the floods as of Monday, according to park authorities. The vast majority of the world’s surviving one-horned rhinos live in Kaziranga.

A one horned rhinoceros and a calf wade through flood water at the Pobitora wildlife sanctuary in Pobitora, Morigaon district, Assam, India, July 16, 2020. Flooding has also inundated most of nearby Kaziranga National Park, home to an estimated 2,500 rare one-horned rhinos.

The flooding has pushed the national park’s wildlife up onto elevated roads and closer to humans in the area. Authorities tweeted video of rangers and police guiding traffic around one of the rhinos after it appeared to lay down in exhaustion on a busy road near the park over the weekend.

“I can say that it’s one of the worst floods in the state and in the park in the recent times,” Assam Forest Minister Parimal Suklabaidya told the AFP news agency.

A rhino have strayed out near bandar dhubi area at Bagori Range yesterday and taking rest near NH37. The DRIVE OUT Operation is being carried out to guide the rhino to park. Our staffs along with @nagaonpolice are guarding the area. Drive Slow.@ParimalSuklaba1 @RandeepHooda pic.twitter.com/3avQXbqtHF

The Assam government said on Monday that the Brahmaputra river — known as the “Sorrow of Assam” for its tendency to burst its banks and flood surrounding villages — was running “above danger mark” in 24 of the state’s 33 districts.

The river, which flows through Tibet, Bangladesh and India, first breached its banks in Assam last month, flooding large swaths of the state. In the wider region, including eastern India, Nepal, and Bangladesh, this year’s monsoon rains and flooding have killed more than 200 people and displaced 4 million.

That toll includes 67 deaths and 2.6 million people who have been displaced in Bangladesh.

Authorities in all three countries have warned there could be further damage and destruction due to the floods, as more heavy rainfall is predicted. The annual monsoon rains usually fall between June and September, causing deadly flooding and destruction in the region every year.