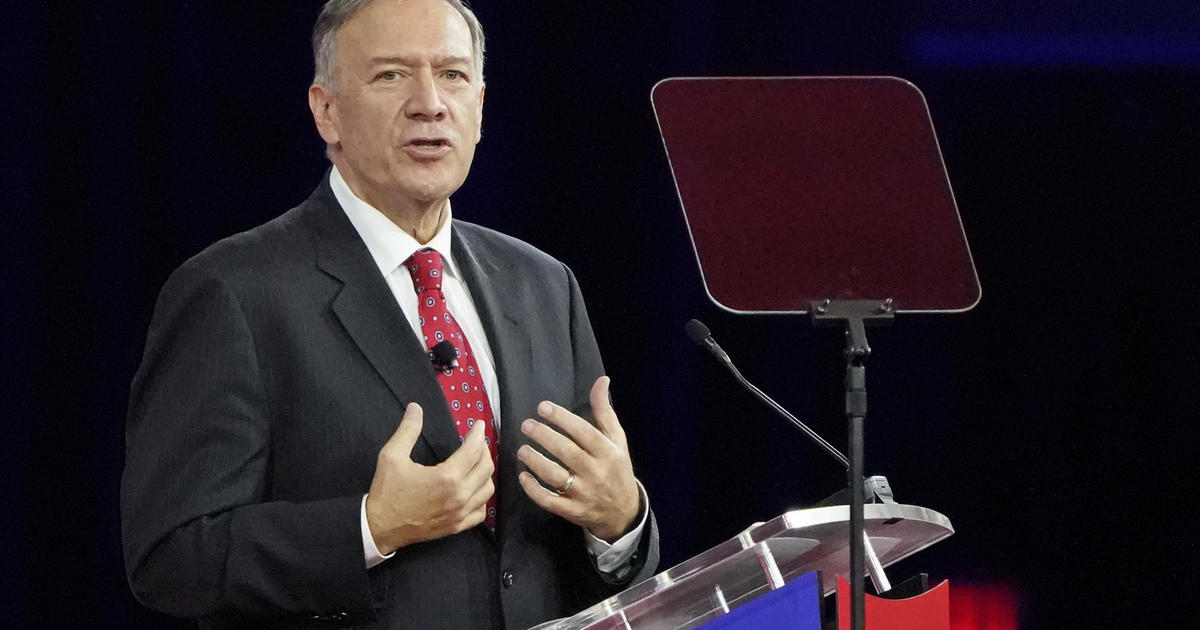 Mike Pompeo campaigns for midterms and mulls a presidential run

Former Secretary of State Mike Pompeo is considering a run for president as he travels around the country supporting Republican candidates in 2022 midterm races.

“We’re doing the kinds of things one might do, at least as we see it, to get ready for that moment,” Pompeo said. “But it doesn’t mean we’ve made our decision.”

On “The Takeout” podcast this week, Pompeo told CBS News chief Washington correspondent Major Garrett that the operation he’s using to campaign for candidates this fall would form the infrastructure of a presidential campaign, should he choose to run.

“You can’t do it from a standing start,” he said.

Pompeo downplayed the potential impact of former President Donald Trump on the race if he chooses to run, saying that it “won’t make any difference” to his own decision. Pompeo admitted it would cause some discomfort to run against his former boss and speculated that it would also make Trump uncomfortable.

“If you think you’re the right person and everything else lines up, you ought to go do it and then let the American people sort it out,” he said.

However, were Trump to win the 2024 nomination, Pompeo said he would not only support him but he’d also gladly serve in his administration again, if asked.

“If I think I can help the team and make a difference and deliver on the things that matter to me and my family and to our country, I’m confident that I wouldn’t turn down that duty.”

That doesn’t mean Trump hasn’t made mistakes, Pompeo said. He thinks the former president bears responsibility “on some level” for the assault on the U.S. Capitol on Jan. 6, 2021.

Even so, Pompeo, who was at the State Department that day, does not believe Trump’s involvement warranted attempts to oust him from office using the 25th Amendment. In fact, he denies there were any serious talks about that among Trump administration Cabinet officials, despite previous reporting that he discussed the matter with Treasury Secretary Steve Mnuchin.

“I never had a serious conversation about the 25th Amendment with anyone,” Pompeo said. “It did not happen.”

Had Pompeo thought it necessary to remove the former president from office, he said he “would have instigated the conversation.”

The threat of Russian aggression: “The stakes are high. I still think that the greatest threat to the country comes from the Chinese Communist Party and not from Vladimir Putin… The stakes are very real. The first take is that you will have this coalition between the giant Chinese Communist Party and Russia that presents a threat that is as great or maybe greater than the Soviet Union did to us when I back when I was a young soldier patrolling the then East German border. … It’s also the case that America is an enormous beneficiary from stability in the world, from European stability, from stability in the Middle East, from stability in Southeast Asia. We benefit from property rights and contracts and people of goodwill trading amongst and between each other and working on security together. That helps people in Iowa, New Hampshire, Kansas, all across America. And we sometimes take for granted what that instability means.”Whether he would support the bipartisan gun reform bill: “Support? Very unlikely. I think there’s going to be things in there that I think are inconsistent with a fundamental right that every American holds. And I just can’t support that kind of thing. There are lots of things one can do to keep everyone safe. Taking away their rights to own firearms doesn’t seem like one of them to me, and it looks to me like that’s what’s developing. Although I will concede the generic language itself. You could craft language out there that I suppose I’d say, sure, that does no harm to the Second Amendment. But it seems to me that as they advance this, the more the more I see, the less I think it makes any sense.”Abortion rights: “I believe deeply that Roe took away from the political process the capacity to have reasoned debate on what is a deeply held view for so many Americans time. I hold this view intensely. I believe in the right for every child to be born with all of my heart. I believe it because of science, and I believe it because of my faith. And Roe took away the capacity for us to make that case and to argue this out in the process that I think our founders would have preferred. And so, if Roe, in fact, is overturned in a week or so, I think that will return this to the states. There’ll be heated debate. I hope it’s within the lines of argument and reason. And then I hope every state will choose to protect the unborn every way they can.”States acting differently than one another: “There’s no doubt about that. I grew up in Southern California. My congressman was one Bob Dornan. You’ll remember Congressman Dornan, he nominated me to the United States Military Academy. That location is very different today. I’m not, that part doesn’t bother me. I’m very different politically. That part doesn’t bother me. The fact that we have states that make different choices, different priorities. You know, we talk blithely about the laboratory of democracy. The truth is, it just lets people make choices for themselves and it lets them govern at the lowest level. I wish we had a lot more decided at the state and local level than we do in Washington, D.C.. Sign me up for less uniformity on lots and lots of regulatory and tax stuff. I think America would be healthier for that.”

« What insurance travelers need — and which to skip