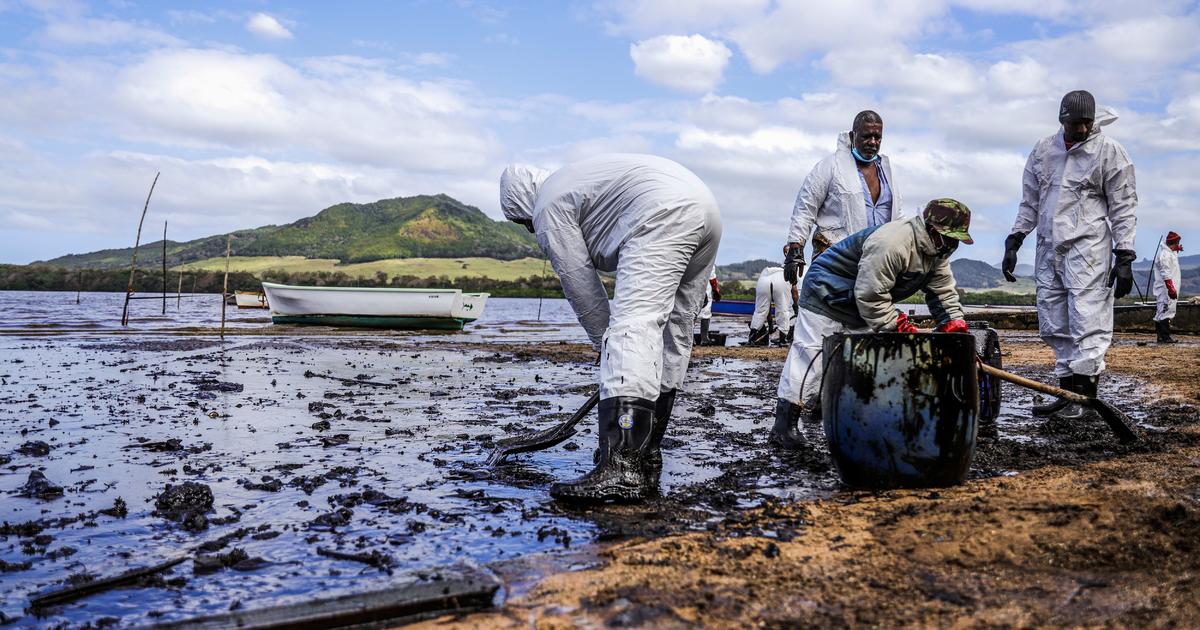 Mauritius says it will seek compensation for devastating oil spill

Johannesburg — Mauritius says it is seeking compensation from the owners of a Japanese ship that spilled oil after it grounded in the shallow waters off the Indian Ocean island nation, while urgent efforts continue to pump out the remaining fuel.

The MV Wakashio has spilled 1,000 tons of its cargo of 4,000 tons of oil into the sea, fouling the coastline of Mauritius, including a protected wetlands area. That threatens 35 years of work to restore the area, environmental activists said Wednesday.

An estimated 2,500 tons of fuel has been pumped from the ship, stranded on a coral reef at Pointe d’Esny, a sanctuary for rare wildlife. Workers are racing to empty the ship before it breaks up in heavy seas and further pollutes the shore.

The vessel MV Wakashio, belonging to a Japanese company but Panamanian-flagged, that ran aground and caused oil leakage is seen near Blue bay Marine Park in southeast Mauritius on August 11, 2020.

Prime Minister Pravind Jugnauth said Mauritius will seek compensation for the extensive environmental damage from the Wakashio’s owner, Nagashiki Shipping. He has declared the oil spill a national disaster.

The Reuters news agency reported Thursday that officials with Nagashiki had said the company “felt its responsibility acutely” and that it intended to take steps towards assessing compensation for the disaster, but there was no indication how long that assessment process could take.

Jugnauth’s government is under pressure to explain why it did not take immediate action to empty the ship when it ran aground on July 25. Two weeks later, after pounding by waves, the ship cracked and began leaking.

Some of the turquoise waters surrounding Mauritius were stained a muddy black, fouling mangrove wetlands and drenching waterbirds and reptiles with sticky oil.

People scoop leaked oil from the vessel MV Wakashio, belonging to a Japanese company but Panamanian-flagged, that ran aground and caused oil leakage near Blue bay Marine Park in southeast Mauritius, August 9, 2020.

Thousands of Mauritians have been working for days to reduce the damage by making improvised booms from fabric and stuffed with straw and sugar cane leaves to try to contain the oil’s spread. Others have scooped up oil from the shallow waters. It is estimated that nearly 400 tons that spilled have been removed from the sea.

France sent a naval ship, military aircraft and technical advisers from the nearby island of Reunion after Mauritius appealed for help last week. Japanese experts have arrived on the island and are assisting the effort. The United Nations is sending experts.

“It’s essential that the ship is emptied before it breaks up,” said Jean Hugue Gardenne of the Mauritian Wildlife Foundation. “Quite a lot of oil has been pumped out in the past few days, but we cannot let up. There is so much damage already.”

A dead starfish is seen following leaked oil from the bulk carrier ship MV Wakashio, which ran aground on a reef at the Riviere des Creoles, Mauritius, August 10, 2020.

The wildlife foundation is alarmed that the oil spill will ruin the work that it has done since 1985 to restore that area, Gardenne said.

“We have planted about 200,000 indigenous trees to restore the coastal forest,” he told The Associated Press. “We re-introduced endangered birds, including the pink pigeon, the olive white-eye and the critically endangered Mauritius fody to the Isle aux Aigrettes. Now all this is threatened as the oil is seeping into the soil and the coral reefs.”