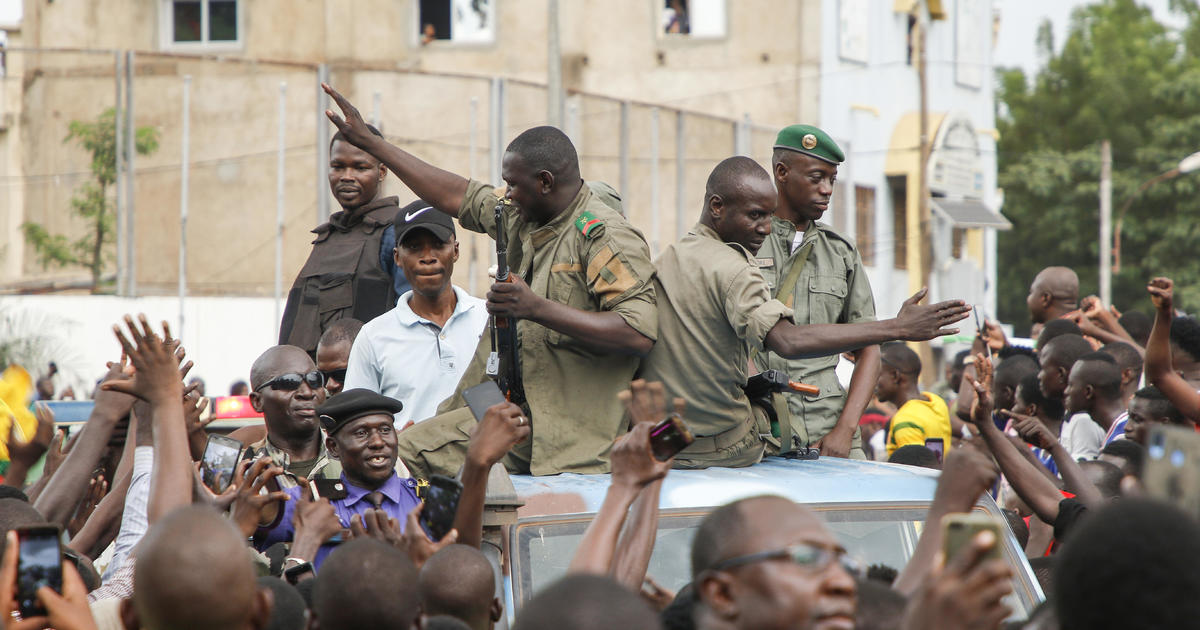 Crowds cheer as soldiers parade in vehicles along the Boulevard de l’Independance on August 18, 2020 in Bamako, Mali, after President Ibrahim Boubacar Keita and Prime Minister Boubou Cisse were taken captive in a coup.

Bamako, Mali — The Malian soldiers who forced President Ibrahim Boubacar Keita to resign in a coup promised early Wednesday to organize new elections after their takeover was swiftly condemned by the international community. In a statement carried overnight on state broadcaster ORTM, the mutinous soldiers who staged Tuesday’s military coup identified themselves as the National Committee for the Salvation of the People led by Colonel Major Ismael Wagué.

“With you, standing as one, we can restore this country to its former greatness,” Wagué said, announcing that borders were closed and that a curfew was going into effect from 9 p.m. to 5 a.m

The news of Keita’s departure was met with jubilation by anti-government demonstrators in the capital, Bamako, and alarm by former colonial ruler France and other allies and foreign nations.

The U.N. Security Council scheduled a closed meeting Wednesday afternoon to discuss the unfolding situation in Mali, where the U.N. has a 15,600-strong peacekeeping mission.

Keita, who was democratically elected in a 2013 landslide and re-elected five years later, still had three years left in his term. But his popularity had plummeted, and demonstrators began taking to the streets calling for his ouster in June.

West African regional bloc ECOWAS had sent mediators to try and negotiate a unity government but those talks fell apart when it became clear that the protesters would not accept less than Keita’s resignation.

On Tuesday, mutinous soldiers forced his hand by surrounding his residence and firing shots into the air. Keita and the prime minister were soon detained and hours later he appeared on state broadcaster ORTM. A banner across the bottom of the television screen referred to him as the “outgoing president.”

“I wish no blood to be shed to keep me in power,” Keita said. “I have decided to step down from office.”

He also announced that his government and the National Assembly would be dissolved, certain to further the country’s turmoil amid an eight-year Islamic insurgency and the growing coronavirus pandemic.

A general view of a building owned by the Malian Minister of Justice Kassim Tapo, that was burned and looted in Bamako, Mali, August 19, 2020, the morning after rebel troops seized Malian President Ibrahim Boubacar Keita and Prime Minister Boubou Cisse in a military coup.

Keita, who tried to meet protesters’ demands through a series of concessions, has enjoyed broad support from France and other Western allies. He also was believed to have widespread backing among high-ranking military officials, underscoring a divide between army leadership and unpredictable rank-and-file soldiers.

Tuesday marked a repeat of the events leading up to the 2012 coup, which unleashed years of chaos in Mali when the ensuing power vacuum allowed Islamic extremists to seize control of northern towns. Ultimately a French-led military operation ousted the jihadists, but they merely regrouped and expanded their reach during Keita’s presidency into central Mali.

Keita’s political downfall closely mirrors that of his predecessor: Amadou Toumani Toure was forced out of the presidency in 2012 after a series of punishing military defeats. That time, the attacks were carried out by ethnic Tuareg separatist rebels. This time, Mali’s military has sometimes seemed powerless to stop extremists linked to al Qaeda and ISIS.

Why Jill Biden is confident her husband will win the election »