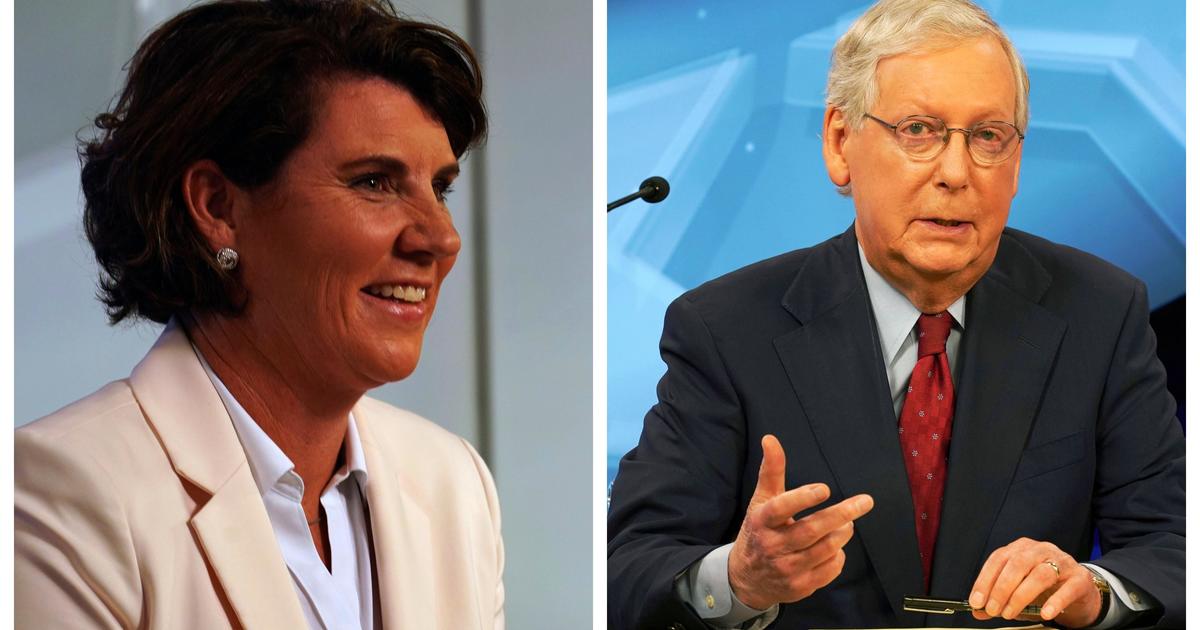 “Look I know how to make deals:” McConnell and McGrath face off

Kentucky Democratic Senate candidate Amy McGrath tried to slam Majority Leader Mitch McConnell for not being a leader as they both took shots at the other along partisan lines at their first and possibly only debate on Monday night. Early voting in the highly-watched race begins Tuesday.

McGrath accused McConnell of prioritizing the Supreme Court over the lives of Kentuckians who need stimulus relief funds as Congress has deadlocked on a deal, and McConnell tried to cast blame on House Speaker Nancy Pelosi.

“Look, I know how to make deals. I made three major deals with Joe Biden during the Obama era. What the problem is here is the unwillingness of the Speaker to make a deal,” McConnell said.

McGrath criticized McConnell for not being a leader and shepherding relief through Congress. She also faulted him for the partisanship seen in the Senate and made the pitch that a former Marine like herself is a leader who doesn’t offer up excuses when faced with significant challenges.

McGrath made a direct to camera appeal to viewers, saying, “Senator, you’ve been there for 36 years. How’s it looking Kentucky?”

In one of the most memorable exchanges of the night, McConnell took a swipe at McGrath’s personal history. “I think her entire campaign is: she’s a Marine, she’s a mom and I’ve been there too long,” he said.

The debate took place only hours after the Senate Judiciary Committee completed its first day of hearings on Supreme Court nominee Amy Coney Barrett. McGrath reminded viewers that the first case the Supreme Court takes up after the election is on the Affordable Care Act, which provides coverage to millions of Kentuckians.

“No one believes the Supreme Court is going to strike down the Affordable Care Act,” McConnell said.

McConnell accused McGrath of supporting adding more justices to the court, which has become a late campaign issue as Republicans have accused Democrats of deflecting on it. When asked by the moderator to clarify whether or not she supports adding more justices, McGrath said, “I think we should be working on unpacking the Senate right now.”

Monday’s debate also took place in the shadow of the coronavirus pandemic that has gripped not only the nation, but Republicans in Washington. Both candidates agreed the pandemic will not go away until there is a vaccine, and McGrath called for a robust contact and tracing plan.

Before the debate, McGrath, like Jaime Harrison, the Democrat in South Carolina, called for her opponent to take a COVID-19 test before the debate. When Senator Lindsey Graham last week refused Harrison’s similar request, that debate changed to a forum instead.

For this debate, McConnell has not said whether or not he has taken a COVID-19 test. The McGrath campaign played this up but did not back out of the debate. While the vice presidential debate took place last week as President Trump recovered from COVID-19, the Commission on Presidential Debates called off the debate scheduled for October 15.

McConnell focused his campaign pitch on how his position in the Senate as the only congressional leader not from New York or California has helped the lives of Kentuckians. He warned that if McGrath is in the Senate, she will have no clout and if Senator Chuck Schumer becomes the majority leader, he will give more power to New York.

McGrath entered the national spotlight in 2017 when she ran for the U.S. House against Republican Congressman Andy Barr. She raised an impressive amount of money for a House candidate but lost 51% to 48%. This cycle, her campaign has raised similarly impressive numbers but has faced a few bumps.

In the primary this year, McGrath faced a mounting challenge from Kentucky state Representative Charles Booker who entered the race late but galvanized support by showing up to racial justice protests with folks who wanted a more liberal candidate than McGrath.

In primary ads against her, Booker said Kentucky needed “a real Democrat” who would “not just help Trump get his way.” McGrath has tried to play to the center of the party since launching her Senate campaign. She said in an interview last summer during the week she launched that she would have supported the nomination of Judge Brett Kavanaugh to the Supreme Court but then walked back the statement later after “further reflection and understanding.”

A recent Quinnipiac poll found McConnell leading McGrath 53% to 41%, and the most important issues in the race according to voters there were the economy at 26%, followed by law and order at 20% and health care at 13%.

McConnell’s campaign in recent weeks has aired television ads calling McGrath an extremist liberal and pairing her image side by side with Pelosi and Senator Kamala Harris, the running mate of Democratic presidential nominee Joe Biden. Other Republican candidates in red states like Tommy Tuberville in Alabama and incumbent Steve Daines in Montana have used Biden instead of Harris to tie their challengers to the left.

McConnell is a favorite target of Democrats who encourage voters to look down ballot for change. In the Democratic presidential primary, candidates mentioned McConnell’s name frequently on the trail to illustrate that Democratic policies could not move forward if McConnell leads the Senate.

Read More: “Look I know how to make deals:” McConnell and McGrath face off