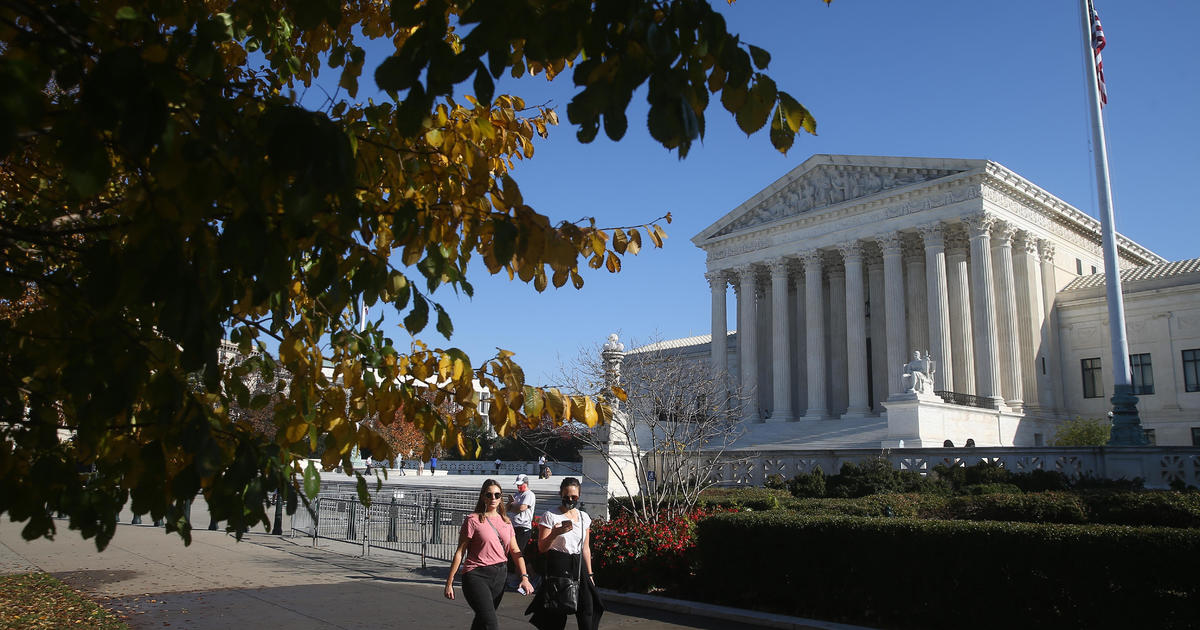 Listen Live: Fate of Obamacare back before Supreme Court

Washington — Days after the American people elected a new president and amid a pandemic that has claimed the lives of more than 237,000 people in the United States, the 2010 landmark health care law championed by Democrats and attacked by Republicans will be before the Supreme Court once again, this time facing a test before its new 6-3 conservative majority.

The justices are set to hear oral arguments in a dispute between groups of red states and blue states over the constitutionality of the Affordable Care Act’s individual mandate, with opponents of Obamacare, including the Trump administration, hoping the Supreme Court will deliver the fatal blow to the health care law they have long sought to dismantle.

The court will stream audio of the oral arguments in the case, known as Texas v. California, in real time on Tuesday, as it has done since the start of the pandemic.

How to listen to the Supreme Court’s arguments

What: The Supreme Court hears arguments in Texas v. California and California v. TexasDate: Tuesday, November 10, 2020Time: 10 a.m. ETOnline stream: Live in the player above or on your mobile or streaming device

The Supreme Court upheld Obamacare’s individual mandate, which requires Americans to buy health insurance, in a 2012 decision written by Chief Justice John Roberts. But the makeup of the high court has since changed, with the additions of Justices Neil Gorsuch, Brett Kavanaugh and Amy Coney Barrett, all appointed by President Trump.

Barrett’s confirmation to replace the late Justice Ruth Bader Ginsburg brought the most notable shift to the high court, as her appointment expanded its conservative majority from 5-4 to 6-3, leaving Democrats’ convinced Obamacare’s fate was effectively sealed.

While Barrett criticized the 2012 ruling from the Supreme Court in an essay published in 2017, she declined during her confirmation hearing last month to answer questions about the dispute before the justices this week and noted the legal questions raised in the challenge eight years ago differ from those at hand now.

Brought by a coalition of 18 red states and with the backing of the Trump administration, this case challenges the constitutionality of Obamacare’s individual mandate. The law originally imposed a financial penalty on Americans who failed to obtain health insurance, but Congress did away with the penalty when it approved its tax reform package in 2017. Now, the states argue the zeroing out of the fine renders the mandate unconstitutional, as the “change made it impossible to fairly interpret” the provision as a tax, as it was construed in the 2012 case.

The states argue the rest of Obamacare should topple if the mandate is struck down, as it is “inextricably intertwined” with the remainder of the law and cannot be severed from it.

Arguing to uphold Obamacare, meanwhile, is a group of 20 states and the District of Columbia, as well as the Democratic-led House of Representatives. Together, the defenders of the health care law argue Congress’s change to the law “modified the terms of the choice presented by [the mandate] — by allowing individuals to freely decide whether to buy health insurance without facing any tax assessment if they do not.”

“The effect of the amendment was to render [the provision] nugatory: it may encourage Americans to buy insurance, but it does not require anyone to do anything. Congress does not exceed its constitutional authority by creating such a provision,” the blue states, led by California, argued in a filing with the Supreme Court.

The blue states also warn of “prolonged uncertainty” about the future of Obamacare makes it more difficult for individuals, businesses and state and local governments to make decisions in reliance on the law, “threatening adverse consequences for American families, healthcare markets and the broader economy.”

The red states brought their challenge to Obamacare in February 2018, and a federal district judge in Texas struck down the full law as unconstitutional later that year. Then, in December 2019, a three-judge panel on the 5th U.S. Circuit Court of Appeals found the individual mandate unconstitutional, but sent the dispute back to the lower court to determine whether the rest of the law could stand without it.

While Democrats have sounded the alarm that the case could mean the end of Obamacare because of the Supreme Court’s conservative tilt, the high court in its last term declined to invalidate entire statues on two occasions, applying principles of severability to separate the provisions at issue from the rest of the law.

In one case involving robocalls to cell phones, the high court invalidated a government-debt exception allowing robocalls made to collect a debt owed to the government, but left the rest of the robocall restriction in place. In a second involving the structure of the Consumer Financial Protection Bureau, the court found a measure dictating the removal of the bureau’s director can be struck down without invalidating the entirety of the law that created the consumer agency.

Still, casting a shadow over the arguments is Mr. Trump’s 2015 pledge that his nominees to the Supreme Court would “do the right thing” and vote to kill Obamacare, unlike Roberts who joined with the liberal wing of the bench to uphold the law in the 2012 case.

Arguments over the future of the health care law are also set against the backdrop of the ongoing coronavirus pandemic, which has forced the Supreme Court to change the way it conducts its business. The justices are holding arguments remotely through telephone conference, as the court closed its doors to the public indefinitely in March due to the pandemic. Now, coronavirus infections are surging once again, as the number of confirmed cases surpassed 10 million and the death toll stands at a staggering 237,700.

The Urban Institute estimates that if the Supreme Court were to strike down the Affordable Care Act, it would lead to an additional 21.1 million uninsured in 2022 and 9.3 million people would lose income-based subsidies for insurance purchased on Obamacare’s exchanges.

A decision from the justices is expected by the end of June.