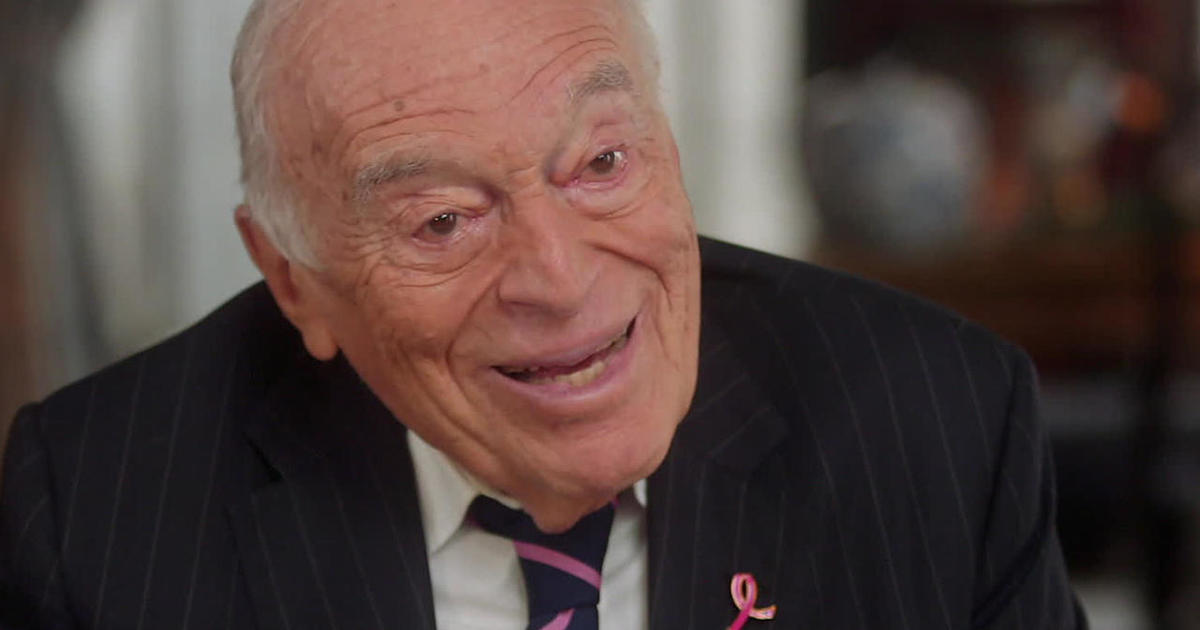 Many families keep their memories in photo albums. Leonard Lauder keeps his in a company archive. “For me, this is like Memory Lane,” said Lauder. “Everything that we’ve ever had and done, there’s a sample or two here.”

At 87, Lauder is chairman emeritus and former CEO of the Estée Lauder Companies, a $90 billion beauty empire. “I tell people that I’m a lipstick salesman,” Leonard laughed. “I love to sell things.”

Correspondent Alina Cho asked, “The shape of the lipstick that I use, you created that?”

“I did!” he replied. “Everyone had a standard bullet-shaped lipstick. So, I took a Gillette Blue blade, sliced it so that it would fit the woman’s lips.”

It all started 74 years ago with his iconic mother, Estée. “I remember sitting in my highchair in the kitchen, and I would see her mixing the creams on the stove,” Leonard said.

She sold her so-called “jars of hope” initially at beauty salons in New York, tempting women with free samples and a three-minute makeover.

“I’ve never seen anyone love to make women beautiful like her,” Leonard said. “It was in her blood.”

It became a family business. Her husband, Joseph, kept the books, and a young Leonard packed boxes of powder and cleansing oil. “We had a little tiny factory, and I would go there after school for 25 cents an hour and I’d work.”

Lauder enlisted in the Navy after college, and joined the company in 1958, sharing an office with mom. “I would listen to her on the phone, and did I learn,” he said.

He writes about life lessons in his new book, “The Company I Keep: My Life in Beauty” (Harper Business), equal parts biography, business, and tribute to his mother.

Lauder expanded overseas. He created Clinique, a risky move to take on rivals: “I said, the bigger we get, we’re gonna have competition. I said, ‘Why wait for someone else to do it?’ I did it myself.”

Estée lived a glamorous life. But as she aged, it hid her private struggle. Like her mother and sister, Estée was diagnosed with Alzheimer’s disease. She died in 2004, at age 97.

Correspondent Alina Cho with Leonard Lauder in the office of his mother, Estée Lauder.

Cho asked, “How hard was it, as a son, to watch your mother, who had been so vibrant, start to deteriorate like that?”

“It was very hard. But I remember being with her, and my wife Evelyn came into the room and said, ‘Estée, we miss you in the office.’ She looked at Evelyn and said, ‘I miss me, too.'”

Lauder has donated millions to fighting Alzheimer’s, just one of his many well-known causes. All of his proceeds from the book, Lauder said, will be donated to charity.

“I rarely simply give money to people and say, ‘You do it.’ I wanted to make our philanthropy transform something.”

The lifelong art collector made headlines for pledging a billion dollars’ worth of cubist works to New York’s Metropolitan Museum.

Lauder’s love of art helped him find love again. After his first wife, Evelyn, died in 2011, he connected with photographer Judy Glickman, a longtime family friend who had recently lost her husband, Al.

Judy laughed, “He proposes every morning.”

Cho asked, “Leonard, why is that important to you?”

“Because I want to reinforce, every day, my love for her,” he replied.

“It took me a little while to, ‘Ooh, is this real? What is happening?'” Judy said. “‘Oh my goodness, am I really going to be starting another whole life?'”

Cho said, “Some people might say, ‘You know, you didn’t have to get married again’?”

“I had to share my life with someone,” Leonard replied.

“This is a different stage of life,” Judy added. “Equally as exciting, and it’s challenging, but just in a very different way, and very special.”

In his special life, Leonard Lauder says he’s learned the ultimate lesson: it’s not all about success.

Cho asked, “If you had to boil it down and put a message in the bottle, what is the thing that you want to be remembered for?”

“He listened. That’s all,” Leonard replied. “And he was kind! Yeah.”

READ AN EXCERPT: The origin story of Estée Lauder, from “The Company I Keep”

“The Company I Keep: My Life in Beauty” by Leonard Lauder (Harper Business), in Hardcover, eBook and Audio formats, available via Amazon and IndieboundEstée Lauder CompaniesThe Lauder Family (elcompanies.com)

Leonard Lauder on Estée Lauder, as mother and icon »