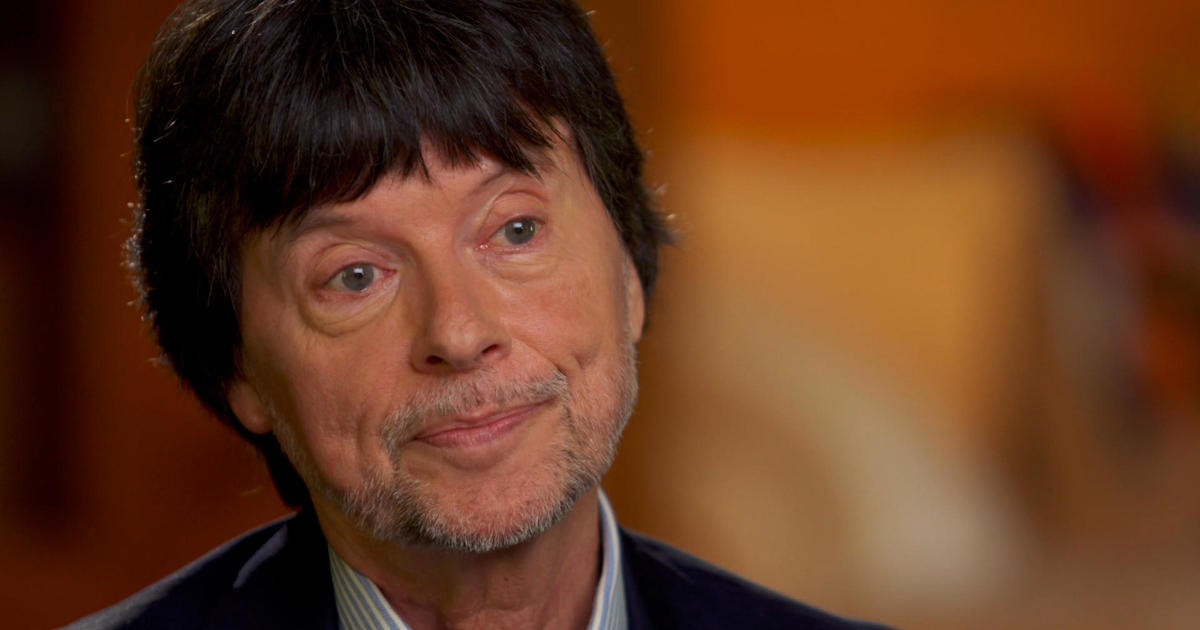 Ken Burns on America, selling his first film and more

With such an acrimonious election, we turn tonight to a man who tells the story of America in all her divisions and struggle for unity. Ken Burns’ documentaries range from “The Civil War” to “Baseball,” Vietnam, and last year’s, “Country Music.” Burns calls himself an emotional archeologist. He excavates lost love letters, forgotten photos and overlooked heroes. Research so deep, viewers can feel like strangers discovering America for the first time. His films ask what it means to be American. So, we asked, what does it mean to be Ken Burns?

Scott Pelley: In the “Country Music” film, Merle Haggard says, country music is “about those things we believe in but can’t see, like dreams and songs”–

Ken Burns: It’s telling us that there is in front of us a kind of rational world, in which one and one always equals two, but that the thing that compels us forward as human beings, is that we look for one and one equaling three. We find that in our faith. We find that in our art. We find that in our love of each other. And I think one of the things I discovered working on “Country Music” is that when I understood this dynamic between the U.S. and us, lowercase, uppercase, that I realized there’s only us, no them.

“Us,” the American struggle to forge union from diversity, has been Ken Burns’ obsession since he was 11 years old at the end of this lane in Ann Arbor, Michigan. In 1965, his mother was dying of cancer at the same time the fight for equality was in critical condition.

Ken Burns: Before my mom died, I would watch, and I would hear from the other room about the dogs and the fire hoses in Selma. And it would make me as upset, as upset in my gut, as the worry about my mom. And it was almost as if I was transposing the cancer that was killing my family, and the cancer that was killing my country. And if you look at my films, almost 40 of them, you can count on the fingers of one hand the number of films that don’t end up dealing with race.

His early films included “The Statue of Liberty” and “The Congress.” But it wasn’t until his seventh that America returned Ken Burns’ affection.

“The Civil War” was seen by 39 million viewers, an eleven-hour epic that immortalized a love letter and a waltz.

Scott Pelley: –that you can never get out of your head years later.

The lament seemed written as a score for the letter Union soldier Sullivan Ballou wrote his wife, a week before his death.

“The Civil War” episode 1: I shall always be with you in the brightest day, and the darkest night always, always, And when the soft breeze fans your cheek it shall be my breath, or the cool air your throbbing temple, it shall be my spirit passing by.

Ken Burns: I think every man wishes he could say those words to the woman he loves, and every woman wishes that her man could say that.

Burns’ films are a letter to the country he loves but not out of blind devotion. His is the affection that endures after confronting America’s founding flaw.

Ken Burns narration in “Thomas Jefferson”: We hold these truths to be self-evident, that all men are created equal, yet he owned more than 200 human beings and never sought fit to free them.

Burn’s finds the American paradox in the wars we fight and the games we play.

Ken Burns: And the first real progress in civil rights after the Civil War takes place when Jack Roosevelt Robinson, the grandson of a slave, makes his way to first base at Ebbets Field on April 15th, 1947. Then there’s no question that the story of baseball is just gonna take off from the assassination of Abraham Lincoln, and the failure of reconstruction and move, to that, to that moment.

Ken Burns’ moment came in 1981 with his first subject, the Brooklyn Bridge, which no one thought was a good idea.

Scott Pelley: Well, you had an inanimate object and no one to interview.

Ken Burns: Yes. And I look 12 years old. So, I was out tryin’ to raise money and they’d say, “This child is trying to sell me the Brooklyn Bridge. No!”

PBS bought “The Brooklyn Bridge” and Burns structured his style, animating images frozen in time and giving them voice.

Famous voices volunteer just to be in a Ken Burns film. Meryl Streep as Eleanor Roosevelt. Tom Hanks in “The War.”

His films have the pace of patient revelation. And time to think.

It’s the rhythm of a director who lives not in New York or Los Angeles, but on 50 acres of walpole, New Hampshire where even his apples have history.

Ken Burns: So these are cuttings that were taken from trees at Monticello.

Of course they are. We met Burns before the pandemic. At 67, he has four daughters from two marriages. But his longest relationship, four decades, is with PBS.

Ken Burns: I’m fortunate that PBS exists. I can go tomorrow to a premium channel or some place, a streaming service, and get $30 million to do Vietnam. But no one’s gonna say, “You can take 10 and a half years, Ken.”

He can take his time because he raises the money and runs his own company, Florentine Films. Producers, writers, historians, editors and photographers craft a half-dozen films at once so Burns can release about one a year even though a series like “Country Music” takes eight years to finish.

Ken Burns: One would think that making a film is an additive process. You’re building this. It’s not. It’s subtractive. The best metaphor I know of is we make maple syrup here in this town. And it takes 40 gallons of sap to make one gallon of maple syrup. And that’s what the process is.

Burns has boiled down the history of Mark Twain, the National Parks, plus, 18 hours on Vietnam and 19 hours of jazz.

Wynton Marsalis: Ken’s films touch something at the heart of our mythology, in who we have been at our best and at our worst, and who we want to be.

Composer Wynton Marsalis collaborated on “Jazz” and “Country Music.” Marsalis is artistic director of New York’s Jazz at Lincoln Center and something of an expert on improvising with Ken Burns.

Wynton Marsalis: He’ll be vibrating, and that’ll be in the fourth year of something, and it’ll be 1:00 in the morning after you’ve worked since 9:00 in the morning. So now it’s 1:00, so– and he’s till like, “No, no, right here. We need to– right here, we need to,” and to see like a person with that type of energy and just on fire like that– as he’s grown old it’s got worse.

Scott Pelley: Ken told us that you ‘see’ him. So, what do you see?

Wynton Marsalis: You know, for me, I always see like a kid. If you can retain that childish awe and wonderment and believe that you can change things, if you can maintain that, and that’s what I see in him.

Childish awe and wonderment that somehow survived his childhood.

Scott Pelley: Would you say you had a happy childhood?

Ken Burns: I don’t think I had a childhood. I mean, I did, and I had happy moments. But my mother got cancer very early on. And that was the shadow cast across my brother and my childhood. We also had a father who was not mentally healthy. He was a functioning person, but he was an unhappy man, and–

Burns was 39 when he realized he was trapped behind the wall he built to shield himself from his mother’s death. The revelation came from his father-in-law.

Ken Burns: And he said, “I bet you blew out your candles as a child, as a boy, wishing she’d come back?” And I said, “Yeah, how’d you know?” And he goes, “Look what you do for a living, you wake the dead. You make Abraham Lincoln and Jackie Robinson come alive. Who do you think you really want to wake up?” So, I called my brother, and we wept, and we said we have to find mommy.

They had to find her because she’d been buried in an unmarked pauper’s grave with 28 souls simply because Burns’ father never retrieved her ashes from the funeral home.

Like researching a story, Ken and his filmmaker brother, Ric, tracked their history to the mass grave where they placed a memorial to Lyla Burns.

Ken Burns: The ability to say to the world, ‘this is us,’ wouldn’t have been possible without the crucible of her sickness, her death. And even that long wilderness of not dealing with it and dealing with it I think has made me a better filmmaker.

A filmmaker working through the chapters of a single subject because Burns found, as Walt Whitman wrote, “These states are the amplest poem.”

Ken Burns: I’m working on seven films right now. I mean, we got Ernest Hemingway, we have Muhammad Ali, we have Benjamin Franklin, we have LBJ biographies. We’re doing a history of the American Revolution and a biography of the buffalo.

They are, together, the story of a people straining for union, a theme Ken Burns has explored from his very first film which was, after all, about a bridge connecting America to America.

Ken Burns: This is what stories do. They do liberate us from the tyrannies of our limitations, and our past, and our foibles. And so this is what we human beings do to negotiate this all too short passage that we call life. And I’m so grateful that I live in the United States of America, I mean that. I mean that. And that I get to tell stories about us, the U.S.