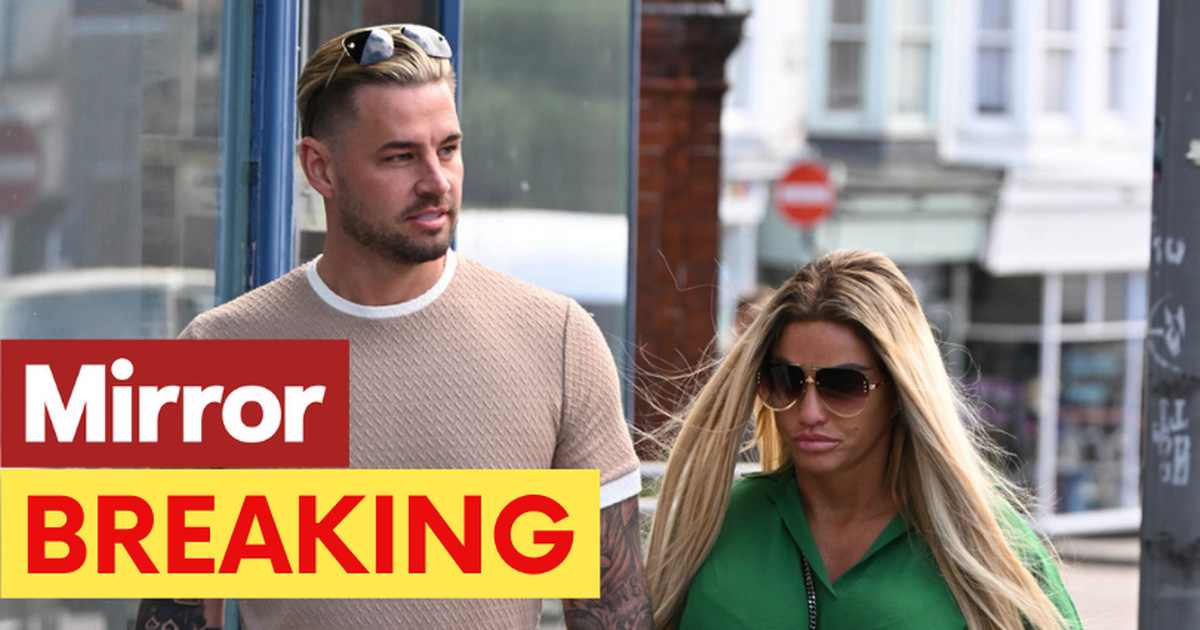 Katie Price, 44, smiled as she left the dock after avoiding a jail sentence for breaching a restraining order when she called her ex-husband Kieran Hayler’s fiancée Michelle Penticost when she sent a message calling her a ‘gutter s***’in a foul-mouthed message Katie Price, 44, smiled in court on Friday, after avoiding a prison sentence for her restraining order breach.

The star has been handed an 18-month community order at Lewes Crown Court to carry out 170 hours of unpaid work after admitting breaching a restraining order by sending abusive messages to her ex-husband Kieran Hayler about his fiancée Michelle Penticost.

Katie branded Michelle a “c***ing whore” and a “gutter s**g” in the text messages sent to her ex-husband in January this year.

When delivering his verdict on Friday, Judge Stephen Mooney told the star how in his judgement the offence was “committed out of anger” and the breach could not be “considered minor”.

“In my judgement, balancing the aggravating and mitigating factors, the appropriate sentence is a medium-level community order,” he added when letting the star know her fate in the courtroom.

Katie showed no emotion as the verdict was delivered but gave a brief smile as she left the dock.

As she arrived at court ahead of hearing the verdict this morning, the mum-of-five was heard to say “suck my d**k” as she made her way past reporters, one of whom asked her about the chance she could go to prison.

The mum-of-five attended Lewes Crown Court today for the sentencing hearing, wearing a striking green tracksuit and oversized fluffy bag, with fiance Carl Woods supporting her and holding her hand as they walked into the court together.

The former Love Island contestant, 33, sat in the public gallery as Katie looked straight ahead as the details of her offence were read out at the start of the sentencing.

Katie was supported by her fiance Carl in court on Friday

The court then heard the text message Katie sent ex-husband Kieran that was in breach of the restraining order in place against her.

Katie’s former husband Kieran was also present in the courtroom and seen ‘looking down’ at one point on Friday.

It was then heard how the star has lived her life in the public eye since the age of 17, and voluntarily sought treatment at The Priory on two occasions in the past.

The star attended her sister’s wedding earlier this week, after reportedly asking her to bring the date forward

“One has good days and bad days. There’s no escape. There’s always something there attempting to put a spin on it,” Katie’s defence said prior to the sentence being revealed, Sussex Live reports.

Katie’s defence counsel said “there was a considerable problem in her life” at the time of the offence, in relation to access to her children. However, she is having therapy, which is “working”, and she is not acting impulsively.

The star’s defence counsel added that she has shown “clear signs of remorse” and that the messages, relating to Michelle, were aimed directly at her ex-partner, Kieran.

Katie wore an all-green ensemble to appear in court on Friday, complete with a big fluffy bag

The star has a depressive disorder, according to her doctor, is “learning to cope with her issues”.

Nicholas Hamblin, representing Katie Price, said his client had pleaded guilty to the breach but she had been under a “misunderstanding” that the restraining order “worked both ways”.

He said there was an element of “provocation” and she had been “over-reacting as she felt she was being criticised”.

The star’s lawyer added that Katie had sought help for her emotional problems at the Priory Clinic.

Carl watched on as the verdict was delivered

He said she suffered from a “depressive disorder and anxiety”, and added: “Miss Price is learning to cope with her emotional problems and to not react in the way she has in this case.”

“It’s perhaps a case of building someone up only to knock them down.”

He added that “there was a lot of good to be said” for Katie and she was considered in a probation report to be at “low risk of reoffending”.

He added: “She has shown signs of remorse, she accepts an indirect breach.”

Mr Hamblin continued to tell the court how Katie’s guilty plea is an apology – more specifically, “an apology to Ms Penticost”.

In a victim impact statement read to the court, Michelle said the impact of the restraining order breach by Katie Price had a “devastating effect” on her mental wellbeing.

She said: “The impact of what Katie has done is very upsetting, I feel threatened and intimidated.

Michelle admitted to feeling ‘very vulnerable’ in the statement

Delivering his verdict on Friday, Judge Stephen Mooney told the star “In my judgement, this offence was committed out of anger.

“The words you used were highly offensive and inflammatory so the breach cannot be considered minor.

“In my judgement, balancing the aggravating and mitigating factors, the appropriate sentence is a medium-level community order.”

Crawley Magistrates’ Court heard back in April, Katie sent her ex Kieran, 35, a foul mouthed text in which she called his fiancée a “c***ing wh*** piece of s***” and a “gutter s**g”.

Katie committed the offence while on a suspended 12 month sentence, after previously admitting to drink-driving while disqualified and without insurance last year.

Katie spent the night before the hearing at one of her make-up masterclasses, where she was pictured dabbing away tears in her eyes and being comforted by friend Aisleyne-Horgan Wallace, who hosted the event.

On Wednesday Katie was seen celebrating her younger sister Sophie Price’s wedding, with the family day reportedly brought forward two days over fears she could be sentenced to prison.

Her partner Carl Woods was absent from the event, after reports he was ‘banned’ by bride Sophie.

The pair divorced in 2021 after eight years of marriage.

In April, Crawley Magistrates’ Court heard Katie sent Kieran a expletive laden message on January 21, saying: “Tell your c***ing wh*** piece of s*** girlfriend not to start on me – she has a restraining order so shouldn’t try to antagonise as she is in breach.

“I am sure she doesn’t want people knowing she was having an affair with you behind my back the gutter s**g.”

Katie and Kieran split in March 2018, with their divorce finalised last year

Katie had been handed a five-year restraining order forbidding her from contacting Michelle indirectly or directly in 2019, after she used abusive language towards the mother-of-two at the school gates.

She was, at the time, convicted of using threatening and abusive words or behaviour likely to cause harassment, alarm or distress.

Katie denied breaching the restraining order, but the next month she pleaded guilty at Lewes Crown Court.

The star’s lawyer Nicholas Hamblin said the star should avoid jail because only the words “tell your” were a breach of the restraining order.

But Judge Stephen Mooney warned her she was “at risk of going to prison” as she committed the offence while on a suspended sentence.

In December 2021, the TV personality was given 100 hours of unpaid community work and a 16-week prison sentence, suspended for 12 months, after she admitted drink-driving while disqualified and without insurance after a crash near her home in September the same year

She checked herself into the Priory for rehab and completed her community service at Horsham Matters, a Christian charity providing services for people in need.

In total, she has been banned from driving six times.