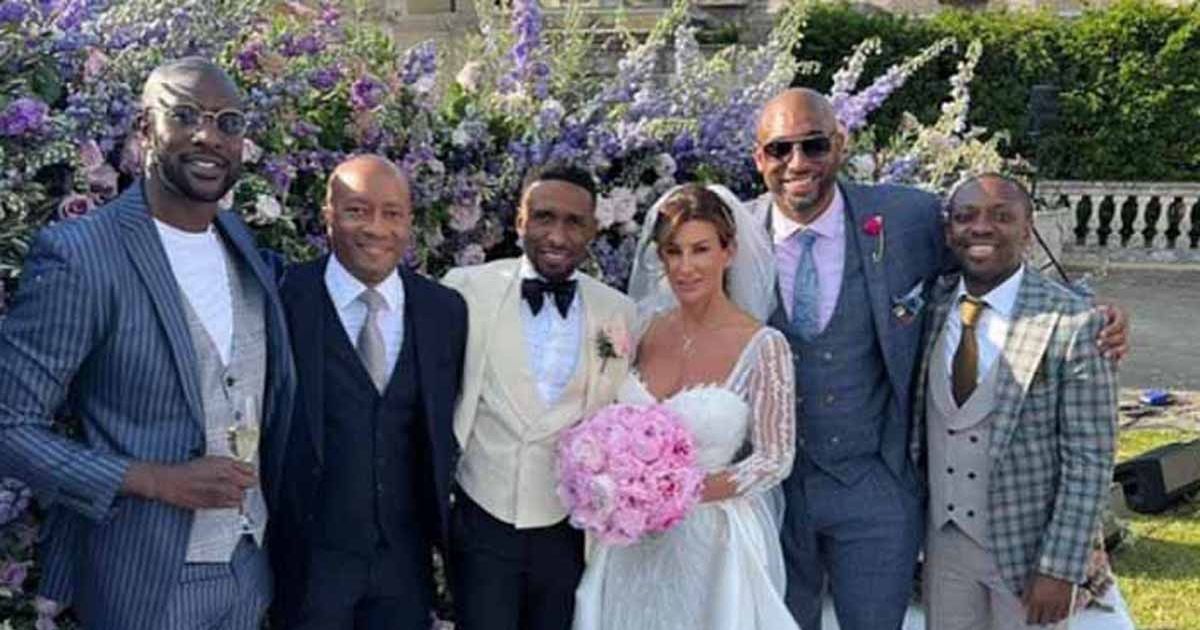 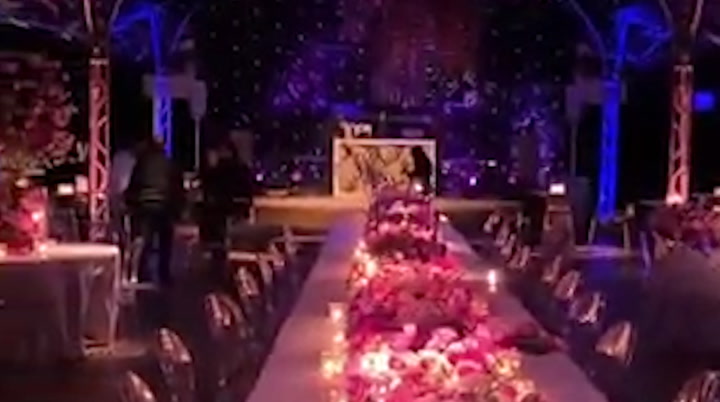 Jermain Defoe married his fiancé Donna Tierney in a lavish wedding ceremony earlier this month, with the couple having enjoyed a three-day celebration of their union.

The former footballer, 39, wed the beauty therapist at picturesque country house Cliveden House in Berkshire, surrounded by 360 guests including the bride’s daughter.

The groom – who has played for the England national team during his career – and the bride have opened up about their wedding, describing it as having been “like a movie”.

The newlyweds – who have known each other for several years, but only began dating in around 2019 – shared details of their nuptials with OK! following their special ceremony.

Details of their glamorous nuptials have been shared by the couple in OK! magazine this week, with Jermain opening up to the outlet about getting emotional seeing his bride walking down the aisle towards him.

with the bride wearing a bespoke lace-sleeved regal gown that had been eight-months in the making.

He said: “When I turned around and saw her from a distance, my eyes just started welling up. I tried to compose myself, but I’m an emotional person anyway.”

Jermain recalled that as she approached him at the end of the aisle, it felt like a “special” moment. He said: “She held my hand and she was shaking. I remember saying to her, ‘Just relax’.”

“As soon as I locked eyes with Jermain I just felt the calmness,” said Donna, who has changed her surname to Defoe. “It was so special. It felt like a fairy tale.”

Jermain said the wedding was emotional and ‘special’

The couple enjoyed a three-day celebration of their nuptials at the 376-acre property, which began with a barbecue for 150 friends and family. It was the first time their families had met.

Jermain and his groomsmen stayed in a cottage near to a lake on the estate prior to the wedding, with Donna having spent the night in the main hotel with her attendants.

Donna and her attendants are understood to have worn bespokes dresses by Anna Cirignaco of Eleganza Sposa in Glasgow. “It was the very first shop I went to,” she said.

“They said I didn’t even have to try a dress on and their designer would make it for me. I wanted something regal, something elegant that shows off my shape. And something with long sleeves, because Jermain likes long sleeves,” she added.

Donna’s daughter Olivia, 12, was her maid of honour, along with her sister Charlene. Jermain’s best men were his cousin, Stefan, and friend Ryan.

The couple got engaged last year

Jermain opted for a three-piece suit with an off-white tuxedo and waistcoat, by Mo Adass at Signature Bespoke. He walked by the side of his mum, Sandra, to meet his bride.

Donna was accompanied down the aisle by her father, Charlie, with her grandfather’s favourite song – What A Wonderful World by Louis Armstrong – playing as she arrived.

The couple exchanged ‘traditional vows’ and custom-made rings, with his made of white gold and platinum with two diamonds, whilst her wedding band was emerald-cut.

Jermain’s wedding band haven’t not fit over his knuckles when trying it out shortly before the wedding. Fortunately, it fit “perfectly” for their nuptials.

After the nuptials, the newlyweds kissed, with Jermain teasing that guests were laughing because it “went on longer than at a normal weddings.” Donna added that it was “special.”

The couple then walked off hand-in-hand as a gospel choir performed Oh Happy Day.

“This is my future, this is forever, this is the person I want to spend the rest of my life with,” Jermain said of his wife.

Guests were serenaded by bagpipes at the reception, in honour of Donna’s Scottish roots, and were later entertained by a steel band in a nod to Jermain’s Caribbean heritage.

The reception was held inside a glass orangery marquee, which included delphinum chandeliers, with a six-tier wedding cake arranged for the couple’s three-day celebration.

The newlyweds’ first dance was to Luther Vandross’ Always And Forever. “It was just a little two-step. We danced until halfway through [then] I asked everyone to join us,” Jermain said.

His speech during the celebrations is said to have brought tears to guests’ eyes, with Jermain saying: “I didn’t even write anything down because when you know how you feel it comes from the heart.”

Donna said: “The bit that got me was when he spoke about my daughter […] That made me feel extra-special. My daughter loves Jermain so much, he’s such a good stepdad.”

There was also a special mention of Jermain’s stepfather, Andre, who came into his life when he was seven. He’s credited as having been a role model for the groom.

Guests were treated to a colourful display of fire-eaters and flamethrowers at the after-party, with a Caribbean buffet available at midnight and the marquee became a nightclub.

Jermain said the music stopped at 4am but guests headed to the lobby of the main building, with “nobody want[ing] to go home,” though the couple retired to bed themselves.

After just a couple of hours sleep, Jermain and Donna were up to host tea for their guests before closing their three-day celebration.

Jermain and Donna describe their big day as “like a movie”.

The couple met years ago when he played for Sunderland, with them reconnecting on social media in 2019 when Jermain joined Rangers – as he remembered she was from Glasgow.

Jermain proposed at Glasgow’s Blythswood Square Hotel last August, hiring out the penthouse and covering it with heart-shaped balloons, the words ‘Marry Me’ in lights and rose petals.

The couple had a romantic honeymoon in the Maldives.