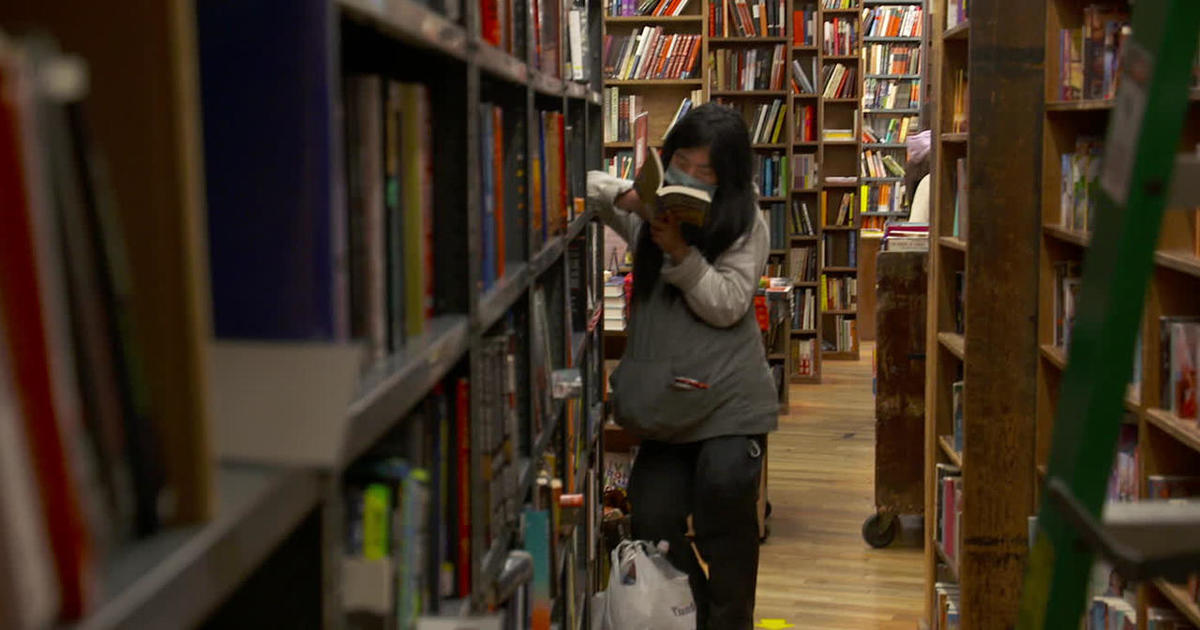 At New York City’s Strand Book Store, the most expensive book they have for sale is a 1935 edition of James Joyce’s “Ulysses,” signed by both the author, and the illustrator, Henri Matisse. It can you yours for $45,000.

New Yorker Contributor Kelefa Sanneh asked, “Do you have a layaway plan?”

Nancy Bass Wyden, a third-generation owner of the Strand Book Store in New York City, pulls some precious editions from the store’s safe for Kelefa Sanneh.

The precious copy is nearly as old at the bookstore itself. At 93 years old, the Strand is a New York institution: four floors of books, chosen by staff members who passed a literary test before being hired. But it’s also a family tradition.

“My grandpa was a real book man, as was my dad. But my dad had a very good business sense,” said Nancy Bass Wyden, a third-generation owner of the store in Greenwich Village.

But the book trade has never been easy.

Sanneh asked, “How cutthroat was it back then?”

“Well, there was one store called The Cheapest Bookstore in the World,” Wyden laughed.

Still, the Strand endured, through the Great Depression, World War II, 9/11, even Amazon. Wyden said, “But this COVID has really knocked our socks off.”

That’s true for stores all over the country. But for some independent book sellers, there’s a secret weapon: a community of readers that wants them to survive.

In St. Louis, Mo., Jeffrey and Pamela Blair created EyeSeeMe, an African-American children’s bookstore, five years ago. “We opened it up based upon our experience of raising these girls here,” Jeffrey said. “Representation matters. And having my children see themselves in the books that they read, really helped them become self-motivated by learning, and they did extremely well through school, and then we continue to see those benefits.”

The shop opened amid protests over the police shooting of a local 18-year-old Michael Brown. Suddenly, everyone wanted what EyeSeeMe was selling. “People that were not African-American, they want to expose themselves and their children to know more about African-Americans, African-American culture,” said Blair. “All children need to see more representation in books of other people to dispel, like, a lot of stereotypes and things like that.”

But in April, after the pandemic began, the store began to struggle. In an effort to hold, Blair started a GoFundMe campaign. He said, “We just let people know honestly what was going on with us.”

Sanneh asked, “Was that a moment when you had to kind of swallow some pride?”

“A hundred percent,” Blair replied. “We felt like it was our last resort. But even before we pressed the button, it was, like, ‘Ah, I don’t really wanna do this.'”

The Blairs reached their goal of $25,000 within a week. “The community really showed up for us.”

Two weeks ago, the Strand posted a plea for help – and the whole world responded.

“There’re so many institutions that are closing or closed,” said customer Andrew Chin, “and this is one place that I cannot imagine New York without.”

By then, Wyden had already furloughed most of the Strand’s 216 employees. Despite owning the building, and got a loan from the government’s CARES Act, by this fall the losses were mounting.

“Asking a business to sustain eight months of sales at a 30% level is … you can’t,” said Wyden. “It’s a marathon.”

Now, they have 79 people on the job. “And we are quickly rehiring,” she said.

Rehiring can’t come soon enough for shipping clerks, like Uzidema, who faces a crush of orders each day, from as far as Switzerland: “The more it piles up, that’s more jobs, you know? That’s more of our friends, more of our coworkers, who come back. So, I mean, everybody’s happy.”

Mail orders for the Strand skyrocketed after the bookstore discussed its financial dire straits on social media.

The store is counting on more than books to keep customers interested, including magnets, face masks, and totes, all designed to appeal to holiday shoppers

Wyden said the holiday bump is very important to her store: “It’s essential for us, and all independent bookstores.”

And both Wyden and EyeSeeMe’s Jeffrey Blair hope their season of good tidings continues, and spreads.

Sanneh asked, “What do you know about running a bookstore now that you didn’t know a year ago?”

“How wonderful the Strand community is,” Wyden replied. “And I just treasure them even more than ever.”

The line to get into the Strand.

Steve Martin and Harry Bliss on the concise joy of cartoons »