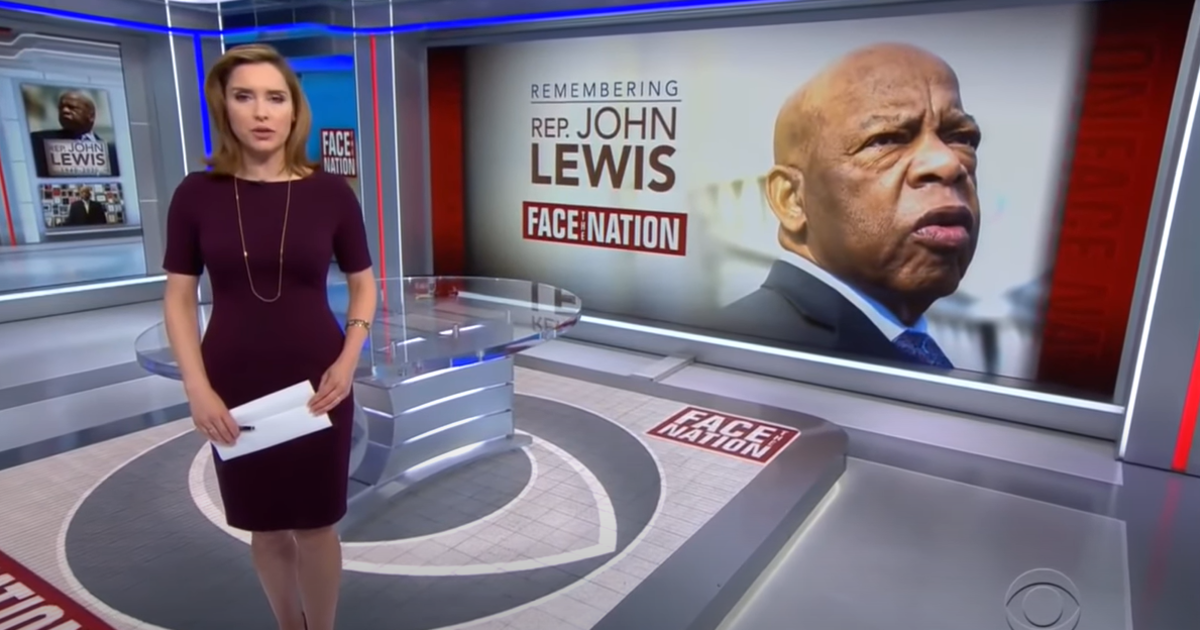 ICYMI: Top takeaways from this week’s “Face the Nation”

This week on “Face the Nation”, in the midst of dealing with the cruelty of the coronavirus, America mourns the loss of a legend. What’s the path forward for the civil rights movement following the death of Georgia Representative John Lewis?

1. Colin Powell on racial progress to be done in the wake of Lewis’ death

Colin Powell: John Lewis was both “tough as n…

Former Secretary of State Colin Powell made history as the first Black Chairman of the Joint Chiefs of Staff. The retired General reflected on progress on racial justice in America following the death of Congress John Lewis. He also noted that he is dedicating his own work in retirement to issues around the “education of young people and helping out my fellow citizens who are on the lower economic scale.” He also called for broader structural change. “We have to fix the economic system so that every American can have a quality, not only education, but quality opportunity to have a good life and to make the money necessary to have that kind of good life.”Symbols are also important: Powell voiced support for the current Chiarman of the Joint Chiefs gen Mark Milley who pointed out this week that 20% of the U.S. Army is black, and some of those soldiers serve this country on bases named after Confederate generals who fought to defend the enslavement of their ancestors. What Powell said: “I would rename the bases. We really hadn’t thought about it a few years ago. But now with Black Lives Matter and all the issues that are before us, I think it is a good idea to rename the 10 bases in the United States Army that are named after Confederates. You know, I never really thought about it. I went to Fort Benning, Georgia, named after a Confederate, and I did all my training there, but it never really stuck to me that this name should be changed. So I fully support what General Milley is doing. I hope he doesn’t get any difficulty with it with the rest of the administration. But I think this is something we should do and we should do it as quickly as we can” On the Confederate flag: Powell said the Pentagon was right to ban the Confederate flag by keeping it off a list of officially approved flags. This compromise step rather than an explicit ban was the way that Defense Secretary was able to sidestep President Trump’s opposition. The President again said on Sunday that he views the flag as a matter of free speech. Powell was clear about how he views the flag. “The Confederate flag is now an explicit demonstration of another time, another place, another country that had nothing to do with the United States of America. It was the Confederate States of America. They were not part of us and this is not the time to keep demonstrating who they were and what they were back then. This is time to move on. Let’s get going. We have one flag and only one flag only. And that’s the flag we should all support and all display and all be proud of.

Atlanta Mayor Keisha Lance Bottoms suggested Sunday that Georgia Governor Brian Kemp’s decision to bring a lawsuit challenging her order to wear masks was motivated by politics but also may have been influenced by the “demographic” of the majority-black city of Atlanta or perhaps her own gender. She pointed out that other cities in Georgia “led by men” had similar ordinances and yet they were not challenged. The lawsuit this week further muddies politics with health policy and mask wearing. Enforcing a mask wearing mandate has become a flashpoint particularly in southern states where COVID-19 is flaring. CBS asked Atlanta police if there had been any arrests or ticketing of those refusing to obey the order. The Police Department told us they had no such data. What Bottoms said: “Our police officers certainly can enforce this ordinance, but at the end of the day, the party that- that speaks of local control has taken away local control in attempting to silence our voices in this state. Why it matters: The CDC advises mask wearing as the best way to stop the spread of the virus. The Governor also advises it but said it cannot be enforced. Kemp’s public messaging echoes President’ Trump’s message that he wants people to have the “freedom” of making their own decision. However, a White House document revealed this week that health officials advise that masks be mandated in 19 states considered to be red zones because of the outbreaks. The CDC Director himself said this week that wearing a mask could help them gain control over the virus within a matter of 4-8 weeks.

3. Dr. Scott Gotttlieb on American’s refusal to “mask up”

Gottlieb: Kids could come down with COVID-lin…

Former FDA Commissioner Dr. Scott Gottlieb pointed to the refusal of some Americans to wear a mask as a real challenge for public health officials who are trying to help Americans gain control over a spreading virus. He predicted that the center of the current epidemic is in California, Texas, Arizona and Florida could hit an apex within 2-3 weeks. He said now other epicenters of spread are starting to emerge including Georgia, Tennessee, Missouri and Kentucky. What Gottlieb said: “I think it might be wishful thinking that everyone is going to wear a mask. There’s a hardened percentage of the population that just feel that the masks are some infringement on their liberty. We’ve been unable to find some kind of acceptable medium in this country between hapless spread and strict lockdowns. If we can come to a consensus about some reasonable measures that we all agree to take, we could potentially get this under control and keep it under control. Masks are an important first step, but I just don’t see enough of the population agreeing to wear masks. If 30 percent of the population won’t wear masks any time, and then you only have maybe 75 percent compliance among the other portion of the population because nobody is going to do everything all the time, that might not be enough mask-wearing to really get this fully under control.” “I think the apex in the epidemic states right now, the center of the epidemic, which is California, Texas, Arizona and Florida, could be two to three weeks away. There you are seeing some slowing in the new cases. It’s not clear whether or not the new cases are actually slowing or these states are just hitting the upper limit of their testing capacity. Arizona certainly seems to be hitting the upper limit of its testing capacity. The challenge, though, is that as these states start to peak, and I think they’re going to have an extended plateau. I don’t think this is a sharp up and a sharp down. But as they start to peak, we’re seeing other epicenters of epidemic spreads start to emerge. So you have to be very worried right now about Georgia, about Tennessee, about Missouri, about Kentucky. We’re seeing record numbers of cases, rising hospitalizations and really a shifting of the center of the epidemic potentially in the United States. And this just portends more trouble for the fall and the winter that we’re going to be taking a lot of infection into the fall.”Why it matters: While the science behind the benefits of “masking up” is indisputable, the nation still sees protecting oneself and others from the ongoing pandemic as a deeply political issue.

Dr. Richard Besser is a pediatrician and the former Acting Director of the CDC. He is concerned that that children of color , particularly those in low income communities. are going to be disproportionately impacted by the virus as schools reopen. What Besser said: “The death rate for blacks, Latinos, Native Americans far surpasses their proportion of the population. And if you look at how we fund schools in America, most of it’s done off property taxes. So wealthy communities are going to be able to make the- the adjustments to their schools that are necessary for them to be safe places for children, for teachers and staff. That’s very expensive. It takes looking at your airflow. It looks- making sure that you have enough classrooms so that you don’t need as many children in each class and they can socially distance. It means hiring staff who can decontaminate classrooms and disinfect them every night and staff to screen staff and children every morning. And in low income communities, schools have been under invested in ffor generations without additional resources. We will see children of color, black and brown children, disproportionately affected as schools start to reopen.” Why it matters: Senate leaders are talking to the White House about what types of emergency relief will be provided to schools to help prepare them for COVID-19. President Trump has said he wants to cut federal funding to school districts if they do not restart in person classes. Public schools are primarily reliant on local income taxes which is a disadvantage to those in low income districts. Those schools may need more federal help. Despite Trump’s public objections, Republican leaders have expressed a willingness to provide not reduce funding. Congress reconvenes this week and the arguments begin.

Incoming University of California school system President Dr Michael Drake noted that COVID-19 is making it more challenging for students to prepare and study for tests like standardized SATs and ACTs. That school system had previously decided to end the requirement for them in an attempt to increase diversity of students. He pointed out that the pandemic has also made it “uneven” among students who have different access to workspaces, etc.What Drake said: “And what we found is that standardized tests provide marginal information. They can help, but they don’t tell the whole picture. And particularly in this time of COVID, when the- the opportunity to study and prepare for a test is quite uneven between those students who might be applying for us, we wanted to remove any potential barriers for students who might not have access to all the support that they need during this time to prepare for taking the test and therefore artificially score lower than they might. So the plan is to retreat from those standardized tests now and to think about other ways that we might gather that information as we look forward in the future. It’s an ongoing discussion for us.”Why it matters: With students attempting to return to school this fall, campus administrators must do their part to eliminate any barriers, particularly during the ongoing pandemic, that could further keep students from getting their education.