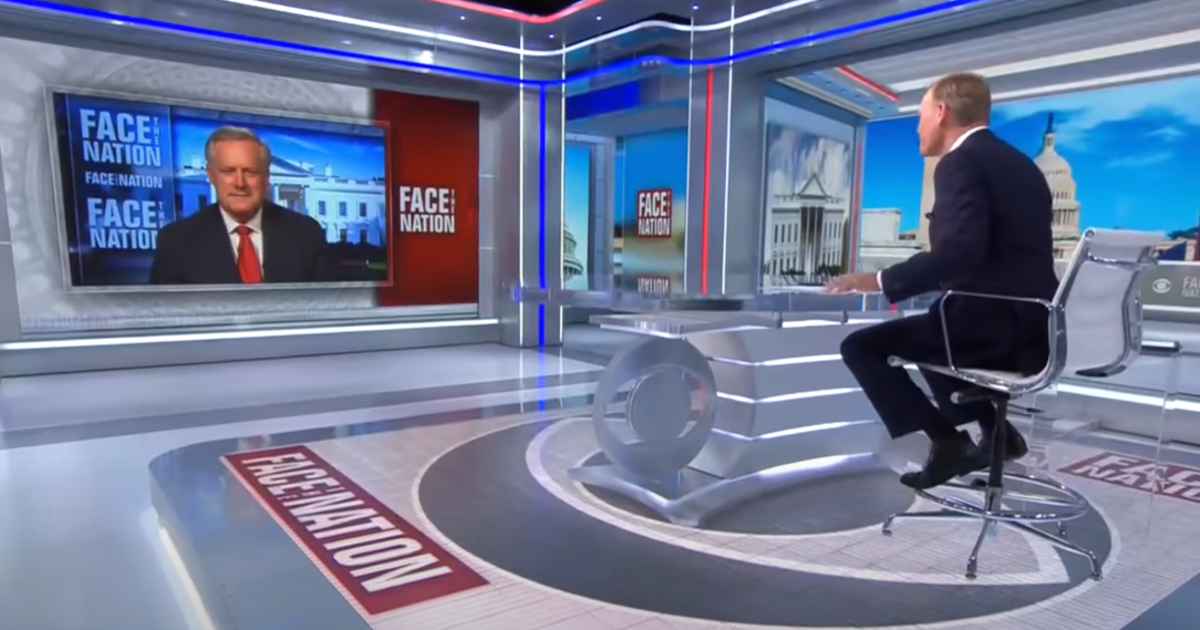 ICYMI: Top takeaways from this week’s “Face the Nation”

This week on “Face the Nation”, Coronavirus deaths and infections continue to rise in the U.S. as July marks the worst month for new cases since the beginning of the pandemic.

With the Trump administration and congressional Democrats still at an impasse over the next coronavirus relief package, White House chief of staff Mark Meadows warned Sunday he is “not optimistic” a deal will be reached in the near future. What Meadows said: “I’m not optimistic that there will be a solution in the very near term. And- and that’s why I think the effort that Senator Martha McSally led on the Senate floor to extend the enhanced unemployment was the right move. And yet Senator Schumer and his Democratic colleagues blocked that.” Why it matters: While Meadows said the lengthy meeting Saturday was a “step in the right direction,” the disagreements between the White House and congressional Democrats indicate a deal remains out of reach. A major sticking point between the two sides is the extension of enhanced unemployment benefits, which expired last week and has left 30 million Americans facing an uncertain financial future.

2. Clyburn blames GOP for “jerking people around” with extension of unemployment aid

Rep. Jim Clyburn of South Carolina derided Republicans and the White House for suggesting a short-term extension of enhanced unemployment benefits, saying Sunday that Congress needs to “quit jerking low-income people around.” What Clyburn said: “This one week, two weeks, this jerking people around is not the way we ought to be conducting ourselves as custodians of this great democracy of ours.” Why it Matters: While Republicans and Democrats disagree on the additional relief to Americans who have lost their jobs due to the coronavirus pandemic, millions of Americans are now entering a new week without crucial unemployment benefits, many of whom relied on the aid more than their previous employment.

Minneapolis Federal Reserve Bank President Neel Kashkari advised widespread lockdown of around 6 weeks to a month, however controversial, could be crucial in helping the U.S. economy weather through some of the worst financial devastation our country has seen in decades What Kashkari said: “If we were to lock down hard for a month or six weeks, we could get the case count down so that our testing and our contact tracing was actually enough to control it the way that it’s happening in the Northeast right now. They had a rocky start, but they’re doing a pretty good job right now. Now, if we don’t do that and we just have this raging virus spreading throughout the country with flare ups and local lockdowns for the next year or two, which is entirely possible, we’re going to see many, many more business bankruptcies, small businesses, big businesses, and that’s going to take a lot of time to recover from to rebuild those businesses and then to bring workers back in and re-engage them in the workforce. That’s going to be a much slower recovery for all of us. Why it matters: As Kashkari noted to John Dickerson, “Until we have that real confidence, not just wishful thinking, but in the data real evidence it is safe, we’re not going to have a meaningful economic recovery.”

4. Dr. Scott Gotttlieb: “It’s going to be hard to keep the virus out”

Gottlieb warns “It’s going to be hard to keep…

Dr. Scott Gottlieb, former head of the Food and Drug Administration, warned that the country’s rate of coronavirus infections indicates “it’s going to be hard to keep the virus out.”What we asked: Is what’s happening in the Midwest the same version of what was happening in the Northeast and then South and West?What Gottlieb said: “”I think there’s a lot of infection around the country…It’s going to be hard to keep the virus out. Even in the Northeast right now, it’s going to be hard for that part of the country not to get re-seeded, and so you’re just seeing it rotate through different parts of the country.” He added, “It’s going to be this slow burn, unfortunately, for the rest of the year. So as Sun Belt states are declining right now, we’re seeing infection rates pick up in the Midwest. And right now, the rate of infection across the country, if you look at some of the models, is probably one in 70 individuals right now are actively infected. So there’s a lot of infection across the entire United States.Why it matters: As Gottlieb pointed out, the unanswered question is whether the combination of limited mitigation, such as keeping bars and indoor venues closed and greater adherence to mask mandates, will be “enough to keep the virus out?””We certainly hope so,” he noted. “If it is then we’ve sort of found a happy medium between strict lockdowns and just letting it spread unchecked that could keep this at bay.”

Vanita Gupta says U.S. to “gear up” for surge…

Vanita Gupta, president and CEO of the Leadership Conference on Civil and Human Rights says that Americans need to prepare now for what will be an election season, not day, due to record number of mail-in-ballots amid the ongoing coronavirus pandemicWhat Gupta said: “It is really important right now as states are making these changes that voters apply for their absentee ballots early, that they fill them out carefully and that they then send them back early so as not to overwhelm polling places on the day of election on November 3rd. And we also, the media has to be prepared. Look, we’re in an unprecedented time. We may not- we’re not going to be able to call the election, the media won’t be able to call the election on the night of November 3rd if we actually want these absentee ballots to be counted. And people will be voting in droves, tens of percentage points higher by mail than before. We want to make sure all of the ballots are actually counted. And so we also have to become used to this notion that we may not- we are not going to have those results. What it matters: With the president calling into question the authenticity of mail-in-ballots, an informed and prepared republic is more important than ever heading into this already contested election cycle.

It’s another two states and another two competitive contests, as concern about President Trump’s handling of the coronavirus continues to take a political toll on his re-election bid. CBS News’ Elections and Surveys Director Anthony Salvanto unveiled the latest CBS News Battleground Tracker poll with a closer look at key states North Carolina and GeorgiaFind more of Salvanto’s reporting from today’s “Face the Nation” here