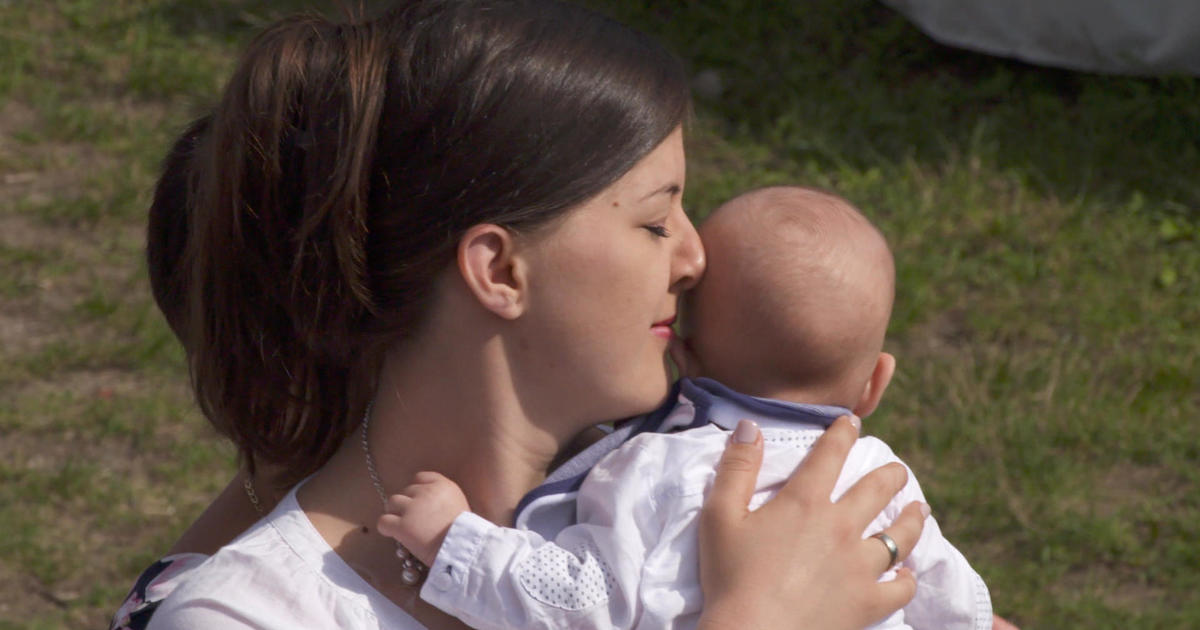 Hungary paying citizens to have babies

For a country of fewer than 10 million, and dwindling, Hungary has been in the news a lot recently. And as we head towards the 2020 U.S. presidential election, you can expect to hear more about Hungary; it has become a striking example for how a society can slink from democracy into autocracy. It doesn’t happen overnight. We reported on this shift last March, focussing on a program which on its face seems perfectly reasonable, designed, as it is, to stimulate birthrate. The Hungarian government has taken over most private fertility clinics, and also gives away cash, loans and even-get this-subsidies to buy minivans to young couples who become new parents. It’s an effort, as the slogan goes, to “keep Hungary Hungarian.” But peel back the layers and it reveals something else entirely: social engineering designed to yield only a certain kind of Hungarian baby.

It’s an almost relentlessly pleasant Saturday outside of Budapest. The Skanzen Park has been transformed into a festival of good, clean all-ages fun, balloons and comic books and piggy-backs. It’s the annual celebration sponsored by Hungary’s Association of Large Families and for the first time there is a mass wedding, five couples embarking on marriage in front of hundreds of their closest friends.

Katalin Novak, Hungary’s Minister of State for Family and Youth Affairs is on-hand as well, spreading the government’s message of clan and country.

“It is good to share their joy,” Novak said. “Which is why the government protects the marriage of man and woman, and why we protect the families and children in Hungary.”

She spearheads what is termed the Family Protection Action Plan. This sweeping government program was unveiled last year at a cost of $2.5 billion, that’s 5% of Hungary’s GDP and four times what the country spends on military. The plan offers couples who have three kids a subsidy to get one of those minivans.

“I mean, the car sounds nice,” Zoltan Benko, one of the grooms from the day’s mass wedding, said. “But two, three kids. I– I mean– I mean, I think that’s– that’s all we can handle right now. I mean, even in imaginary terms.”

It’s not just minivans they’re offering. Almost like a prize list at an arcade. The mere promise to have one child gets you a $30,000 loan. Rates are slashed after two kids and forgiven after three. Commit to having four kids or more? Mom doesn’t have to pay income tax for life.

Terms and conditions apply and the plan isn’t open to everyone. But it does address a huge problem that the country faces: A low birth rate and the hemorrhaging of people. Hungary’s population, now under 10 million, has declined for 37 straight years.

It’s a curious place, Hungary, a mix of Eastern and Western Europe. Its capital, Budapest is a regal city, divided by the Danube, Buda on one side and Pest on the other. It trades on its classic grandeur and nods to the past. Budapest has long been a city of sensual pleasures and its thermal baths, “taking the waters,” as it’s called, has adjusted for the times. The place has a language and cuisine like no other. And for centuries, Hungary has been a sort of territorial football, passed around among Turks and Germans, Hapsburgs and Communists. After World War II, Hungary was part of the Soviet bloc.

In 1989 Hungary set off a chain of events that brought down the Berlin wall.

“In May, Hungary began cutting down the barbed wire, becoming the first East Bloc country with an open border,” CBS News’ Anthony Mason reported at the time.

Hungary might have been the first country to puncture the Iron Curtain, but 30 years later, it is at the vanguard of the European right.

So much so that Hungarians we asked, struggled to characterize the country’s current form of government.

Anna Donath is a Hungarian member of the European Parliament and a leader of the Momentum Party, a political upstart which opposes the government that’s now been in power for ten years.

“Do you not feel you’re living in a democracy right now?” correspondent Jon Wertheim asked Donath.

“Well, it’s a tricky question, because by law and regulation, it’s a democratic country,” Donath said. “It would be too easy to say that– that it’s a dictatorship. It’s not. It’s clearly not. We can say that it’s an autocratic regime, but autocracy is a scale.”

Hungarian Prime Minister Victor Orban certainly doesn’t see himself as an autocrat. He popularized a term to describe his regime, “illiberal democracy.” You heard that right: illiberal democracy. It’s a system governed by a forceful ruler with a public that won’t or can’t fall out of step.

The European Union has deep concerns about Hungary’s membership. It recently voted to sanction the country, accusing Orban of systematically rolling back democracy and it has leveled charges that read like a sort of strongman’s playbook: redrawing voting districts, rewriting the constitution, restricting freedom of speech and stacking the courts.

Orban’s policies, though, have been delivered not as brutally forceful blows, but as well-placed jabs: gradual, subtle, and, arguably, above the belt. Orban and his manipulative maneuvers provoke outrage among opponents but also draw a measure of grudging respect.

“He’s a genius in one hand,” Donath said when asked how she would describe Orban. “He’s a political strategist.”

“Well, actually, you can feel it in your skin in everyday life in Hungary, you feel that—his power,” Donath said. “There is a higher power, a big brother, watching you everywhere, listening what you are saying.”

Orban’s creeping control is presented as reasonable public policy. On the face of it, the Family Protection Plan does make it easier for families to have kids.

But it doesn’t take much to shade into something darker. Just listen to the speaker of Hungary’s Parliament at a conference last September: “In Europe, those who propagate that having children is a private matter, are serving the culture of death,” he said. “Countries with declining population are becoming houses of coffins and not cradles.”

“You’re right. And it’s absolutely horrifying,” Donath said. “And me, as a young woman who just got married and wants to start a family, I’m sorry, but I don’t want to accept that my prime minister, my government, the state wants to tell me what kind of family and how I should start with. And they are actually blaming me that I’m 32 and I don’t have a kid yet.”

“Do you feel that?” Wertheim asked.

“And they said that I’m supporting the culture of death, whatever it means,” Donath said. “Actually, this makes us really, really angry.”

And she highlights a glaring irony in all this. The same government that strenuously tries to boost population, also goes to extraordinary lengths to keep non-Hungarians out. In 2015, hundreds of thousands of refugees and migrants, most from the Middle East, passed through Hungary. They were told they were not welcome to stay.

Peter Kreko, a social psychologist, is head of the Political Capital Institute, a Budapest think tank. He said that though Hungary is overwhelmingly white, Orban paints migrants as the enemy, a threat to Hungary’s homogeneity.

“Stories being that refugees and migrants are all around,” Kreko said. “They are stabbing the people. They are raping the women. They are killing everyone. There is no rule of law.”

“How does this new family protection plan,” Wertheim asked Kreko, “how does that fit into Orbán’s overall strategy?”

“How does it fit in one sentence? ‘We don’t want migrants. We want– want Hungarian mothers to give birth to more children,'” Kreko said. “This is how we want to solve the demographic crisis.”

For Prime Minister Orban it reduces to a simple concept: procreation, not immigration. He did what President Trump promised to do. In 2015, Orban slammed Hungary’s gates shut, building, essentially, a border wall, a $500 million fence 180 miles long on the southern border with Serbia.

Laszlo Toroczkai, the mayor of the small border town of Ásotthalom, was one of the loudest voices urging the Hungarian government to erect the fence. When he got his wish, he became something of a populist, cult hero.

“This is about preserving, we keep hearing, ‘European values,'” Wertheim said to Toroczkai. “What does that mean?”

It goes beyond pleasures of the ear, though. He also objects to mixing tastes.

“The foods, the European foods,” Toroczkai said. “For example, the doner, kebab, in Berlin, Budapest. I would like to eat the Doner Kebab in Istanbul.”

“We’re spending a half a billion dollars on a fence to keep out Doner Kebabs?” Wertheim asked.

“You know– we need this border fence to preserve our– our safe country,” Toroczkai said.

In the same town, we found Sandor Nagy, who’s part of the mayor’s posse, patrolling for migrants. You might think he would be precisely the kind of person to benefit from the Family Protection Plan. After all, he and his wife moved from Budapest to raise their eight children in this pastoral paradise. But he’s excluded, not enough savings to qualify.

And they are not alone. Other Hungarians have found themselves ineligible because they are gay, unmarried, divorced. Read the fine print, and this becomes clear: The Family Protection Plan only seeks to protect what the government sees as the right kinds of families. Prime Minister Orban seldom speaks to western media, but we did speak with Secretary of State Katalin Novak, who says the plan is entirely consistent with Hungarian values.

“We speak about not only preserving Western civilization, we also, to say it openly, that Christian culture we would like to preserve,” Novak said.

“Yeah, that’s the way of life in Europe, in Hungary, that we have a Christian way of life,” Novak said.

“When you hear your colleagues in government, including the prime minister, talk about ethnic homogeneity and the dangers of– of mixing blood and purity,” Wertheim said, “can you see how people perhaps don’t hear echoes of some of Europe’s darker chapters in those remarks?”

“It makes me upset, because I think it means that people who– who– who have this interpretation either don’t really know what they are talking about, or don’t know Hungary,” Novak said.

“You’re saying, there’s no code in that,” Wertheim said. “There’s no code when we talk about ‘keep Hungary Hungarian’ or pure Hungarians, or we talk in terms of purity. There’s no–“

“But again, you say pure Hungarian. Why? What– we don’t say that,” Novak said. “We say, ‘Keep Hungary Hungarian,’ that’s true. We say that.”

While more than 100,000 couples have already taken advantage of the incentives, it’s too early to tell whether the Family Protection Plan will actually be effective, whether it will cause the desired population bounce or deepen a rift in Hungary, much like the Danube cleaves Budapest.

Government statistics released last month indicate that from January to April 2020 there was an increase of 5.5% in the number of babies born in Hungary.