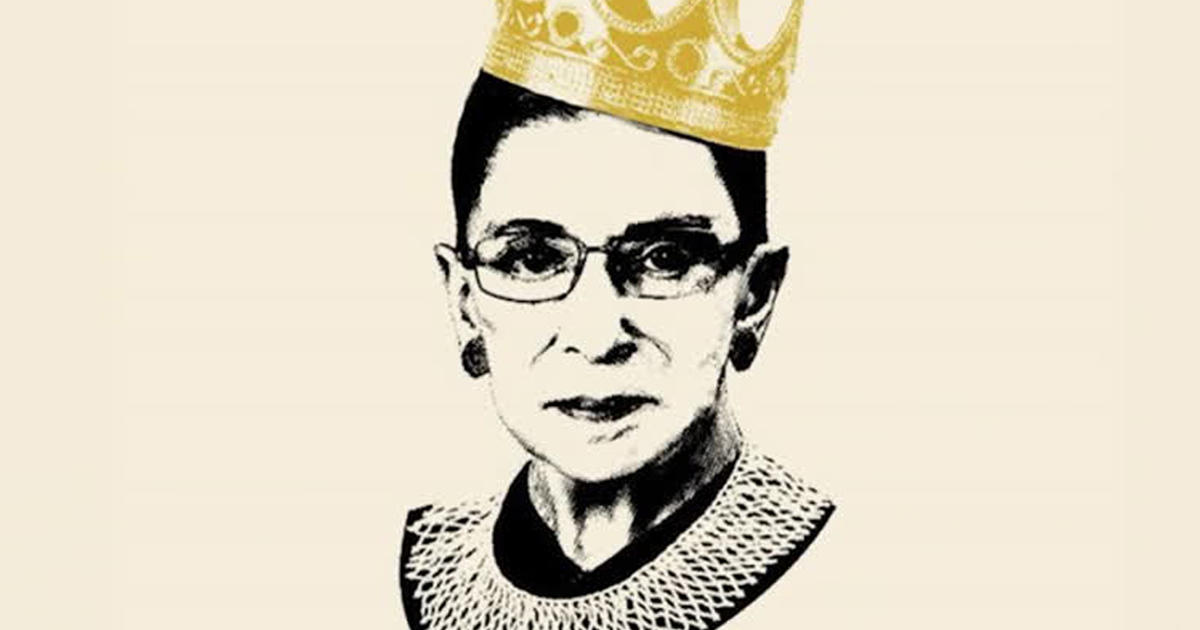 Supreme Court Justice Ruth Bader Ginsburg, who died Friday at age 87, became an unlikely pop culture hero in her 80s, inspiring slogans like “You can’t spell truth without Ruth.” Her long career also inspired a Hollywood biopic, “On the Basis of Sex,” about her first gender discrimination case.

Ginsburg embraced her pop culture icon status, along with her crown as the “Notorious RBG,” a play on late rapper Notorious B.I.G.

“It was beyond my wildest imagination that I would one day become the Notorious RBG,” Ginsburg said.

“They were both from Brooklyn,” said Irin Carmon, who co-authored the book “Notorious RBG: The Life and Times of Ruth Bader Ginsburg.” “But it was also the case that they’d both used language to protest.”

Ginsburg got the nickname in 2013 after the Supreme Court invalidated a key part of the Voting Rights Act, and she issued a fiery dissent – likening the curtailment of voter protection to “throwing away your umbrella in a rainstorm because you are not getting wet.”

“I think people respond to the notion that somebody can have overcome all of this and then, turned around, finally given a position on the highest court in the land,” Carmon said, “and using that power to speak out when things are wrong.”

Ginsburg and her blistering dissents have inspired T-shirts, tattoos, a species of praying mantis dubbed Ilomantis ginsburgae, and even a character on “Saturday Night Live.”

But more importantly, she continues to inspire a younger generation.

Twelve-year-old Michele Threefoot was so influenced by Ginsburg that when her Maryland school had a superhero day nearly four years ago, she dressed up as RBG. “I was reading a book about her then, and I was really touched,” Threefoot told CBS News correspondent Vladimir Duthiers. “I liked how she was, like, a little kid. … she still fought for what was right. And she kept doing that.”

Threefoot wasn’t the only one inspired by Ginsburg.

“Seeing a minority, a Jewish woman, on the Supreme Court gave me a lot of confidence to do what I do with my student court,” said high school senior Leyla Fern King, who has been serving on her school’s student court since the seventh grade.

Supreme Court Justice Ruth Bader Ginsburg, a champion of women’s rights, has died at the age of 87.

“I was the only girl there, and I think one of the few people of color on the court,” she said. “She has so much strength. That gave me a lot of confidence to keep doing what I do.”

Despite her popularity, Ginsburg “did not seek the spotlight,” said Carmon.

“She was actually by nature kind of a shy person,” she said. “She saw her own life as fulfilling promises that her mother had been denied.”

And, Carmon said, “She wanted better opportunities for generations that came after her.”

Remembering RBG, a woman who lived a life defying expectations

« Chelsea Clinton on her new book, "She Persisted in Sports," and the death of Ruth Bader Ginsburg

Biden had $141 million cash advantage over Trump heading into September »