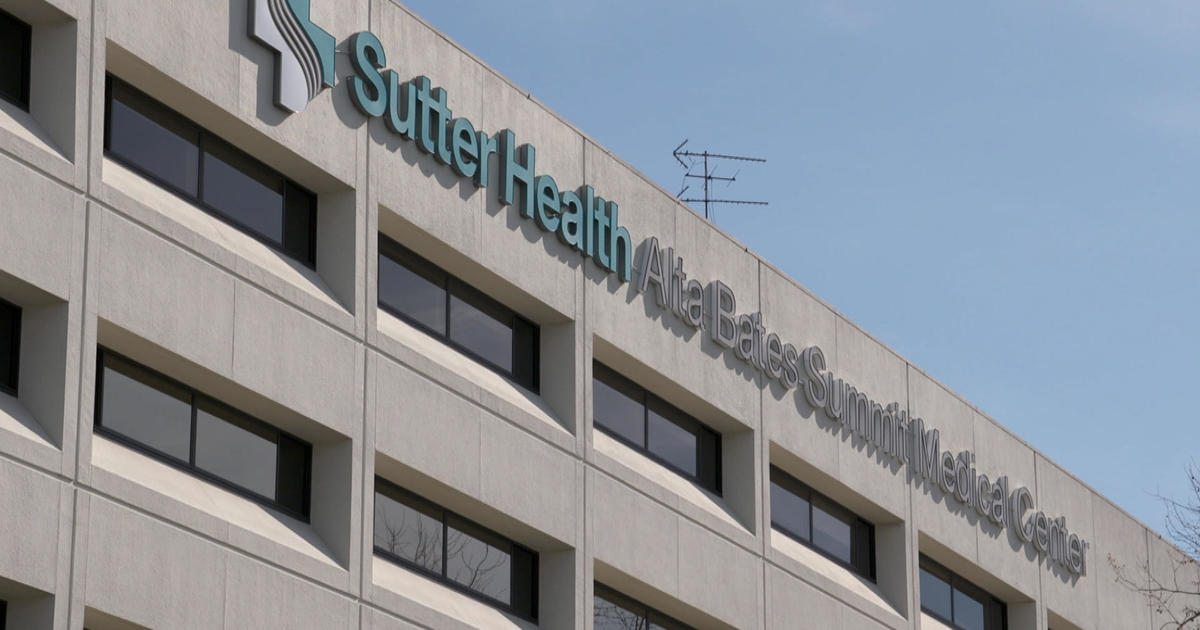 The coronavirus pandemic has unleashed more than a flood of disease in this country. It’s also expected to accelerate a wave of hospital mergers and acquisitions – with big hospitals buying up smaller ones. This consolidation, economists say, is one of the main reasons the cost of health care in this country is going through the roof.

There’s a lawsuit over this in COVID-ravaged California, with the state attorney general claiming that Sutter Health, a hospital chain based in Sacramento, got so big it had essentially become a monopoly.

On the eve of the trial, Sutter tentatively agreed to a settlement that’s awaiting a judge’s approval. But this is, even at this stage, a landmark case because it pulled back the curtain on what has rarely been seen or so thoroughly documented before: how and why hospital prices have been skyrocketing.

Sutter is a sprawling health care system that’s the largest and most dominant provider in Northern California.

Xavier Becerra: They’re like the bully on the block. They were able to bully everyone else to conform; it was my way or the highway.

The state’s attorney general, Xavier Becerra, filed a civil lawsuit against Sutter in 2018. We interviewed him before the pandemic and before he was nominated for secretary of Health and Human Services.

Till they amassed a conglomerate of 24 hospitals, 12,000 physicians, and a string of cancer, cardiac and other health care centers.

Xavier Becerra: Sutter got big enough that it could use its market power to dominate, to dictate. It was abusing of its power.

The suit accuses Sutter of embarking on “…an intentional, and successful, strategy…” of cornering much of the market in Northern California, and then jacking up prices — for example, on the price of delivering a baby.

Xavier Becerra: You live in Sacramento, you can expect to pay twice as much to deliver that baby here than in your hometown of New York City.

Lesley Stahl: I actually heard that it costs more to deliver a baby here in Sacramento than anywhere else in the entire country.

Xavier Becerra: Why Sacramento should be the most expensive place to have a baby– there’s no way to explain it.

Lesley Stahl: When you did the investigation, did you look at other variables that might have been the reason for the higher prices? Quality might have been better? Maybe equipment was better? Did you take all that into consideration?

Xavier Becerra: That’s why this investigation took years, because you have to eliminate all the other reasons that might be out there. And you can’t explain it away by the cost of living, cost of labor.

Lesley Stahl: Or quality of care?

Xavier Becerra: Or quality of care.

Sutter’s quest to dominate the market, Attorney General Becerra says, began in the 1990s with a campaign of mergers and acquisitions that enabled it to grow from two hospitals into the behemoth it is today.

Glenn Melnick: They really pioneered this model of reducing competition to raise prices. They were the first one to do it. And the prices continually grew faster and faster than other comparable hospitals.

Glenn Melnick is a health care economist at the University of Southern California who consulted on the lawsuit and was one of the first researchers to document Sutter’s strategy of making itself indispensable. He found, for instance, that in 11 counties of Northern California…

Glenn Melnick: They’re either the only one hospital, or one of two hospitals. And some of these counties are 1,000 square miles. So–

Lesley Stahl: And there’s one or two hospitals in a thousand square miles?

Glenn Melnick: That’s right. So they have monopoly powers in a number of these counties, right? And their prices went up. The next year, they went up even faster. And they figured out, “Wow, this really works!”

Glenn Melnick: If Sutter is able to raise their prices by improving quality, value, and service, that’s fine. What they came up with is a model that allowed them to acquire market power, and get higher prices without doing any of those good things for consumers.

In the lawsuit, evidence showed that Sutter’s quality of care, while well-regarded, was generally comparable to other hospitals in California, and that its higher prices have been contagious.

Hillary Ronen is a member of San Francisco’s city and county board of supervisors and sits on its budget committee.

Hillary Ronen: We have so many difficult problems in San Francisco that we’re trying to fix.

Lesley Stahl: I understand that the City and County of San Francisco spends roughly $800 million a year in health costs.

Hillary Ronen: That’s right. That money comes from the same pot of money that we use to build new homeless shelters to hire firefighters, to pave our streets, to repair our parks. And the more we’re paying on employee health care, the less we’re paying on the toughest entrenched problems we’re trying to fix in San Francisco.

A reason their health costs were so high, she says, is because Sutter was able to block the city and its insurer, Blue Shield of California, from steering employees to hospitals with lower prices. And it was able to prevent Blue Shield from telling the city what Sutter’s hospitals would charge for individual procedures.

Hillary Ronen: Sutter won’t allow us to see how much they charge for their services. It– it’s unbelievable. And so we can’t comparison shop. And they keep naming their price, and I feel like I’m handcuffed to do anything about it.

Lesley Stahl: They can’t fight either? They are also blocked?

Hillary Ronen: They are. Blue Shield is as at the whim of Sutter naming its price as we are. For once in their life the insurance company is not the worst actor in the room, it’s Sutter.

The state accused Sutter of using its “windfall” from its “excessive pricing” to finance the acquisition of new hospitals and physicians groups. And to pay its outgoing CEO $13 million in 2016, and a year later, paid its new CEO $6 million. It galls Hillary Ronen that Sutter is a not-for-profit company, meaning legally it pays no taxes even though it earned $13 billion in revenue last year.

Hillary Ronen: Sutter avoids tens of millions of dollars a year in local property taxes. And at one hospital alone they’re avoiding $20 million a year.

Lesley Stahl: Wow. And business taxes that they don’t pay are added on top of that.

Hillary Ronen: Are added on top of that.

Lesley Stahl: –which suggests that they’re not out for financial gain.

Lesley Stahl: So how does that square?

Hillary Ronen: At any way you look at it, any path you look, we are getting screwed. (LAUGH)

Lesley Stahl: So who are some of these big companies?

Lesley Stahl: So here you have these giant companies. You think of them as being all-powerful. And they could not control Sutter? Wow.

Elizabeth Mitchell: They could not. The more hospitals they acquired, the more physicians they employed, the more leverage they had in the market. And they did this very strategically. So, if there was a specialty, say maternity, that they knew every employer would need, they created a monopoly around maternity. So if an employer would try to exclude the system, they said, “Well, you can’t do that because you have to have our maternity services.”

Elizabeth Mitchell: As an example, they control the maternity care.

According to the lawsuit, Sutter used its leverage to force the big companies and their insurers into what are called “all-or-nothing” contracts, meaning that they had to include all 24 of Sutter’s hospitals in their health plans.

Elizabeth Mitchell: And sometimes they would have to include hospitals that were in regions that the employers didn’t even have employees in.

Lesley Stahl: Sutter was forcing big companies to cover hospitals in places where nobody worked for the company lived?

Elizabeth Mitchell: That’s right. It was all or nothing and no employer could do without all of the Sutter system.

We asked Sutter for an interview, but the hospital declined and instead sent us a statement saying, in part, that it’s committed “…to high-quality, affordable care…” and that its coordinated health care network “delivers healthier patient outcomes at a lower total cost of care,” something that “…has proven even more critical during the COVID-19 pandemic.”

Lesley Stahl: Sutter says that when you have a system as big as theirs, what they can offer is coordinated care. They can reduce duplication and they can cut costs. Now that sounds reasonable.

Elizabeth Mitchell: Well, that is true in every other industry. That they use their size to reduce their prices. And yet the opposite has been true in health care. They merge and then they use their market leverage to increase prices.

Lesley Stahl: But what about this idea of coordinated care? I think that was one of the reasons that these mergers were allowed to happen.

Most alarming, she says, hospitals across the country have been following Sutter’s lead.

Lesley Stahl: Do you think that this is the main reason that health costs are going up?

Elizabeth Mitchell: We have seen the data. It is the largest driver of health care cost increases. It’s hospital prices. And they’re not providing more services. And the quality isn’t increasing. They are just charging more for the same thing. It is just the prices. And they do it because they can.

Attorney general Becerra and Sutter are waiting to see if the tentative, out-of-court settlement they reached is approved. If so, Sutter will admit no wrongdoing, but will pay $575 million and agree to stop blocking patients’ access to less expensive hospitals and requiring “all-or-nothing” contracts.

Lesley Stahl: You called this case a “big effing deal.” Why?

Xavier Becerra: This settlement is gonna change the life for hundreds of thousands of Californians. And I’d say millions of Americans because I think you’re gonna see other states take what we did and say, “Ah-hah. We’ve got some facilities that are behaving the same way. Let’s push.”

Lesley Stahl: So you think this– what you did’ll become a model.