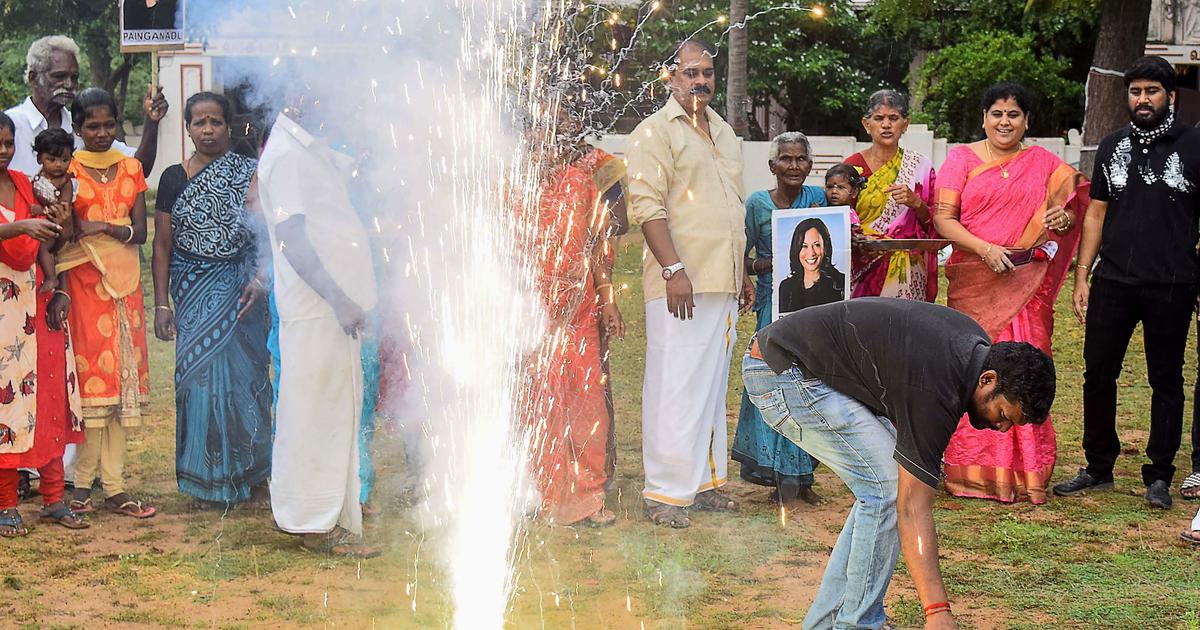 Vice President-elect Kamala Harris‘ ancestral village in southern India rejoiced on Sunday after she and President-elect Biden were projected to win the presidency. Firecrackers erupted and prayers were held in Thulasendrapuram, the village where Harris’ maternal grandfather was born and raised, after she made history by becoming the first woman, the first Indian American and the first Black woman to win the second-highest U.S. office.

Residents wrote “Congratulations Kamala Harris. Pride of our village” in colorful powder in front of their homes and celebrated by handing out buckets of freshly made traditional sweets and playing music, according to Reuters. At the village temple, a priest performed a special prayer in celebration of Harris’ win. Some residents waved posters featuring a photo of Harris, while others set off firecrackers.

Residents hold placards with the portrait of US Democratic Vice President-Elect Kamala Harris, as they celebrate her victory in the US election, at her ancestral village of Thulasendrapuram in the southern Indian state of Tamil Nadu on November 8, 2020.

Villagers had also assembled at a temple for a ritual and prayed for a Biden-Harris victory in the days leading up to the election.

“A woman hailing from this small village now holds one of the highest positions in U.S. It’s a proud moment,” R Kamaraj, a government minister in the southern state of Tamil Nadu who joined the celebrations, told Reuters.

Even though her ancestors moved away decades ago, the small village of Thulasendrapuram has embraced Harris.

Early Sunday morning, firecrackers went off and prayers were held in Thulasendrapuram, India, the ancestral village of VP-elect Kamala Harris, to celebrate her making history to become the first female, Black and South Asian American to win the second-highest U.S. office pic.twitter.com/u4XPhUfbnw

Harris’ mother, who was born in India and moved to California for graduate school, often took her to India to visit their family. Harris’ grandfather, P.V. Gopalan migrated from Thulasendrapuram to Chennai, capital of the Indian state of Tamil Nadu, nearly 90 years ago.

Harris has often spoken about how her Indian grandfather, who was among millions of people who joined India’s independence movement, has shaped her values and helped inspire her ideals of justice. Those conversations with him left a profound impact, Harris said in a 2018 speech.

Harris spoke about her Indian heritage during the campaign. In her acceptance address, Harris mentioned the support she had received from her “chittis,” a Tamil word for aunts.

She has been in close touch with her family in India and her maternal uncle Gopalan Balachandran, who lives in New Delhi, told Reuters he is planning a trip to Washington to see his niece sworn in as vice president in January.

“It (the suspense and delay in results) didn’t affect me at all because I studied the data… I knew she was going to win. So, I was not tense, except I wanted the final results to come in so that I could go and sleep,” he told the agency.

“I knew she was going to win”: The Indian uncle of U.S. Vice president-elect Kamala Harris said on Sunday he knew she would win. Harris' maternal uncle, Gopalan Balachandran, who lives in south Delhi was elated by her win and said he would attend her swearing-in ceremony pic.twitter.com/5i8gxQQYkT

Kaling tweeted images of Harris and wrote “Crying and holding my daughter, ‘look baby, she looks like us.'”

« Ken Burns on America, selling his first film and more