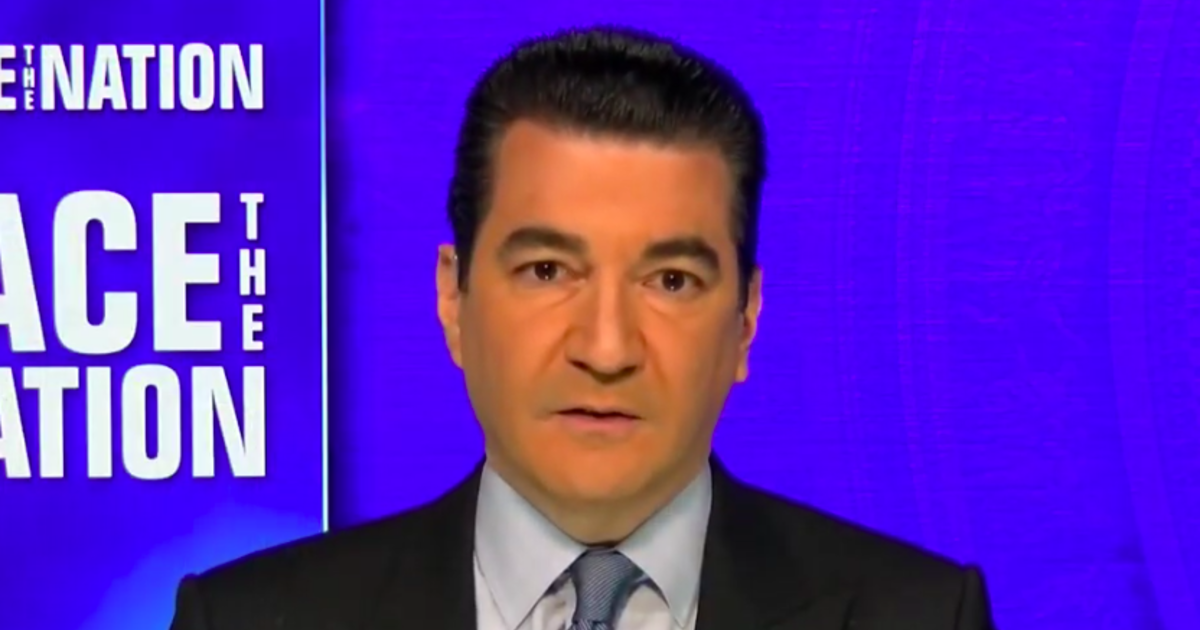 Gottlieb says strain on hospitals likely to peak in January

Washington — Former Food and Drug Administration Commissioner Dr. Scott Gottlieb warned Sunday that coronavirus infections are likely to peak in January with the hospital system experiencing strains for several weeks after, as Americans gather to celebrate the holidays with their families despite predictions from public health officials of a difficult winter.

Gottlieb predicted coronavirus cases are likely to continue increasing through the end of December and into early January, with the number of infections peaking at some point then.

“But the burden on the hospital system is going to continue for another three weeks past that,” he said.

The nation is experiencing another surge of coronavirus infections, with cases surpassing 16 million in the U.S. and the number of deaths nearing 300,000, according to Johns Hopkins University. In anticipation of a spike in cases stemming from the holidays, public health officials urged Americans before Thanksgiving and now Christmas to forgo their usual celebrations in favor of scaled-down gatherings.

But the death toll continues to mount, and Centers for Disease Control and Prevention Director Dr. Robert Redfield said last week that for the next 60 to 90 days, the country is going to experience more deaths per day than from the attacks on September 11, 2001, or Pearl Harbor.

Gottlieb said there is an acceleration in cases on the East and West Coasts, while new cases are slowing in the Midwest and the West.

“The entire country isn’t going through this pandemic at the same time,” he said.

The coronavirus crisis entered a new phase last week, though, with the FDA authorizing a COVID-19 vaccine developed by Pfizer and Germany’s BioNTech for emergency use Friday. The first shipments of the vaccine went out Sunday morning, with nearly 3 million doses bound for more than 600 sites nationwide. Health care workers and nursing home residents will receive the first round of vaccinations, and the federal government expects doses will be delivered to vaccination sites within three weeks.

Gottlieb, who serves on Pfizer’s board of directors, said the pharmaceutical giant has manufactured most of the doses it will deliver this month, with 25 million doses for the United States. Pfizer committed to delivering up to 100 million doses of its coronavirus vaccine by the end of the first quarter of 2021, and Gottlieb said he’s confident the company will “hit that target.”

The rollout of the coronavirus vaccine marks the biggest vaccination effort in the nation’s history, one that is not without challenges. Pfizer’s vaccine must be stored at roughly 94 degrees below zero, and the company is using containers with dry ice and GPS-enabled sensors to ensure shipments remain cold.

But a key issue, Gottlieb said, is the “last mile,” ensuring vaccines are being distributed into communities.

“Initially they’re going to be distributing to hospitals for health care workers and nursing homes, so that’s a little bit of an easier challenge. You know where those institutions are. You can get to those individuals,” he said. “Once they go into the community and start trying to vaccinate, for example, elderly individuals who might not be able to leave their home, they’re going to have a challenge getting into those parts of the country, especially in disadvantaged communities.”

An example of this problem, he said, is distribution of antibody drugs.

“Some states aren’t distributing those very evenly. I’m told some states really aren’t making use of them. They haven’t distributed their available supply because they’ve had challenges getting those systems up and running,” Gottlieb said. “I think that’s a concerning harbinger for the challenges they’re going to face with the vaccine in that last mile challenge.”

Where the voters stand: Coronavirus and the 2020 results »