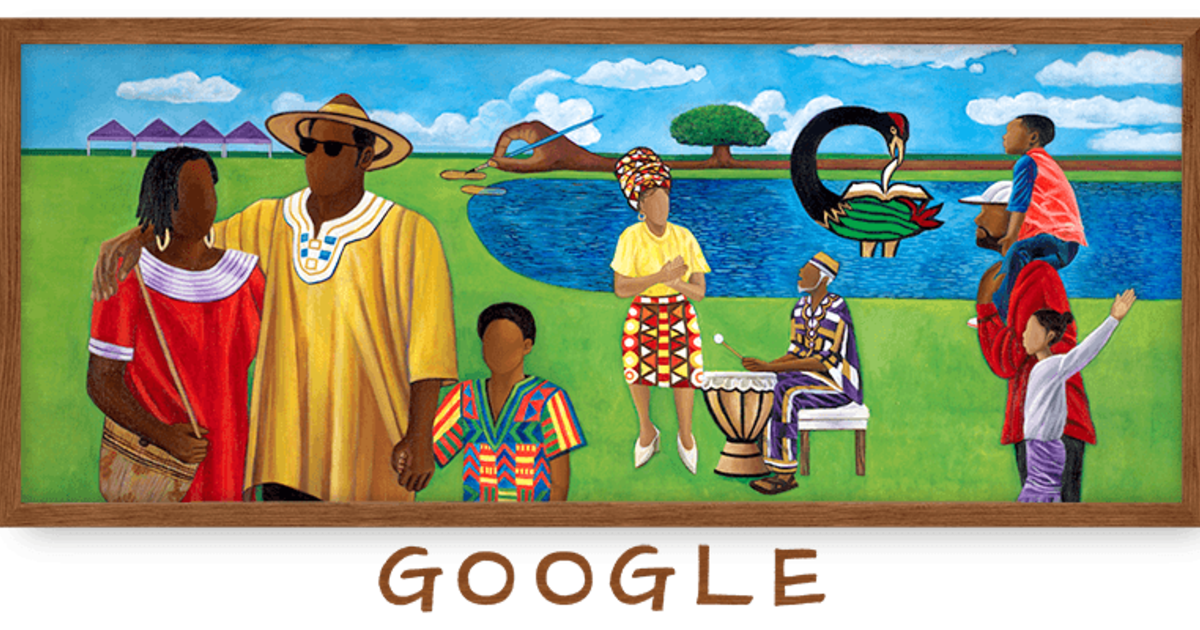 Google often celebrates holidays and milestones with unique, themed drawings of their logo – so-called “Google Doodles.” Juneteenth happened to fall on Father’s Day this year, and the Google Doodle to celebrate it was created, fittingly, by a father-son duo.

Jerome and Jeromyah Jones, two artists based in Virginia, said they were inspired in part by the “commonalities we see during this year that the two holidays coincide.” The painting includes a man with a child on his shoulders, a hand holding a paint brush, and a Sankofa bird, is a symbol for looking to the past and bringing back what is useful for the future.

“If we were to give our Google Doodle a title we would call it ‘Painting in The Footsteps of Our Freedom,'” the Joneses said. “Painting in the footsteps means we are giving color to the past so that the legacy will be visible to every child in class.”

“If we were to give our Google Doodle a title we would call it ‘Painting in The Footsteps of Our Freedom,'” the Joneses said. “Painting in the footsteps means we are giving color to the past so that the legacy will be visible to every child in class. The red, black, and green Sankofa bird looking back is symbolic of opening the history book in our laps to close the generational gap.”

A hand painted in the background of the work “symbolizes the descendants of those who were emancipated on June 19, 1865 and the children of fathers in the generations that follow,” and a paintbrush in the hand represents the “that connects the roots to their fruits,” they said.

The people in the painting are silhouettes without faces, so that people can see themselves in them, the Joneses said. They used acrylic and oil paint to create the vibrant work.

“When we work on pieces like this together our initial sketching is not on the canvas but in our conversations,” they said. “In a case where we both love the theme, it’s exciting having each other on the team. Once we conceive the vision, then there’s the decision on which one of us will paint what images with the brush.”

Jerome W. Jones, Jr. has been an artist for 40 years, and uses his original paintings to teach “the art of life through the love of art” to inspire the young and old to use their gifts to uplift others. His son, Jeromyah Jones, is a painter and writer who followed in his father’s creative footsteps. Together, they have had exhibits across the U.S.

“Working on the topic of Juneteenth means a lot to us because it’s a great milestone in the African American struggle for liberation,” they said. “This notification that our ancestors received 157 years ago is an essential catalyst for contemplating what freedom looks like for us today as a people. The celebration is a special commemoration because it highlights good news for a change that was given to a people who were once in chains.”

CBS News has reached out to the Joneses for more information and is awaiting response.

« New weight loss treatment gets heavy marketing. How well does it work?