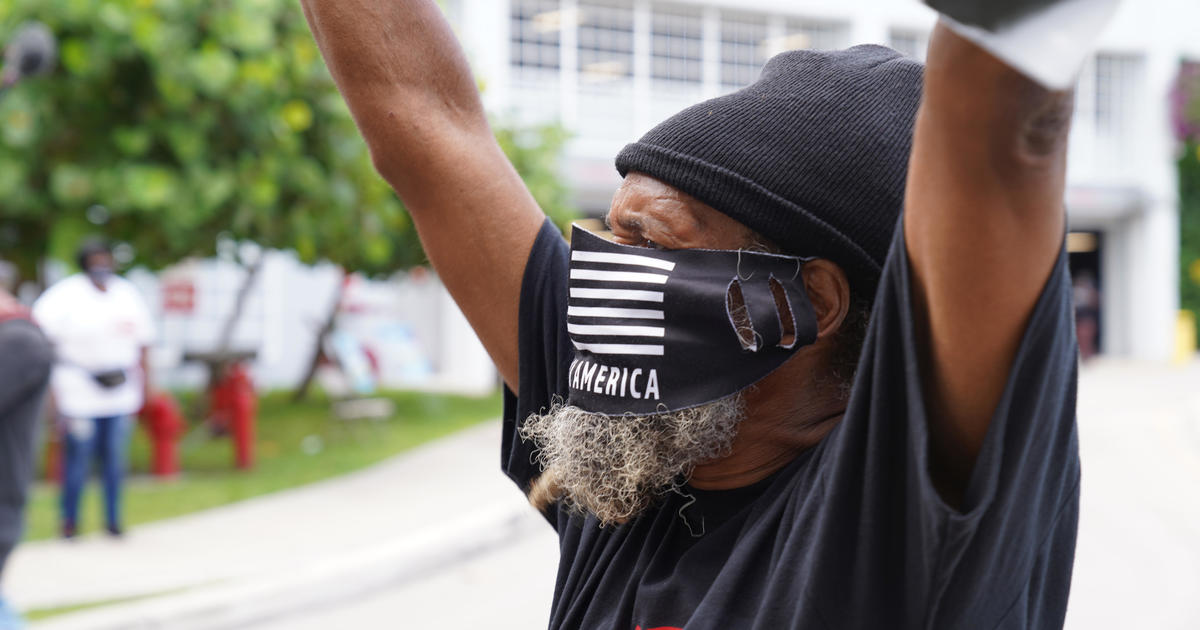 “Free the vote!” chanted Ijaymn Gray, 40, his fist held high, as he marched shoulder-to-shoulder with his father Randy Hudnell, 63, towards an early voting location in Miami, Florida. Dozens of voting rights activists and marchers filed in behind them, their fingers flashing the number four, symbolizing Florida’s landmark Amendment 4, which restored the right to vote for many former inmates in the state.

Between the two of them, the father-son duo had spent over 50 years in and out of the Florida prison system, and nearly their entire lives apart. Prior to the passing of Amendment 4, their status as former felons meant neither had ever cast a ballot.

Randy Hudnell raises four fingers to represent Amendment 4, which restored the right to vote to most former felons in Florida who’d completed their sentences.

“I’ve been waiting on this moment for my entire life,” Gray told CBS News. “This is an award-winning, historic moment for me, and for my father. Between the both of us, we have 103 years of not voting.”

Gray cast his first-ever vote last year in a local Miami election once the amendment allowed him to register. His father had never seen the inside of a voting booth until this day.

“I’m so proud of him. They opened the door and they let me in,” said Hudnell of his son’s activism, which ultimately led to Gray helping his father register to vote.

The door was opened in 2018 when Floridians passed Amendment 4 to the state constitution during the midterm elections. Florida was one of only four states in the country that did not automatically restore a right to vote for its citizens after being convicted of a felony and completing their sentence.

Ijaymn Gray, 40, and his father Randy Hudnell, 63, cast early ballots in the 2020 presidential election. They regained the right to vote under Florida’s Amendment 4.

Before the passage of Amendment 4, “returned citizens,” as advocates of the amendment prefer to call former felons, had to go through a long and arduous clemency board application process, with the governor sitting at the head. The number of approvals ebbed and flowed depending on whether Democrats or Republicans were heading the board.

Amendment 4 was approved with over 65% of the vote and automatically restored the right to vote to approximately 1.4 million former felons in Florida. But it almost immediately faced hurdles from the newly elected Republican Governor Ron DeSantis. After a series of revisions pushed through by Republican lawmakers, the amendment was effectively gutted, with new rules requiring former felons to pay off all their fines, court fees and restoration to victims before being eligible to vote.

“I am pleased that ‘Florida Courts’ confirms that amendment 4 requires fines, fees & restitution be paid to victims before their voting rights may be restored. Voting is a privilege that should not be taken lightly,” DeSantis tweeted earlier this year.

It marked a major blow to the historic expansion of voting rights — advocates called it the equivalent of a “poll tax,” and argued Republicans feared the re-enfranchised 1.4 million former felons might be the key to a Democratic victory in the crucial swing state this November.

The billionaire and former Democratic candidate Michael Bloomberg even put his money into the mix, raising $16 million to help pay the fines and fees of those former felons wishing to register. The money was channeled through the Florida Rights Restoration Coalition, a nonpartisan voter-rights organization headed by Desmond Meade, who as a former felon himself led the charge for Amendment 4’s passage.

But the push to register those hundreds of thousands of former felons hasn’t fully met expectations. Georgetown University associate professor of law Neel Sukhatme and his team collected data on 850,000 former felons in Florida, and found that only about 45,000 have registered to vote since the passage of Amendment 4 in 2018.

He co-founded a nonpartisan, nonprofit website called “Free our vote,” which helps former felons in Florida decipher if they owe any fees, and if so how much.

“Folks are not registering in the numbers we would expect,” Sukhatme told CBS News. “I think part of it is that there’s this legal uncertainty that’s been created by this SB 7066,” the legislation enacted by the state of Florida to require the payment of all fines, fees, and restitutions prior to registering to vote.

“It’s chilling the right to vote because folks are just kind of getting scared,” said Sukhatme.

However, the new legislation did not prevent Gray and Hudnell from registering. Both quietly slipped away from the gathered group — anxious but proud — and walked into the polling place to cast their first vote for a United States president.

“The feeling I felt was breathtaking,” said Gray. “It was amazing. When I put that pen to the paper, I finally got a voice. I finally did it. It’s finally official — I am a resident of this country.”

Randy Hudnell celebrating as he voted for the first time in the 2020 election.