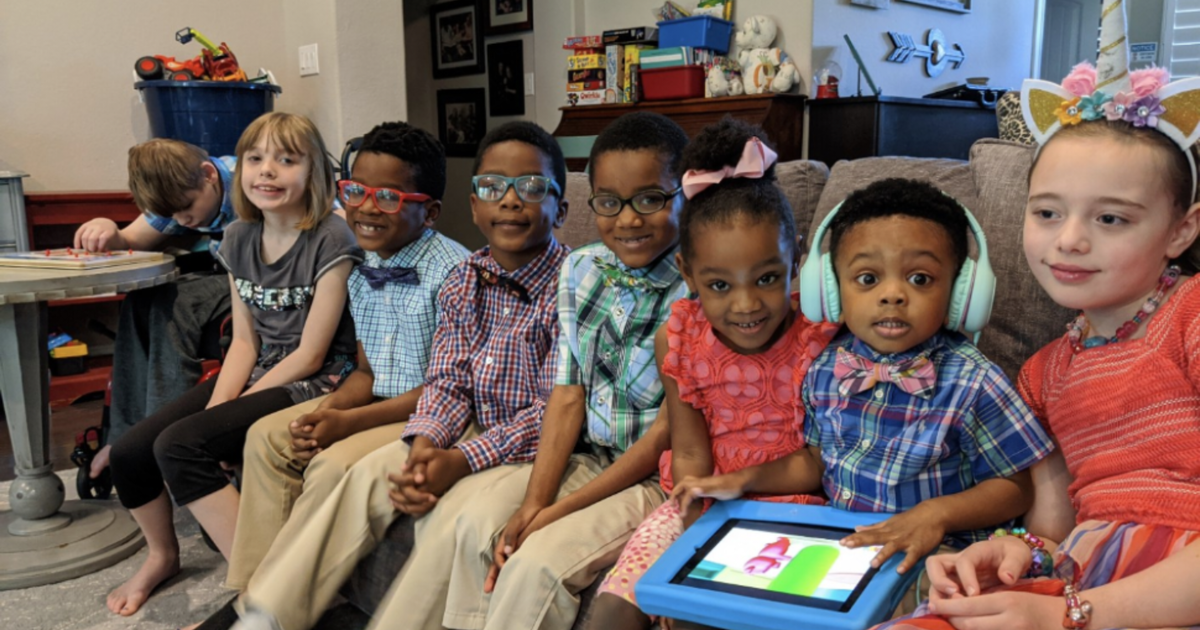 Five siblings adopted together out of foster care

Eleven years ago, Andi Bonura was told she wouldn’t be able to have any more children. Now, she has eight — three biological children and five adopted siblings, who were separated in foster care for about two years until Bonura and her husband, Thomas, welcomed them into their family.

The couple’s eldest son, Joey, was born with a twin who died at about 5 months old. “When we lost Eli, we were told we couldn’t have any more children, and we were devastated,” Bonura told CBS News on Monday. “And we actually started looking at adoption then, but for some amazing reason, we had two more daughters that were a complete shock.”

After welcoming daughters Sadie and Daphne, doctors advised her not to get pregnant again. The Bonuras wanted a big family, and decided to became licensed foster parents. They fostered two babies who each eventually went back to their biological families.

“Then they told us to come pick up our now 2-year-old Bryson,” Bonura said. Bryson joined the family immediately after leaving the NICU when he was born. “We didn’t think we would have him forever or anything. We were there to love him for now. But we found out he had siblings,” she said.

Eventually, the Bonura family got to meet Bryson’s four siblings, who soon got split up into separate foster homes. When Andi Bonura found out about that, she asked if she could foster at least some of the siblings, and got approved.

Andi Bonura was once told she couldn’t have any more children — now she has eight. Bonura had three biological kids and recently adopted five siblings who were separated in foster care.

“We still weren’t thinking we were going to have them forever. We were just happy they were together,” she said.

Shortly after they started fostering three of the siblings, the Bonuras got the call that all five children would be put up for adoption. “We had already been meeting with the twins, who are now 8, and we just loved them. They were constantly asking when they were going to move into our house,” she said.

Soon, the twins’ dream of moving in with the Bonura family became a reality. The couple began fostering all five siblings and started the adoption process. This May, after about two years, the adoption was finalized.

“We were so excited. We wanted them absolutely from the get-go,” Bonura said. The couple is now parents to 8-year-old twins Thomas and Carter, 6-year-old David, 4-year-old Gabrielle and 2-year-old Bryson.

Bonura said she expected the adoption to be delayed since some courts were closed due to the coronavirus. But to her surprise, the couple was granted an adoption hearing over Zoom. “It was really easy and it was nice because we were in our home,” she said.

A neighbor planned a car parade to help the family of 10 celebrate their new additions while practicing social distancing.

The neighborhood helped the Bonura family celebrate the finalization of the adoptions by holding a car parade.

Bonura said the adoption process is an “emotionally challenging experience,” but “bringing these kids into a happy, safe home and giving these kids another opportunity,” is fulfilling.

With eight kids, she may seem like a supermom, but Bonura said other women also deserve credit. “The only reason I made it through all of this is because of the other foster moms and the support we have for each other,” she said. “Honestly, I’m nothing special. If anything, it’s the other moms who encouraged me.”

Bonura said if adoption or fostering isn’t in the cards, people can still help foster kids by supporting their families. “These kids are just the most beautiful, amazing kids and it’s not their fault. None of this is their fault,” she said. “So, I just hope maybe more people will see the beauty in this and maybe find a way to get involved, even if it’s just support, or being a babysitter for a foster mom, or anything.”

While it’s not easy to raise a sixth grader, fifth grader, third grader, two second graders, a first grader and a preschooler, Bonura said lockdown has been a blast. “This lockdown has been such a great bonding opportunity for us. We did the homeschooling together and then we would play football and basketball and games … it’s been so great to have that extra time to bond,” she said.

Read More: Five siblings adopted together out of foster care