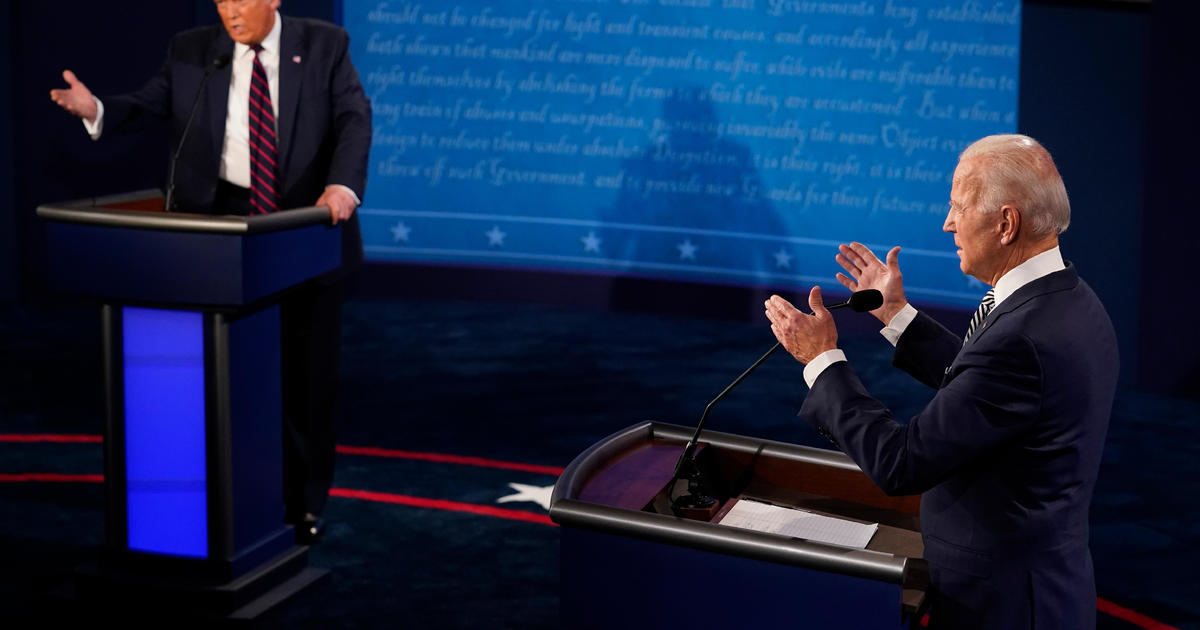 During their first debate, President Trump and Joe Biden made a number of claims — CBS News’ fact-checking team examined the truth of some of those claims.

Trump fact check: Obama had the “slowest recovery” since 1929

While economists have pointed out that the economy was unusually slow to snap back after the downturn of 2008-2009, Mr. Trump is wrong when he says it was the slowest recovery since the Great Depression of 1929.

Six years after the 2001 recession ended, the number of jobs had grown by just 6%, compared with 8% six years after the economic collapse of the Great Recession. The recovery that started during Mr. Obama’s presidency was also longer than the 2001 recovery as well. The U.S. economy added 2.3 million jobs in the last year of the Obama administration.

Mr. Trump said that the corporate tax cuts that were passed in late 2017 created a huge uptick in jobs. In fact, 2.3 million jobs were created in the year following the tax cuts, roughly the same as during the last year of Mr. Obama’s presidency, and only 200,000 more than the year before the tax cuts. In the second year after the tax cuts passed by Republicans and signed by Mr. Trump, job growth dropped by 180,000.

Biden fact check: “There is 100 million people who have pre-existing conditions”

In 2017, the Department of Health and Human Services released a study which found that 23% to 51% of non-elderly Americans (those under age 65) — or 61 million to 133 million people — have pre-existing health conditions.

Trump fact check: He claims he banned travelers from China early and that Biden called his ban “xenophobic”

TRUMP STATEMENT: “You (to Biden) don’t think we should’ve closed our country because you thought it was too– it was terrible. You wouldn’t have closed it for another two months.”

CLAIM: President Trump says that he banned travelers from China early on during the pandemic, and that Biden called that ban “xenophobic” and “racist.” FACT CHECK: Inconclusive: Mr. Trump’s decision to “close our country” wasn’t as strict as he claims, and while Biden criticized it, he did not use the terms Trump accused him of using. THE DETAILS: President Trump’s “ban” on travelers from China wasn’t a full ban — it allowed travel from China’s Hong Kong and Macao territories. Largely in line with restrictions other countries around the world were implementing at the time, the limitations on travel took effect February 2, after the virus was already widely prevalent in China, according to the Associated Press. After Mr. Trump’s restrictions took effect, the New York Times reported that 40,000 Americans and other authorized travelers made the trip from China to the U.S. The AP reported that more than 8,000 Chinese and foreign nationals also entered the country after the restrictions were put in place. While scientists and experts have praised the travel restrictions, there is little evidence to support the claim that it saved the large number of lives Trump has repeatedly stated. As for Mr. Trump’s claim about Biden, during an Iowa campaign appearance on the same day the travel restrictions were announced, Biden criticized the Trump administration’s handling of the pandemic. “This is no time for Donald Trump’s record of hysteria and xenophobia — hysterical xenophobia — and fearmongering to lead the way instead of science,” Biden said. He did not directly tie this statement to the president’s recently announced travel restrictions, and the campaign claims he was not directly referring to the China travel ban. Biden also repeatedly accused the president of xenophobia on Twitter. Eventually, in April 2020, the campaign said Biden supported the ban. “Science supported this ban, therefore he did too,” said deputy campaign manager Kate Bedingfield. BY: Adam Aigner-Treworgy

CLAIM: Young children aren’t “vulnerable” to COVID. FACT CHECK: Misleading THE DETAILS: While data does show that young children are less likely to contract COVID-19 than adults, it is not true that children have not been affected. It is also not true that children are incapable of spreading the virus. Data from the American Academy of Pediatrics reports that as of September 24, children represented only 10.5% of all cases in states reporting cases by age. The AAP also says “available data indicated that COVID-19-associated hospitalization and death is uncommon in children” and that “it appears that severe illness due to COVID-19 is rare among children.”However, the AAP also reports that over 624,000 children have tested positive for COVID-19 since the onset of the pandemic. Recent Centers for Disease Control data show that children younger than 10 are capable of transmitting COVID but specifies that teenagers have been twice as likely to contract the virus as elementary school age children. Although Mr. Trump regularly asserts that children are largely unaffected by COVID-19, he told journalist Bob Woodward in March that “plenty of young people” were affected by the pandemic. It’s not clear exactly what age group Trump was referring to, however.

Bottom line: The CDC and most experts acknowledge that the effect of COVID on young children is still unclear, and that initial data shows relatively low infection rates, but to say young children “aren’t” vulnerable to the disease is false.