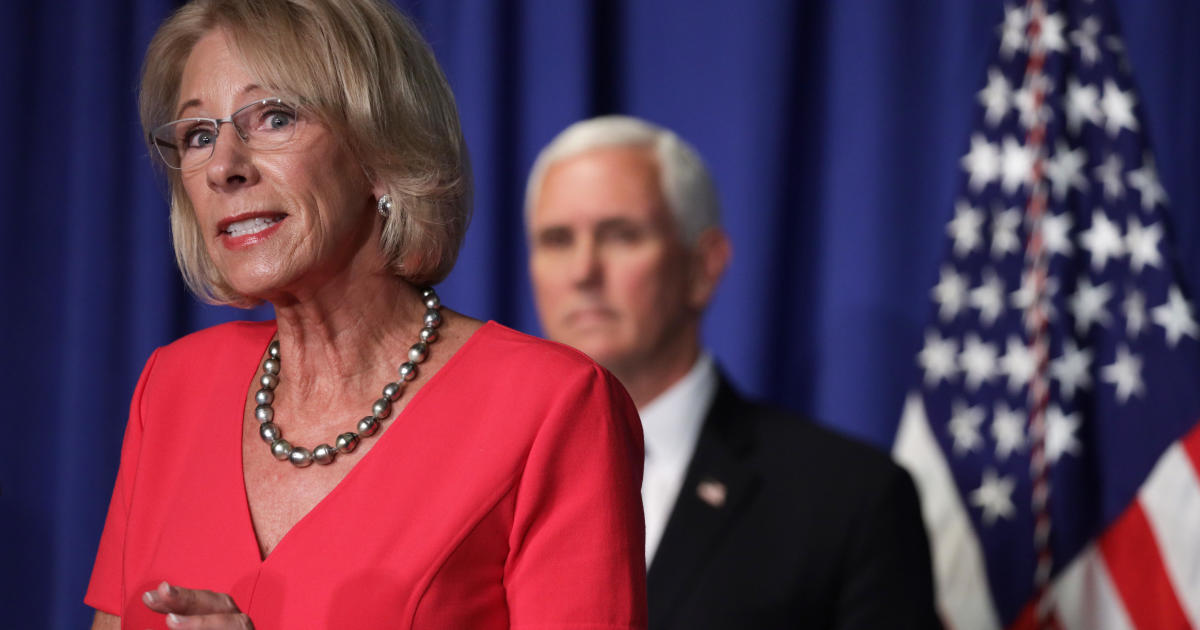 Washington — A federal judge on Wednesday allowed the Education Department to move forward with new rules governing how schools and universities respond to complaints of sexual assault.

The rules, which take effect Friday, expand the rights of the accused, narrow the definition of sexual harassment and reduce the scope of cases that schools are required to investigate, among other changes.

In a suit challenging the rules, attorneys general from 17 states and the District of Columbia argued that the policy would block schools from investigating certain sexual abuse complaints and would discourage students from reporting assaults.

“As a result, fewer sexual harassment complaints will be filed, and schools will be less well equipped to protect their students’ safety and rid their programs and activities of the pernicious effects of sex discrimination,” the suit said.

“Plaintiffs are free to investigate and punish as violations of their codes of conduct or of state law behavior that does not meet the new definition of sexual harassment under the Final Rule,” Nichols wrote.

He also turned aside an argument that the rules would bring heavy costs for schools and limit their ability to respond to the coronavirus pandemic.

“The Court recognizes the obvious seriousness of the COVID-19 pandemic,” he wrote. “In fact, for these and other reasons, a later effective date might have been a preferable policy decision.”

Still, he said, the Education Department took the pandemic into account when it issued the new rules, and schools have long known that a new policy would be coming.

Education Secretary Betsy DeVos said the ruling is “yet another victory for students and reaffirms that students’ rights under Title IX go hand in hand with basic American principles of fairness and due process.”

DeVos issued her policy May 6 after rescinding earlier guidelines from the Obama administration in 2017. Victims’ advocates say the 2017 rules forced colleges to confront sexual abuse after ignoring it for years. But DeVos has said the guidelines turned campus disciplinary panels into “kangaroo courts” that were too quick to punish accused students.

DeVos’ rules, which carry the weight of law, tell schools how to implement Title IX, the 1972 law barring discrimination based on sex in education.

Under her overhaul, the definition of sexual harassment is narrowed to “unwelcome conduct determined by a reasonable person to be so severe, pervasive, and objectively offensive” that it denies a person access to a school’s education programs or activity.

The policy will now require colleges to investigate claims only if they’re reported to certain officials, and schools can be held accountable for mishandling complaints only if they acted with “deliberate indifference.” Opponents also took exception with a provision allowing students to question one another through representatives at live hearings.

DeVos on Wednesday said the rules require schools to “to act in meaningful ways to support survivors of sexual misconduct without sacrificing important safeguards to protect free speech and provide all students with a transparent, reliable process.”

The case challenging the rules was led by attorneys general in Pennsylvania, New Jersey and California, with backing from a total of 17 states and the District of Columbia.

“We’re disappointed that the court denied our motion to stay the new Title IX rule while our litigation is pending,” Pennsylvania Attorney General Josh Shapiro said. “But our commitment to the right of every Pennsylvania student to safe and equitable education has not wavered, and our challenge to Secretary DeVos’s unlawful rule is not over, this is merely the first step in a long process.”

The challenge was supported by the American Council on Education, an association of university presidents, along with 24 other higher education organizations. In a June legal brief, the groups said the policy ordered a “sea change” for colleges but gave them less than three months to implement it.

“In the best of times, that deadline would be unreasonable. But in light of the extraordinary burdens that have been placed on American colleges and universities in the wake of the COVID-19 global pandemic, that August 14 implementation deadline is problematic in the extreme,” the groups wrote.