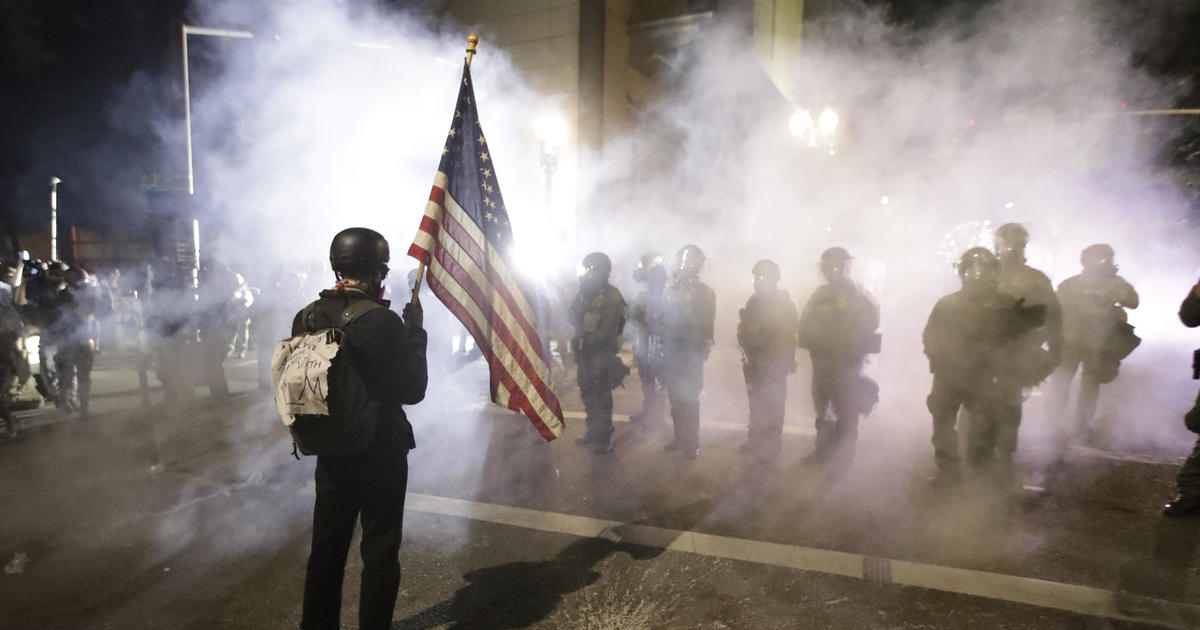 It was the 62nd night in a row of protests there.

Governor Kate Brown said early Wednesday that all Customs and Border Protection & ICE agents would depart Portland and be replaced by Oregon State Police beginning Thursday. But acting Department of Homeland Security Secretary Chad Wolf said the agents would stay put “until we are assured that the Hatfield Federal Courthouse and other federal properties will no longer be attacked.”

Federal agents issued their first warning of the night shortly before 11 p.m., cautioning people to leave the fence around the courthouse alone or face potential arrest. A few minutes later, they started deploying tear gas and crowd control munitions.

Some people could be seen climbing over the fence and climbing back out at about 11:30 p.m. Federal agents fired another round of tear gas and stun grenades but a large crowd remained crushed against the fence, undeterred.

A demonstrator waves a U.S. flags in front of federal agents after tear gas is deployed during a Black Lives Matter protest at the Mark O. Hatfield United States Courthouse early on July 30, 2020, in Portland, Oregon.

Federal officials declared an unlawful assembly at about 11:40 p.m. and asked “peaceful protesters” to leave the area.

At one point, some protesters holding American flags and veterans with signs met face-to-face in a silent standoff with federal agents.

Christine VanOsdol was one of the vets who refused to move as agents approached. She said she’s a U.S. Army Desert Storm veteran and doctor of occupational therapy.

“I’m out here to stand for the United States Constitution and for people’s right to free speech and to stand here and ask for better from our leaders,” she told KOIN. “This breaks my heart.”

At around 1 a.m., a man from Seattle took at least two less lethal rounds to the legs, at least one of which became embedded in his shin, KOIN reports.

By 2 a.m. only 100 or so people remained in the area near the courthouse. People in the crowd occasionally hopped the fence or threw things over it, prompting additional volleys of pepper balls from officers.

« Asian Americans report increased discrimination, even as some work on the front lines of pandemic