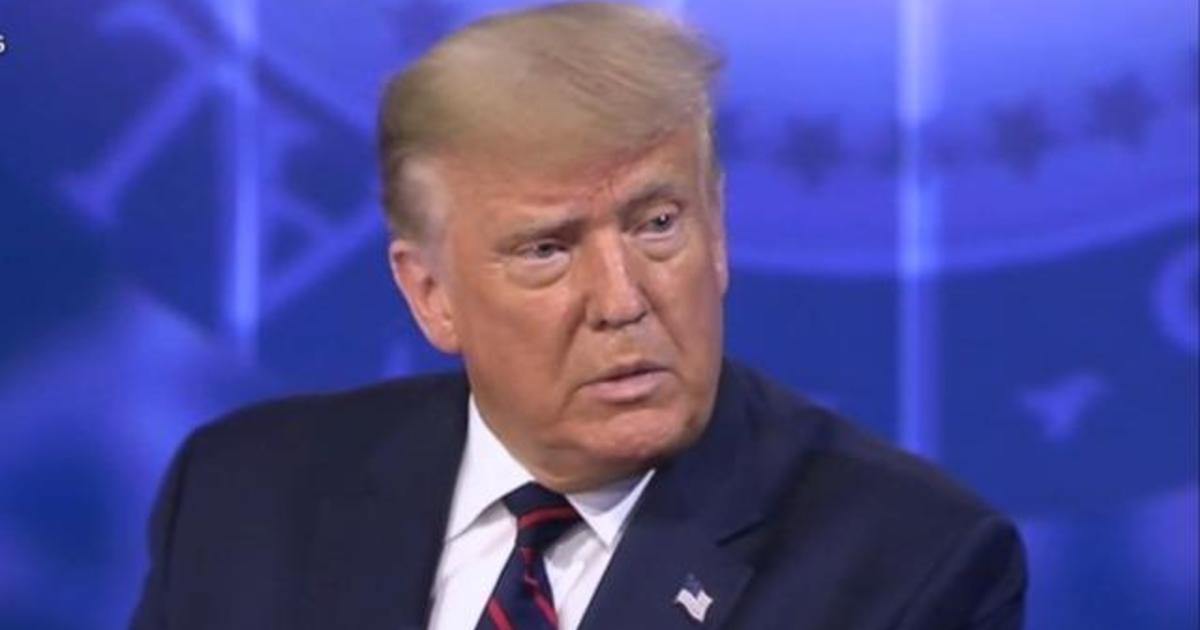 President Trump was in the spotlight Tuesday night for a rare town hall in Philadelphia with undecided voters, where he fielded questions on topics including the coronavirus pandemic and health care, which have been on the minds of many voters.

He made a variety of claims about the health care system, health care proposals and the scientific realities of COVID-19. Here are some of the highlights, as well as fact checking and context for his statements.

Trump says COVID-19 will go away without a vaccine

Mr. Trump repeated a claim Tuesday night he has made in the past — that COVID-19 is “probably going to go away now a lot faster because of the vaccine” but “would go away without the vaccine.”

When ABC News moderator George Stephanopoulos asked the president to clarify if he believes the virus will go away without a vaccine, Mr. Trump responded, “Sure, over a period of time.”

Mr. Trump said in February that the 15 coronavirus cases in the U.S. would soon be “zero.” He’s also said repeatedly that the virus will eventually disappear, without citing evidence.

But public medical experts think this strain of coronavirus may be here to stay.

“Absent a vaccine, I think it would quite likely become like seasonal flu or perhaps like some of the other coronaviruses that we are familiar with,” Bill Hanage, an associate professor of epidemiology at Harvard University’s School of Public Health, told USA Today earlier this year. “It is entirely plausible that this could become part of our regular landscape of respiratory viraI infections.”

Mr. Trump, who has not followed through on a pledge in July that he would have a health care plan ready and signed in two weeks, said his administration would not get rid of the preexisting conditions coverage that were implemented by the Affordable Care Act. He was responding to Ellesia Blaque, an assistant professor who lives in Philadelphia, who told him she’s paying $7,000 a year for life-saving medicine because of a condition she was born with, sarcoidosis.

“That disease started in my skin, moved to my eyes, into my optic nerves, and when I went to graduate school, into my brain,” she said.

“I want to know what it is that you’re going to do assure that people like me who work hard, we do everything we’re supposed to do, can stay insured,” she asked Mr. Trump.

But while the president has claimed he would protect preexisting conditions, his administration has been trying to kill the Affordable Care Act in the courts.

In June, the Trump administration asked the Supreme Court to overturn Obamacare, arguing the individual mandate is unconstitutional and so, the rest of the law, which includes preexisting condition protections, should be struck down.

While he said he has the plan “already,” Stephanopoulos noted that Mr. Trump has been in office for 3 1/2 years and has not yet presented a plan to replace Obamacare.

Mr. Trump said this summer that he was working on an executive order to protect those with preexisting conditions.

It’s still unclear when that health care plan, which Mr. Trump said would be signed weeks ago, will be released. White House chief of staff Mark Meadows said the plan has a legislative component and an executive action component.

“And you’ll develop — you’ll develop herd — like a herd mentality — it’s going to be herd developed — and that’s going to happen,” the president said Tuesday night. “That will all happen. But with a vaccine I think it will go away very quickly. But I really believe we’re rounding the corner. And I believe that strongly.”

Stephanopoulos pointed out that Dr. Anthony Fauci disagrees with this, but Mr. Trump insisted other doctors like Scott Atlas agree with him.

The reality of a herd immunity, which appears to be what the president meant by “herd mentality,” is not so clear. The scant scientific research the world has so far suggests antibodies only last several months after infection, which seem to make it possible to be reinfected.

Trump claims he “up played” COVID-19

The president claimed he in fact “up-played” COVID-19, after telling Washington Post journalist Bob Woodward he “always wanted to play it down.”

“I didn’t downplay it. I actually in many ways up-played it in action,” the president told the voter who asked him why he would “downplay a pandemic that is known to disproportionately harm low-income families and minority communities.”

The president has long cited his move to restrict travel from China as one of those actions. But the president was also slower on other needed measures.

For weeks, reporters pressed him on using the Defense Production Act to ramp up production of much-needed medical supplies before the president took action. He also claimed the virus would go from 15 cases down to “zero” quickly, and has insisted that the virus will eventually disappear. He has also been slow to embrace social distancing measures and practices like wearing a mask that scientists have encouraged to arrest the spread of COVID-19.

Trump says there are a “lot of people” who think that “masks are not good.”

Mr. Trump, who typically forgoes wearing a mask himself, said there are a “lot of people” who think that “masks are not good.” A voter had asked why he doesn’t wear a mask more often himself and why he hasn’t imposed a national mask mandate.

Asked who those people are, the president responded that masks aren’t good for “waiters.”

But mask-wearing has proven to decrease the likelihood of transmission of COVID-19. Centers for Disease Control Director Robert Redfield went as far to suggest in congressional testimony Wednesday that masks might be more effective in fighting the virus than a vaccine for some Americans.

The CDC says masks are “most likely to reduce the spread of COVID-19 when they are widely used by people in public settings.”

“I might even go so far as to say that this face mask is more guaranteed to protect me against COVID than when I take a COVID vaccine,” Redfield said Wednesday. “… If I don’t get an immune response, the vaccine’s not going to protect me. This face mask will.”

Mr. Trump also said Tuesday night that Biden has agreed to a Bernie Sanders-style health care plan. “If you look at what they (Democrats) want to do, where they have socialized medicine, they will get rid of pre-existing conditions.”

While Biden and Sanders did release a platform to ensure “universal health care,” it is not Sanders’ “Medicare for All” plan. The platform recommends an affordable and government-run public option health care plan to be made available through the Obamacare exchanges.

Biden’s own proposal calls for building on the Affordable Care Act and for increasing the value of tax credits to lower premiums for Americans. Biden’s plan would also offer coverage premium-free to individuals who would qualify under Medicaid expansion, but whose states have chosen not to expand Medicaid.

BET noted that the uncommitted African Americans who asked Mr. Trump questions at the Philadelphia town hall did not seem convinced by his answers on a range of topics from health care to inequality. Blaque, the voter suffering from sarcoidosis, told CNN later that the president did not answer her question, and she’s now decided who’s getting her vote.

“I’m going to vote for Biden,” she said.

« More than 163,000 businesses on Yelp have closed since March