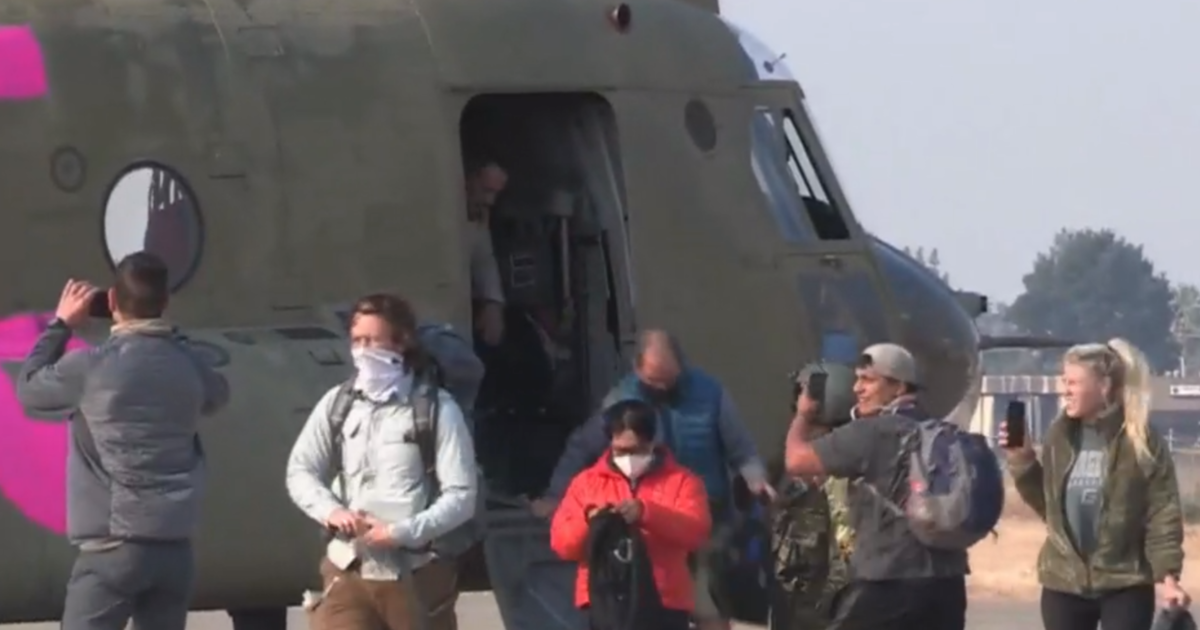 Several military helicopters were used Tuesday to rescue more than 100 people from the massive Creek Fire burning in central California.

Officials are calling the fire an “unprecedented disaster” as flames spiral in all directions of the Sierra National Forest. The blaze has scorched nearly 144,000 acres and remains at 0% containment, according to the California Department of Forestry and Fire Protection, also known as Cal Fire.

Early Tuesday, the California National Guard announced crews airlifted 35 people on three separate rescue flights, followed by more missions, CBS San Francisco reported. Officials said they made a total of eight trips and rescued 120 people. Many of them were trapped and rescued overnight from multiple locations, including Edison Lake and China Peak, and taken to Fresno Yosemite International Airport, according to the Fresno Bee.

People rescued from the Creek Fire are seen in Fresno, California, on Tuesday, September 8, 2020.

CBS News spoke with Mary Breckenridge, whose son, John, was aboard a Chinook helicopter. Three days of anxiety and despair melted away as her son and his dog, Banner, were safely rescued and taken to Fresno.

“You know, my cabin is probably on fire, our cabin, but this is what’s important,” said Breckenridge, moments before Banner ran up to her for a heartfelt reunion.

This comes after an effort Monday night to rescue dozens of people sheltering in place was unsuccessful. A military helicopter tried, but failed to land to remove people trapped by the fire, the Fresno Fire Department tweeted.

On Saturday, more than 200 people were airlifted to safety after flames trapped them in a wooded camping area near Mammoth Pool Reservoir. Two people were seriously injured and were among 12 hospitalized.

Since the Creek Fire started Friday evening, it has destroyed more than 80 structures, including 60 homes, according to Cal Fire. Low humidity and high winds were adding to the difficulty of battling the raging flames. Forecasters said wind gusts up to 50 mph are expected in the fire’s vicinity through Tuesday night. The National Weather Service said a Red Flag warning issued for the area will remain in effect through Wednesday night.