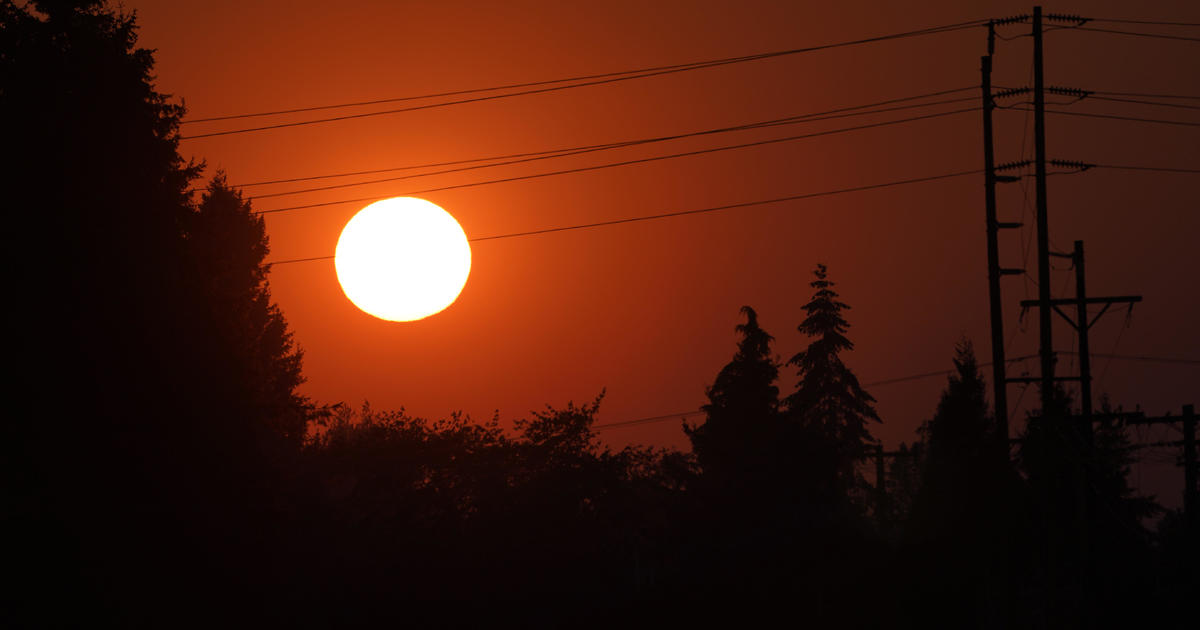 Nearly 100 major fires continue raging in almost a dozen Western states, claiming lives and wiping out towns in Oregon and Washington. Meanwhile, wildfires in California are turning skies eerily orange and brown as firefighters work to snuff out the flames.

On Tuesday, Oregon Governor Kate Brown called the fast spread of wildfires across the state a “once in a generation event” and urged residents to remain cautious, CBS affiliate KOIN-TV reports.

“This could be the greatest loss of property and life in our state history,” said Brown.

Fierce winds have fueled the flames, which have leveled five communities. In northern Oregon, a 12-year-old boy and his grandmother died in a wildfire near Lyons, KOIN-TV reported. Volunteers had been searching for the boy since he ran from his home on Tuesday as the Santiam Canyon wildfire approached, according to the report.

The fires have been moving so fast that some, like Adamma Dye, had no way out except to drive through flames.

“It was pretty terrifying,” said Dye. “Just the adrenaline was keeping us going.”

The destruction includes a nursing home in the devastated town of Phoenix, Oregon, where 89-year-old Beth Hill barely escaped, leaving behind a lifetime of memories.

“Everything I owned. All my pictures of my husband and me, scrapbooks and Johnny Cash tapes,” said Hill.

The Holiday Farm fire is seen burning in the mountains around McKenzie Bridge, Oregon on September 9, 2020. – Hundreds of homes including entire communities were razed by wildfires in the western United States on September 9 as officials warned of potential mass deaths under apocalyptic orange skies. At least five towns were “substantially destroyed” in Oregon as widespread evacuations took place across the northwestern state, governor Kate Brown said. (Photo by Tyee Burwell / AFP) (Photo by TYEE BURWELL/AFP via Getty Images)

In Okanogan County, Washington, search-and-rescue crews found a 1-year-old boy dead and his parents severely burned near the Cold Springs Fire, CBS affiliate KREM-TV reports. Authorities believe the family was attempting to escape the flames before being found along a river bank. The child’s parents were taken to a hospital and were last listed in critical condition, according to KREM.

Several wildfires continue to torch everything in their paths across California. One of the most active blazes is the Creek Fire, which started Friday evening near the central California town of Big Creek and has forced the rescue of hundreds of trapped people. The blaze has charred more than 163,000 acres and is still 0% percent contained as of Wednesday afternoon, according to the California Department of Forestry and Fire Protection, also known as Cal Fire.

Meanwhile, further north in Plumas National Forest, the Bear Fire exploded in size overnight to more than 250,000 acres, with containment estimated at about 38%, CBS San Francisco reports. The flames spread along Highway 162, setting homes ablaze in Bear Creek and prompting even more evacuations.

SAN FRANCISCO, CALIFORNIA – SEPTEMBER 09: An exterior view of the ballpark before the game between the San Francisco Giants and the Seattle Mariners at Oracle Park on September 09, 2020 in San Francisco, California. Smoke from various wildfires burning across Northern California has blanketed the city in an orange glow.

Several wildfires also continue to burn in Southern California. The Bobcat Fire has grown to more than 11,400 acres with no containment, according to the U.S. Forest Service. The flames sparked on Sunday in the Angeles National Forest near the city of Azusa.

The fire appeared to be flaring up on the ridges above the foothill communities, leaving many residents worried, CBS Los Angeles reported.

“It has the potential to come down the hill really, really quickly,” Monrovia resident Gerald Pool, who was watering down his property with a hose Wednesday, told CBS LA. “Last night it was two hilltops away, and now it’s only one hilltop away.”

A combination of hot and dry conditions, gusty winds and dry fuels are expected to make the battle against the fire even more difficult, officials said. A Red Flag warning is in effect for the area until Wednesday night.

California has yet to reach the peak of this year’s fire season — but the deadly wildfires across the state have already burned more acres than any year on record. According to Cal Fire, 2.2 million acres have burned so far, and the season is far from over.

Lilia Luciano contributed to this report.