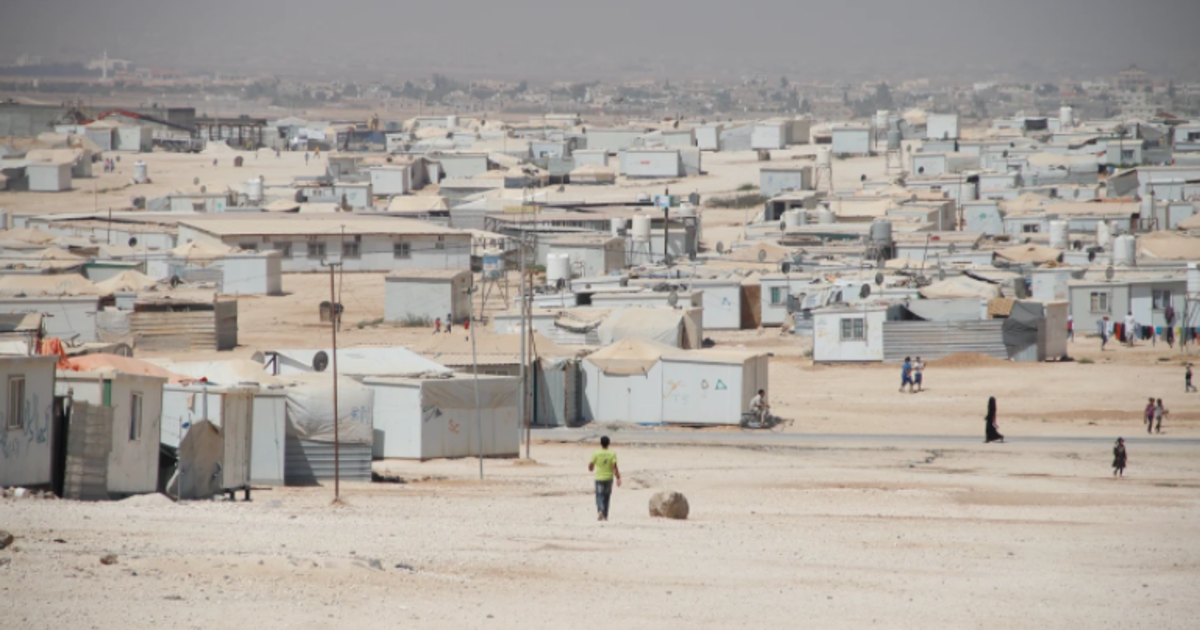 COVID creeps into a sprawling Syrian refugee camp in Jordan

Amman, Jordan — The coronavirus has crept into one of the biggest camps for Syrian refugees. One refugee and two Jordanian workers at the Zaatari camp have tested positive for COVID-19, the United Nations refugee agency UNHCR confirmed Thursday.

The agency said the infected workers were not UNHCR staff. Both were workers at a clinic in the camp.

“It was a surprise for us,” UNHCR representative Mohammed Al-Taher told CBS News, given the great efforts exerted on the ground at the Jordanian camp to avoid infections, including temperature checks for anyone entering and vehicle sterilization. “We are worried about the refugees. We need just to keep the camp very clean, and clear of COVID-19.”

His concern is warranted. Less than 10 miles from the Syrian border, the Zaatari camp is home to nearly 77,000 Syrian refugees who fled the grinding, nearly decade-long war in their country. The sprawling settlement of small white trailers in the desert has become an iconic symbol of the plight of Syria’s displaced people.

Trailers providing accommodation for some 77,000 Syrian refugees are seen at the Zaatari refugee camp in Jordan.

“We are talking about almost 77,000 refugees who live in an area of 5.3 square kilometers (2 square miles), which is really very dense, very crowded,” said Al-Taher. Those conditions make it challenging for UNHCR to prevent the spread of the virus in the camp, but it has intensified its awareness campaign, urging refugees to take precautions.

Knowing the risks at the camp, given the close quarters and challenges with sanitation in a tent city, the refugees and administrators at Zaatari have been on high alert since the pandemic started.

“Most people have stopped going out unless it is absolutely necessary,” refugee Ahmad Harb, 35, was quoted as saying in a UNHCR press release. “They are staying at home all day and night. Some have even put signs outside their doors that read ‘visits not allowed.'”

According to al-Taher, the virus was brought into the camp by a Jordanian physiotherapist with the Arabian Medical Rescue organization, who worked at a clinic in Zaatari. The physiotherapist is believed to have infected both the other aid worker at the clinic and the refugee who has tested positive.

Jordan has fought the spread of COVID-19 with relative success. Strict lockdown measures were imposed early on, helping to keep the number of infections low. New daily confirmed cases even fell to zero in July.

However, a few lapses at border crossings and the easing of lockdown measures have seen the number of new cases spike in recent weeks, and the disease is once again spreading around the kingdom. To date, Jordan has confirmed almost 2,800 coronavirus cases, and 20 deaths.

Many of those who work in the camp watched the resurgence of COVID-19 in Jordan, outside of Zaatari, with trepidation.

“The camp, in a way, is not isolated from what’s happening in the neighboring governorates and cities,” said Qasim Adeeb Qasim, site manager for the international aid group Oxfam.

To ensure the continuity of Oxfam’s work, Qassim said that as of Sunday his 45-person team at Zaatari would divide into two groups, working on different days to help ensure social distancing and minimize contact risks.

Staff members of the Oxfam charity meet at the Zaatari refugee camp for displaced Syrians in Jordan.

UNHCR said its team at the camp was following the Jordanian Ministry of Health’s established anti-virus protocols. The three confirmed cases have been isolated away from other camp residents and staff. The agency has also managed to trace, isolate, and test people known to have come into contact with the virus patients. COVID-19 test results were pending for those individuals, and UNHCR was closely monitoring the situation.

The national Health Ministry is in charge of coronavirus testing at the camp, and it has been carrying out random tests of refugees there for weeks, in addition to the targeted testing of close contacts of known cases.

“We are just praying, and we hope that all the cases on the random tests done in Zaatari camp will be negative and hopefully we will keep our refugees very clear and away from COVID-19,” the UNHCR spokesman told CBS News.

KUWTK: Kendall Jenner Explains Why She Ranked Kourtney Kardashian As The Worst Parent Out Of All Her Siblings! »