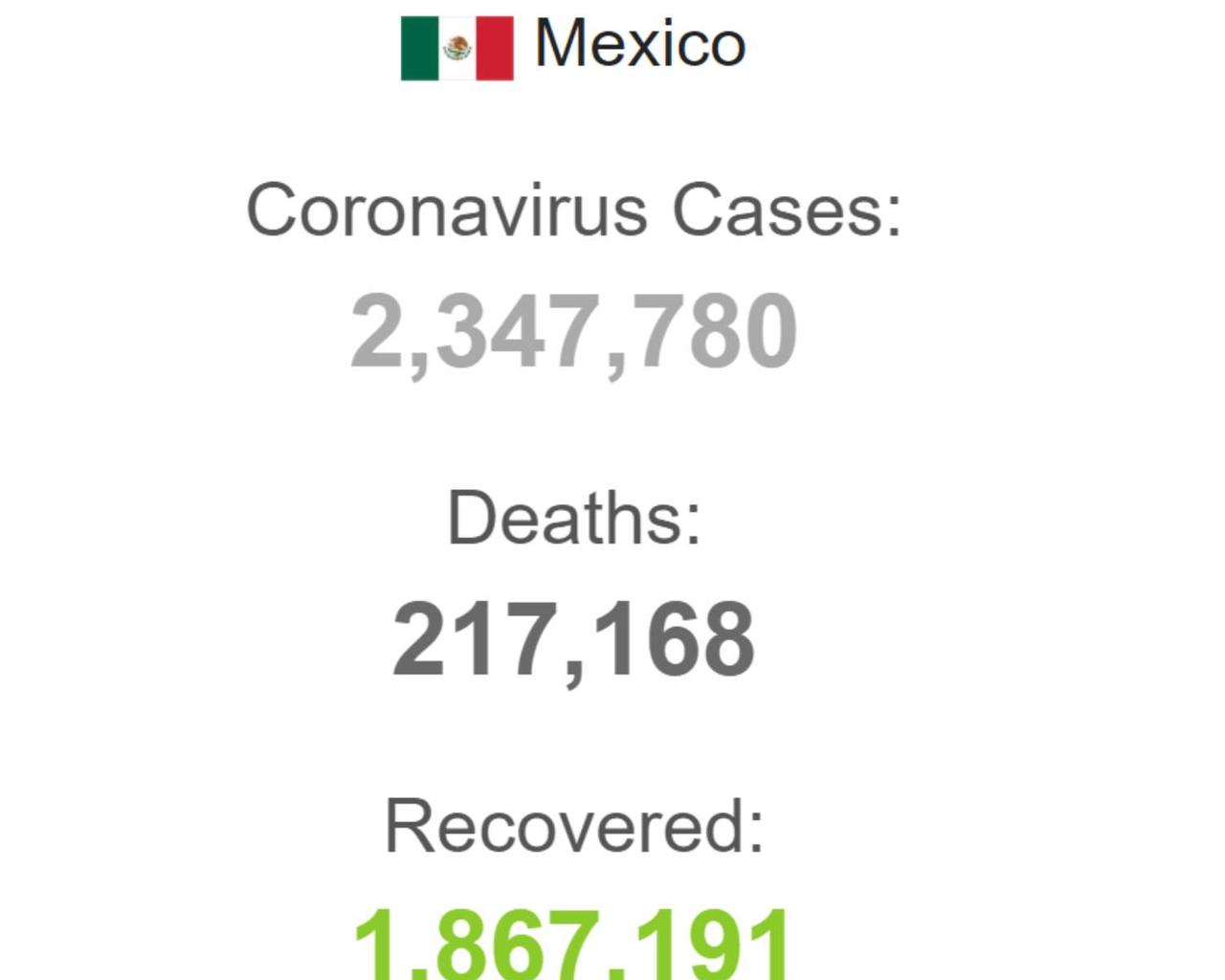 7,440,439 people are registered with a complete vaccination scheme against COVID-19.

Ricardo Cortés Alcalá, general director of Health Promotion, reported that this May 1, there are already 217,168 confirmed deaths in Mexico from the new coronavirus (COVID-19). In other words, in the last 24 hours, there were 261 deaths.

From the National Palace, he pointed out that Mexico City and the state of Mexico are among the institutions that are estimated to have the most active cases (with a starting date of the last 14 days due to the positivity index by the entity and epidemiological week). At the national level, 24,897 infections of this type are calculated.

In addition, there are hundreds of suspicious deaths that could add to the total in the next few hours. They also counted 1,867,191 recovered patients, and, on the other hand, 7,440,439 people with a complete vaccination scheme were registered.

According to the official, until this Friday, there is a -80% reduction in bed occupancy at the national level (both general care and with a ventilator) since the last peak of cases. Regarding general hospital beds, he explained that there are 12% of occupied spaces in the country. No state has between 30% and 49% occupancy.

In the case of beds with mechanical ventilation equipment used for severe COVID-19 patients, he pointed out that there is a national occupancy of 16% (with a downward trend) and that only two entities (Chihuahua and Tabasco) have between 30 and 49% occupancy.

Similarly, 30 companies have less than a 30% stake. In other words, of the 10,552 total beds, there are 8,871 beds available and 1,681 beds occupied. It should be noted that COVID-19 estimates and dynamics have been steadily declining for several weeks.

It states that 977 and 808,028 of the first dose of immunizations have been applied to the security personnel. Likewise, 10,674,182 antigens have been injected into older adults; of them, 5,801,390 have the complete immunization schedule.

23,678 (0.1%) of the doses that have reached Mexico have been lost. Vaccination schemes also consider these harms before infectious diseases. This phenomenon was recorded due to the complications associated with their transfer.

On the other hand, it was recorded that 17,122 people have reacted to the vaccine (ESAVI) that was applied to them. However, only 288 are serious. Of these, 14,221 are related to Pfizer-BioNTech, 1,556 to AstraZeneca, 713 to SinoVac, 268 to Sputnik V, 351 to CanSino, nine are unknown, and four occurred abroad. According to the agency, there are still 80 people hospitalized due to the response they had.

It should be remembered that this past Friday, the Federal Commission for the Protection against Sanitary Risks ( Cofepris ), released a new batch with 502,630 doses of the CanSino vaccine that is packaged in the plant of the Mexican laboratory Drugmex, which is located in the state of Querétaro.

On the other hand, in Mexico City, vaccination of people aged 50 to 59 years will begin in four municipalities.

Read More: Coronavirus in Mexico as of May 1: 261 deaths in the last 24 hours

Pandemic-ravaged restaurants can soon tap a $29B grant program »