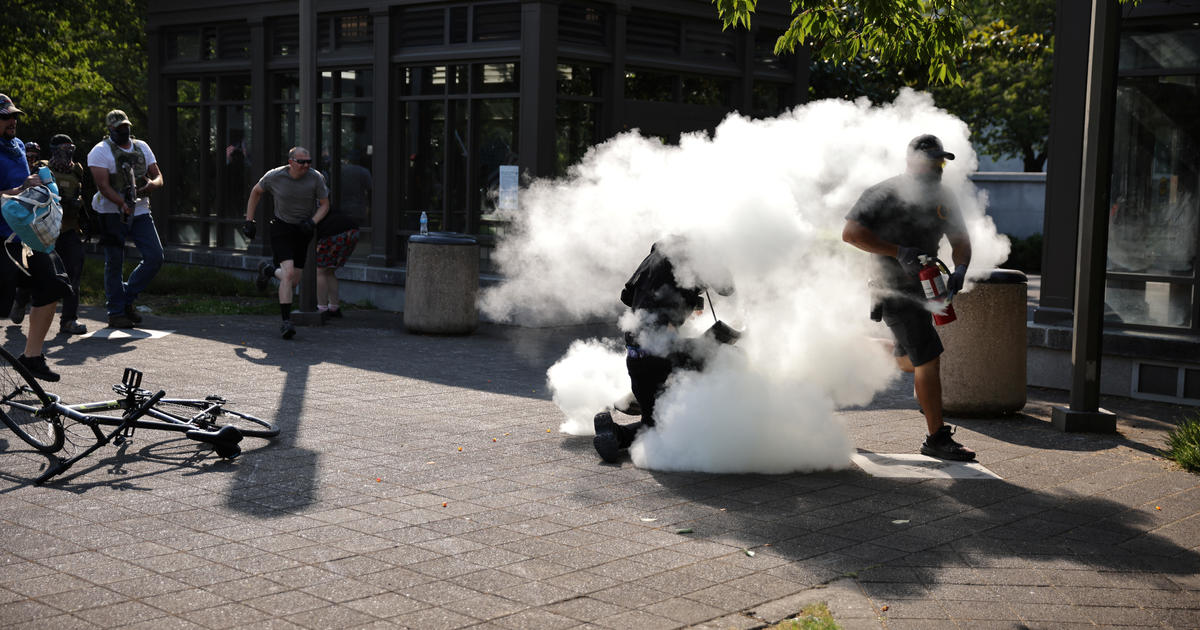 Clashes at one of two pro-Trump rallies in Oregon

Hundreds of people gathered Monday afternoon in a small town south of Portland for a vehicle rally for President Trump, just over a week after member of a far-right group was fatally shot after a Trump caravan went through the city. Later Monday, Trump supporters and counter-protesters clashed at Oregon’s Capitol.

Vehicles waving flags for Mr. Trump, the QAnon conspiracy theory and in support of police gathered at about noon at Clackamas Community College in Oregon City.

Attendee Keith Diffenderffer told CBS Portland affiliate KOIN-TV, “We have to stand up for America because we are in control of it. If we take control of it and if we don’t, we have to accept what other people want.”

A smaller group of members of the right-wing group the Proud Boys went on to Salem, where a crowd of several dozen Trump supporters had gathered.

At one point Monday afternoon, the right-wing crowd rushed a smaller group of Black Lives Matters counter-demonstrators, firing paint-gun pellets at them. There were skirmishes, and the Black Lives Matter group dispersed shortly after local police arrived on the scene.

A supporter of President Trump uses a fire extinguisher during scuffles with Black Lives Matter activists outside the Oregon State Capitol building in Salem, Oregon, on September 7, 2020.

Organizers of the earlier vehicle rally said they didn’t plan to enter Multnomah County, where Portland is located. Oregon City is about 20 miles south of Portland.

“Teacher unions are part of the labor movement, and I feel like it’s really important for people who are members of a union to step up and say, ‘Our labor supports Black Lives Matter and we are ready to organize in support of systemic change,'” educator Joanne Shepard told the station.

On Aug. 29, Aaron “Jay” Danielson, a supporter of the right-wing group Patriot Prayer, was killed in Portland after a pro-Trump caravan went downtown. Trump supporters fired paint ball canisters at counter-demonstrators who tried to block their way.

Danielson’s suspected killer, Michael Forest Reinoehl, was fatally shot by police Thursday. Reinoehl was a supporter of antifa – shorthand for anti-fascists and an umbrella description for far-left-leaning militant groups.

Demonstrations in Portland started in late May after the police killing of George Floyd in Minneapolis and have continued for more than 100 days.

A fire started outside a police precinct on Portland’s north side resulted in about 15 arrests during protests Sunday night into Monday morning, police said.

Officials warned demonstrators against entering the precinct property, saying they would be trespassing and subject to arrest.

Shortly after arriving, the crowd began chanting, among other things, “burn it down,” police said. Some in the group lit a mattress on fire.

Most of those arrested were from Portland. Others were from San Francisco; Sacramento, California; Mesa, Arizona; and two from Vancouver, Washington.

Charges included interfering with an officer, resisting arrest, reckless burning and possession of a destructive device.

Read More: Clashes at one of two pro-Trump rallies in Oregon