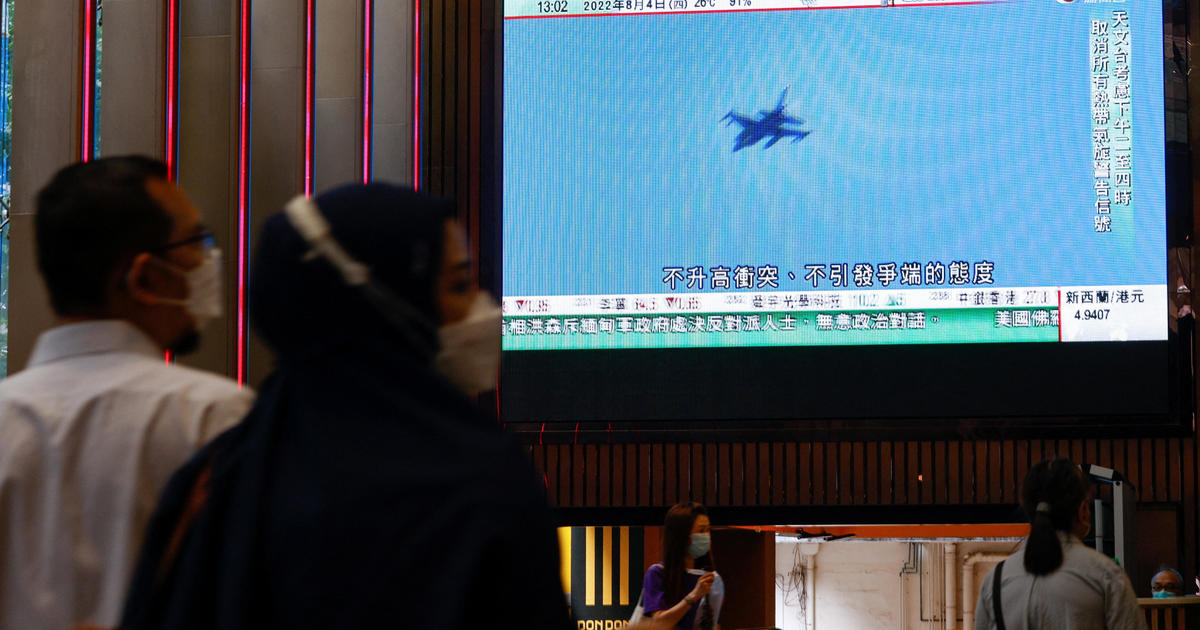 China fired ballistic missiles and deployed fighter jets and warships on Thursday as it began its largest-ever military exercises around Taiwan, a show of force sparked by U.S. House Speaker Nancy Pelosi’s visit to the island.

Pelosi was the highest-profile U.S. official to visit Taiwan in years, defying a series of stark threats from Beijing, which views the self-ruled island as its territory.

In retaliation, China launched a series of exercises in multiple zones around Taiwan, straddling some of the busiest shipping lanes in the world and at some points just 12 miles from the island’s shore.

The drills involved a “conventional missile firepower assault” in waters to the east of Taiwan, the Chinese military said.

The aim was to test the precision of the missiles and their ability to deny an enemy access to or control of an area, Eastern Theater Command spokesman Senior Colonel Shi Yi said in a statement.

A TV screen shows that China’s military started exercises including live firing on the waters and the airspace surrounding Taiwan, as reported by Chinese state television, in Hong Kong, China August 4, 2022.

Taipei didn’t say where the missiles landed or whether they flew over the island.

On the mainland, at what is said to be China’s closest point to Taiwan, AFP saw a batch of five military helicopters flying at a relatively low altitude near a popular tourist spot.

Reuters reported that its source said, “They flew in and then flew out, again and again. They continue to harass us.”

The drills will conclude at midday on Sunday, Beijing has said.

China’s nationalist state-run tabloid Global Times had said, citing military analysts, that the exercises were “unprecedented” and that missiles would fly over Taiwan for the first time.

Beijing has defended the drills as “necessary and just,” pinning the blame for the escalation on the United States and its allies.

A Chinese military source also told AFP the exercises would be staged “in preparation for actual combat”.

“If the Taiwanese forces come into contact with the PLA on purpose and accidentally fire a gun, the PLA will take stern countermeasures, and all the consequences will be borne by the Taiwanese side,” the source said.

The maneuvers are taking place along some of the busiest shipping routes on the planet, used to supply vital semiconductors and electronic equipment produced in East Asian factory hubs to global markets.

Taiwan’s Maritime and Port Bureau has issued warnings to ships to avoid the areas being used for the Chinese drills.

Taiwan’s 23 million people have long lived with the possibility of an invasion, but that threat has intensified under President Xi Jinping, China’s most assertive ruler in a generation.

Analysts said the Chinese leadership is eager to project strength ahead of a crucial ruling party meeting this autumn at which Xi is expected to be given an unprecedented third term.

“China’s announced military exercises represent a clear escalation from the existing baseline of Chinese military activities around Taiwan and from the last Taiwan Strait Crisis in 1995-1996,” said Amanda Hsiao, senior analyst for China at the International Crisis Group.

“Beijing is signaling that it rejects Taiwan’s sovereignty.”

Nevertheless, analysts have told AFP that China isn’t aiming to escalate the situation beyond its control — at least for now.

Titus Chen, an associate professor of political science at the National Sun Yat-Sen University in Taiwan, said: “The last thing Xi wants is an accidental war.”