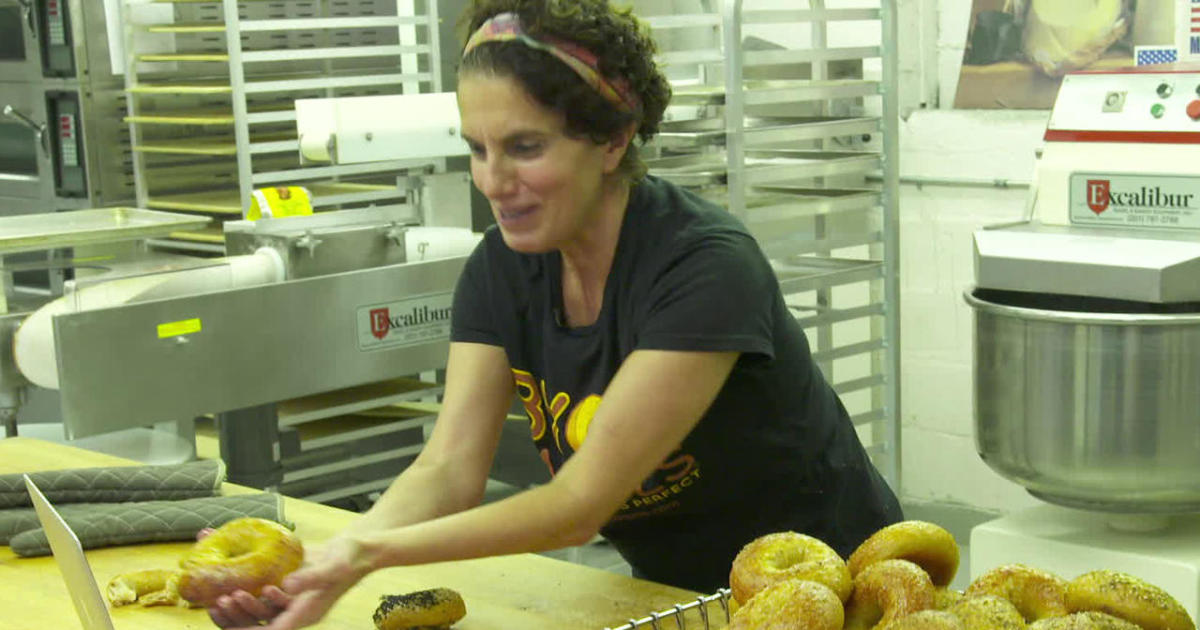 Breaking into the bagel business

It seems downright cruel that Beth George has to teach her clients to make bagels over Zoom right now, instead of in person. “I wish I could let you have a bite,” she told her students. “I feel guilty. They’re really good!”

With a client in Mexico? Bagels in India? Who knew that a woman in Rwanda might want to open a bagel shop?

A client in Mexico gets a lesson in bagel-making via Zoom from Beth George of BYOB Bagels.

The acronym can spell a lot: “Be Your Own Boss Bagels,” said George. “It’s also, ‘Bake Your Own Bagels’ Bagels, and Build Your Own Business.”

Bagels were brought to the U.S. by Eastern European Jews in the 19th century. How did a Lebanese-Christian end up one of the world’s few go-to bagel experts?

Because of her son, Spencer. As a kid, he was diagnosed with serious food allergies. “And when I realized that Spencer could not eat regular wheat anymore, I said to him, ‘What do you miss the most?’ And he said, ‘Bagels,'” said George. “Tada! That’s a bagel moment, OK?”

George taught herself how to make bagels out of spelt, an ancient relative of wheat that Spencer could eat, and went into business, joining forces with Frank Mauro, who sells bagel and bakery equipment. He convinced her to stop making spelt bagels and start teaching people how to make the perfect New York-style bagel.

“We like our bagels in New York crispy on the outside, chewy on the inside,” said George.

For the record, her commercial kitchen is in New Jersey.

For the perfect bagel, George said, it’s all about the ingredients: “It’s the water, obviously. But it doesn’t have to be New York water. It just has to be good water. So, you can make a bagel outside of New York, a very good one.”

She enlisted correspondent Martha Teichner to demonstrate that making a bagel is not a piece of cake.

Bagels have to be boiled or steamed before they’re baked, and don’t forget the schmear (Yiddish for what you spread on your bagel), and the lox (smoked salmon).

Goldilox Bagels, outside of Boston, is one of 40 or so businesses Beth George has helped launch. Lindsey Gaudet was a business analyst for a high tech company; her husband, Ed Thill, is a chef.

“Right away Beth put us to work,” said Thill. “She’s like, ‘You, go weigh out this tub of water and this much flour, and you, you do this…’ Yeah, it was boot camp.”

The scene at Goldilox Bagels.

Elizabeth Rubin called George her “bagel whisperer”: “And I call her my bagel mama. There’s an umbilical cord that goes across the sea from her to me.”

All the way to Gothenburg, Sweden, where, in 2018, the transplanted New Yorker opened Jimmy & Joan’s New York, named for her father and his twin sister.

“In Sweden, they had what looked like a bagel, but it was just bread with a hole. It was like an imposter!” Rubin laughed.

Now, they’ve got the real thing!

Customers dig in to some authentic New York-style bagels, at Jimmy & Joan’s New York in Sweden.

The basics of baking bagels »