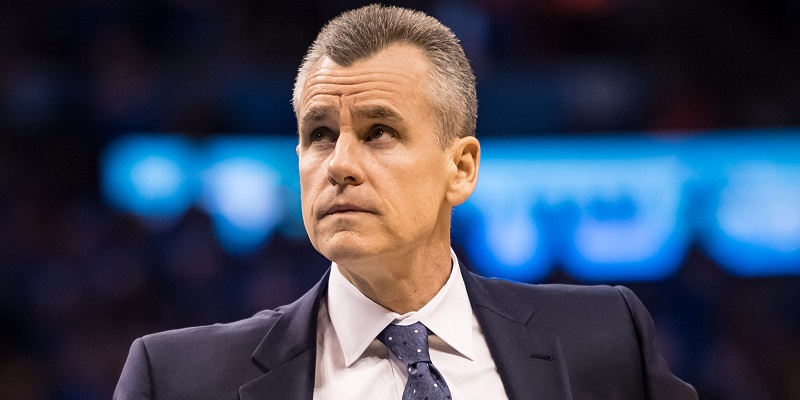 Billy Donovan, who came in third in NBA Coach of the Year honors this season, mutually agreed to leave the Oklahoma City Thunder on Tuesday.

The move announced by the club comes less a week after the Thunder lost Game 7 of the their first-round Western Conference playoff series to the Houston Rockets 104-102.

Donovan, 55, completed the five-year deal with the Thunder that he signed in April 2015.

Thunder general manager Sam Presti said in a statement, in part, “We had planned to sit down at the end of the season and discuss the best way to move forward for both of us. After those discussions, it became apparent that we couldn’t provide him the information on the future direction of the team over the next several seasons to give him the level of clarity that he understandably desires at this stage of his career. Therefore, we close this chapter and reflect fondly on all that he has given to the team, organization and community. Billy will always have a place in the Thunder family.” 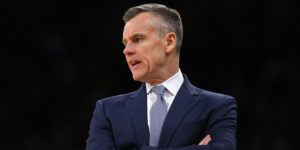 Donovan said in a statement, in part, “Coaching the Oklahoma City Thunder the past five seasons has been a great honor, and I thank (team owner Clayton) Bennett, Sam and the entire organization for the opportunity. I have a great respect and admiration for the players I coached in Oklahoma, and I also want to thank the coaches I worked with, who gave unbelievable time and expertise to our common goal.”

The Thunder weren’t viewed as a playoff contender entering the season, as their two top scorers from 2018-19, Paul George and Russell Westbrook, had exited. However, they tied the Rockets for the fourth-best regular-season record in the Western Conference at 44-28, then pushed Houston to the limit in the playoffs.

George was traded to the Los Angeles Clippers in a deal that brought in Shai Gilgeous-Alexander, who became the Thunder’s top scorer in the 2019-20 regular season. Westbrook was dealt to the Rockets in a swap that netted veteran Chris Paul.

Third in Coach of the Year voting

The two coaches who finished ahead of Donovan in Coach of the Year voting, announced Aug. 22, were Nick Nurse of the defending champion Toronto Raptors, who lost Kawhi Leonard to the Clippers, and two-time Coach of the Year Mike Budenholzer of the Milwaukee Bucks.

Donovan amassed a 243-157 record in his five years at Oklahoma City, guiding the team to the playoffs each year. His playoff record was 18-23, with the best season being his debut year of 2015-16, when the Thunder lost in Game 7 of the Western Conference finals to the eventual champion Golden State Warriors. Oklahoma City led that series 3-1 behind Kevin Durant and Westbrook but couldn’t close it out. Donovan coached the University of Florida to consecutive national championships in 2006 and 2007 as part his run on the bench in Gainesville from 1996-2015. He guided the Gators to four Final Fours, six Southeastern Conference regular-season titles and four SEC tournament championships.

As a guard in his playing days, Donovan led a Rick Pitino-coached Providence team to the 1987 Final Four, and he went on to a brief stint in the NBA with the New York Knicks. He started his coaching career as an assistant under Pitino at Kentucky from 1989-94, and he was the head coach at Marshall in 1994-95 and 1995-96, compiling a 35-20 record.

« Iran pressured to spare life of wrestler who faces execution

What Is There Is No Light? Kickstarter Goes Live For The Brutal And Beautiful Indie Action-Adventure RPG »