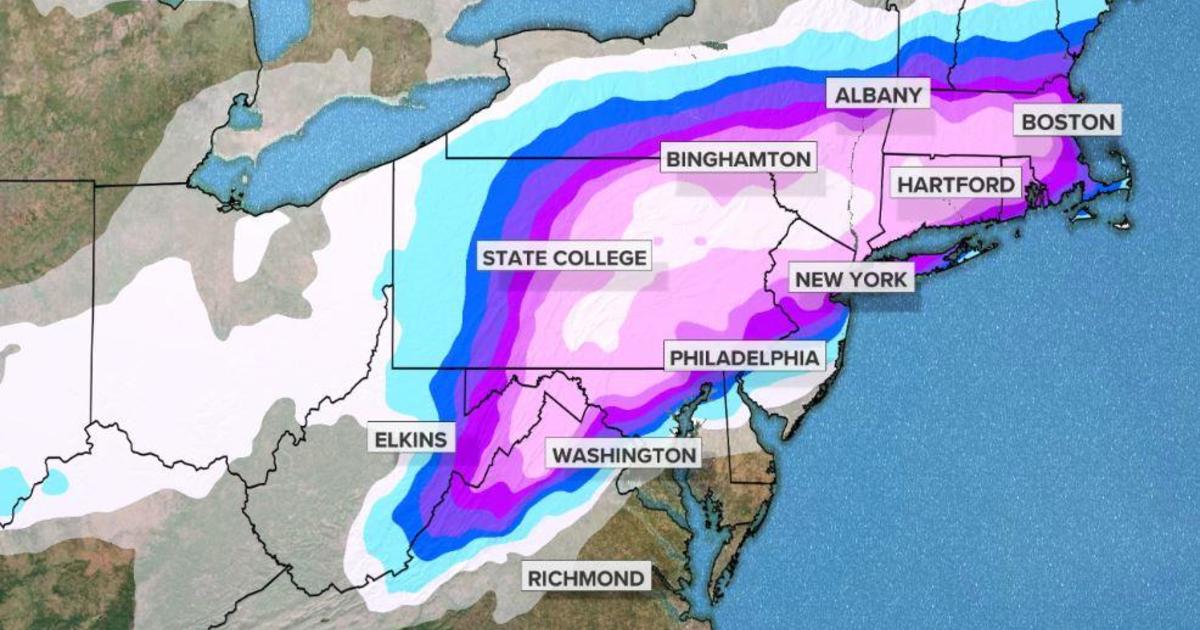 And it won’t be just New York. Much of the densely populated parts of the Northeast stand to see a walloping of heavy snow as a major nor’easter takes aim. Some cities may pick up more than a half a season’s worth of snow in 24 hours.

For cities like Washington, D.C., Philadelphia and New York, a major nor’easter seems long overdue. That’s because many of these cities saw historically low amounts of snow last winter. The Big Apple only measured 4.8 inches last season — its 4th least snowiest season on record. The least amount of snow ever recorded in New York City came in the 1972-73 season, when the city saw only 2.8 inches.

For perspective, in a normal year, Central Park tallies around 25 inches of snow, and the snowiest season of 1995-96 delivered a whopping 75.6 inches.

On Sunday morning, the parent storm, which will eventually become a nor’easter, was still 3,000 of miles away from the Northeast, about to slam into the Pacific Northwest with heavy mountain snow in Washington state and Oregon.

Lots to see on the latest water vapor imagery:

1. The center of the storm system due west of British Columbia
2. The moisture plume stretching from the Gulf Of Alaska all the way down to the Central Coast.
3. A promising setup for another round of late night rain showers 😀#cawx pic.twitter.com/weOeiCnOvc

Before it reaches the East Coast, it will traverse the entire U.S., diving southeastward through the Rockies, dumping heavy snow in the mountains. On Tuesday, having been robbed of moisture by the Rockies, the storm will bring only a light coating of snow to the Southern Plains around Oklahoma. But by Wednesday, the storm will start to crank again, thanks to a shot in the arm of moisture from the Gulf of Mexico.

Depiction Wednesday morning as snow develops over Kentucky and the Appalachians. The storm will start as ice in parts of North Carolina and Virginia before changing to rain later Wednesday.

As the Gulf moisture meets cold air sitting and waiting in Kentucky, snow will start to fly and increase in intensity and coverage early Wednesday morning as it moves over the Appalachians. Once the storm jumps the mountains, Atlantic Ocean moisture will get infused into the system and heavy snow will break out in northern Virginia, Maryland and Pennsylvania on Wednesday afternoon and reach Washington, D.C., Philadelphia and New York City by early to mid afternoon.

Depiction Wednesday night as heavy snow falls from the major I-95 cities west and north. Some of the snow will be mixed with rain and sleet along the coast.

The heaviest snow will fall along and just to the northwest of the I-95 corridor. In the nation’s capital, it appears the precipitation will fall as a mixed bag of snow, sleet and rain. In Philadelphia, it should be mainly snow and sleet. From New York City to Boston and points northwest, this should be mainly a snow storm. The heaviest snowfall rates will start late Wednesday into Thursday morning, with 2 inches per hour piling up in spots.

While it’s still too early to pinpoint details, and things are bound to change between now and midweek, there is large confidence that a swath of very heavy snowfall will pile up. The below image is a general idea of where the heaviest snow may fall, but it will likely shift a little before the event. Hartford, Providence and Boston are likely to be in the bullseye.

Depicted is a very early snowfall total forecast for Wednesday and Thursday. The zone of heaviest snowfall will likely shift some as the event nears.

What makes this system different from so many others over the past few years is the availability of cold air. As the storm moves in, temperatures over the Ohio Valley, Mid-Atlantic and New England will be in the 20s. Typically, a storm’s southerly winds would be enough to shove that cold airmass out, but it’s not likely to happen this time. That’s because a strong, cold high-pressure system over southern Canada shows no signs of budging, stuck there as a result of an atmospheric block, like a traffic jam, upstream near Greenland. This should keep the cold air locked in place.

Something we've had very little of last year, blocking. Greenland block and slower moving low near 50 degrees/ 50 degrees lat/long. These provide an upstream traffic jam. Should be enough to keep the storm heading more east and from overwhelming the cold pool over the Northeast. pic.twitter.com/zL1hpbcAzn

The support for this system by all trustworthy computer models sets this system apart from most others. Usually there would not be this much confidence in a snowstorm four to five days ahead of time. But with all models, more or less, showing the same evolution and similar placement of the heavy snow, it is a rare occasion to provide this reliable an early warning.

With that said, the particulars are bound to change as the storm gets closer. By Monday night or Tuesday morning, the picture and details will become a lot more clear.