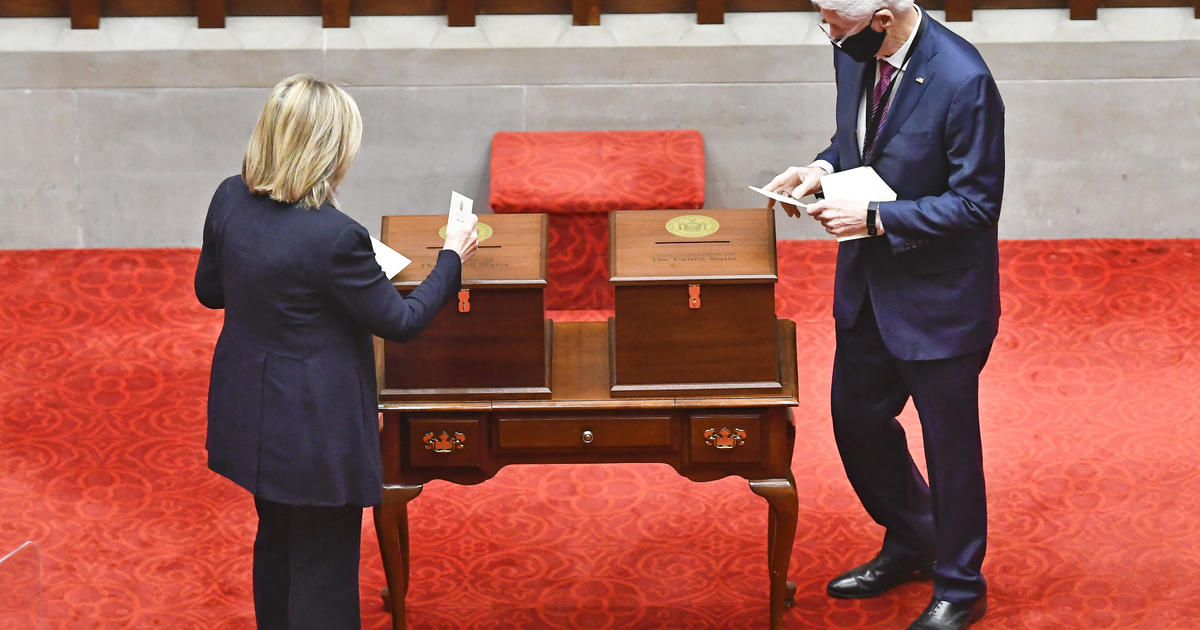 Electors are casting their ballots Monday in the Electoral College and will declare the winner of the 2020 presidential election. Their votes will then be sent to Washington to be counted by Congress on January 6.

At 5:30 p.m. ET, California cast their 55 Electoral College votes for President-elect Joe Biden, putting him over the 270 needed to win.

President Trump has refused to concede the election and his last-ditch legal attempts to overturn the results have been quashed in the courts. On Friday, the Supreme Court rejected a lawsuit filed by Texas Attorney General Ken Paxton that sought to stop electors in four key battleground states from voting Monday.

Mr. Biden is scheduled to give a speech Monday night after all the electors have voted.

What exactly is happening on Monday?

Federal law dictates the electors meet on the Monday in December that follows the second Wednesday, which in 2020 falls on December 14.

There are 538 electors. The number from each state is based on population and is equal to the number of members of Congress the state has, in the House and Senate, meaning the minimum any state can have is three. The state with the most electors is California, which has 55. Washington D.C. has three electors even though it is not a state.

The votes will take place at different times, starting at 10 a.m. ET and concluding with Hawaii at 7 p.m. ET. In Michigan, state House and Senate offices are closed because of “credible threats of violence” — not because of “anticipated protests” — and as a result, electors will have police escorts from their cars to the capitol building, according to a spokesperson for state Senate Majority Leader Mike Shirkey. Michigan’s Electoral College members are scheduled to vote at 2 p.m. ET.

The electors are not necessarily bound by law to vote according to the state’s results, and there were 10 “faithless electors” in 2016. But most states have laws that nullify the votes of “faithless electors,” and the Supreme Court ruled in July that states can punish them. FairVote found that since the founding of the Electoral College, there have been 167 faithless electors.

Who are the electors?

Sometime between May and August, states’ political parties and independent candidates nominate electors for each ticket. The Constitution doesn’t state how states must pick electors, so most candidates are nominated by state party committees or at a state party convention.

Electors may not be U.S. senators, members of Congress or anyone holding an “Office of Trust or Profit under the United States.”

Most of the electors are not famous, but there are a few big names this year. Former President Bill Clinton, 2016 Democratic nominee Hillary Clinton and New York Governor Andrew Cuomo are all Democratic electors for New York, and South Dakota Governor Kristi Noem is a Republican elector for her state.

Stacey Abrams, the 2018 Georgia Democratic gubernatorial candidate, was a Georgia elector. She was elected over her fellow electors to preside over the meeting that backed Mr. Biden and Vice President-elect Kamala Harris.

Michigan House Speaker Lee Chatfield issued a statement Monday saying that the state House will not be choosing a new slate of electors. A GOP lawmaker had indicated he was part of a group that supported choosing new electors, according to the Detroit Free Press. Michigan Representative Gary Eisen also would not rule out the possibility of violence.

Chatfield said he “fought hard” for Mr. Trump, but he “can’t fathom risking our norms, traditions to pass a resolution retroactively changing the electors for Trump simply because some think there may have been widespread fraud to give him a win.”

December 23: All copies of the electors’ votes must be delivered to the recipients.January 6: Congress will count the votes of the electors. Procedure calls for Pence to open each state’s “certificate of ascertainment” — documents prepared by the state after it has completed its vote count and ascertained the official results. He will then present the certificate to four “tellers” who announce result tallies. Once a candidate reaches 270 electoral college votes, Pence will declare the winner.January 20: Mr. Biden will be inaugurated.

« Lost your job? Watch out for these scams

Dawn French, 63, confesses she's only been drunk six times in her whole life »