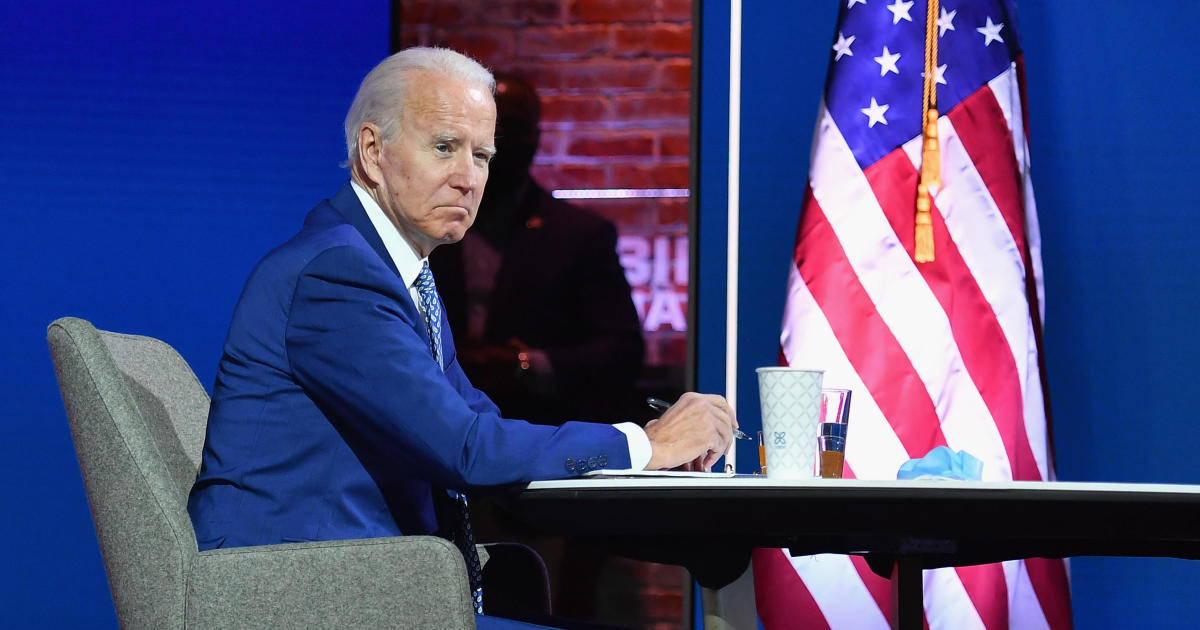 While the COVID-19 public health crisis and its impact on the U.S. economy will preoccupy President-elect Joe Biden during his first weeks in office, the incoming Democratic administration is also expected to quickly start dismantling President Trump’s immigration agenda.

After Mr. Biden is sworn-in in January, his administration will move to fully restore an Obama-era program that shields 640,000 undocumented immigrants who were brought to the U.S. as children from deportation, halting Mr. Trump’s unsuccessful efforts to end it, people familiar with the plans told CBS News. The incoming administration also intends to rescind Mr. Trump’s travel and immigration restrictions on 13 mostly African or predominantly Muslim countries.

Mr. Biden will look to implement a 100-day freeze on deportations while his administration issues guidance narrowing who can be arrested by immigration agents. Obama-era memos that prioritized the deportation of immigrants with criminal convictions, recent border-crossers and those who entered the country illegally more than once were scrapped in 2017 by Mr. Trump so that no unauthorized immigrant would be exempted from being arrested and removed from the country.

A source familiar with Mr. Biden’s plans said new guidance would be designed to curb so-called “collateral arrests,” which are apprehensions of immigrants who are not the target of U.S. Immigration and Customs Enforcement (ICE) operations but are nevertheless taken into custody because they are in the country without legal status.

Mr. Trump made immigration a major theme of his insurgent and successful 2016 campaign. Despite frequent court challenges, his administration achieved rare success on this front in four years, reshaping the U.S. immigration system through more than 400 high-profile and little-noticed policy changes.

However, all of Mr. Trump’s immigration measures — from the so-called “travel ban” and the efforts to end the Deferred Action for Childhood Arrivals (DACA) program, to new requirements for green cards and the asylum restrictions for migrants at the U.S. southern border — were enacted without Congress through proclamations, policy memos, regulations or other executive actions.

With his defeat, Mr. Trump’s immigration policy changes are now vulnerable — and Mr. Biden’s team is eager to begin the process of undoing most of them.

“All that stuff was done administratively through the [president’s] executive authority, and so a new executive can basically reject those and start from scratch,” a source familiar with the Biden team’s plans told CBS News.

Then-Democratic presidential hopeful Joe Biden talks with a protester objecting to his stance on deportations in Greenwood, South Carolina, on Thursday, November 21, 2019.

At the southern border, Mr. Biden has pledged to discontinue the Trump administration’s policy of requiring non-Mexican migrants to wait in Mexico for the duration of their U.S asylum cases. It is unclear, however, how the cases of thousands of asylum-seekers currently waiting in northern Mexico will be adjudicated and whether any of them will be paroled and allowed to continue their proceedings in the U.S.

A source familiar with the Biden team’s planning said the incoming administration will withdraw from the three bilateral agreements Mr. Trump brokered with Guatemala, El Salvador and Honduras that allow the U.S. to send rejected asylum-seekers to those countries and have them seek refuge there.

The potential revival of the program, coupled with increased foreign aid to Central America, would be part of a broader Biden administration approach to address unauthorized migration from the region — a diplomatic task Mr. Biden was charged with overseeing during President Obama’s tenure.

Mr. Biden’s team is also planning to begin the process of terminating the “public charge” rules the Trump administration implemented to deny green cards and immigrant visas to applicants who U.S. officials determine rely — or could rely in the future — on government benefits like Medicaid, food stamps and Section 8 housing vouchers. Because the 2019 rules were instituted through the regulatory process, experts expect their rescission to take longer than that of presidential directives.

Citing the coronavirus-induced economic downturn, Mr. Trump invoked his executive authority this spring to limit legal immigration and the issuance of temporary work visas — and those restrictions have yet to be lifted.

The Trump administration has also expelled tens of thousands of unauthorized border-crossers, including unaccompanied children, without court hearings or asylum screenings through an order issued by the Centers for Disease Control and Prevention (CDC). While the Trump administration has defended the policy as one based on public health, former officials have said they were pressured into authorizing it.

Mr. Biden has yet to say whether his administration will continue, alter or completely scrap Mr. Trump’s pandemic-era limits on immigrant and work visas. Mr. Biden’s campaign promised that the former vice president will direct the CDC to review the expulsions policy “to ensure that people have the ability to submit their asylum claims while ensuring that we are taking the appropriate COVID-19 safety precautions.”

The president-elect has promised to dramatically increase refugees admissions, moving away from the record-low 15,000 spots set by Mr. Trump and raising the cap to 125,000. Mr. Biden has also pledged to grant Temporary Protected Status (TPS) to certain Venezuelan exiles in the U.S. to shield them from deportation.

León Rodríguez, who led U.S. Citizenship and Immigration Services (USCIS) during the Obama presidency, said a Biden administration should prioritize reviewing Mr. Trump’s efforts to end TPS protections for approximately 300,000 immigrants from El Salvador, Haiti, Nicaragua, Sudan, Nepal and Honduras. In September, a federal appellate court allowed the Trump administration to terminate the programs, but TPS beneficiaries are not set to lose their protections until March 2021.

Jennifer Molina, a spokeswoman for the Biden campaign, said the incoming administration will also create a task force to help locate hundreds of migrant parents who were separated from their children at the U.S.-Mexico border in 2017 and 2018 and remain unreachable. “President-elect Joe Biden will restore order, dignity and fairness to our immigration system. At its core, his immigration policy will be driven by the need to keep families together,” Molina said in a statement.

A Cuban migrant under the “Remain in Mexico” program reacts after media announced that Joe Biden has won the presidential election in Ciudad Juárez, Mexico November 7, 2020.

While Mr. Biden’s team will have the legal authority to overturn Mr. Trump’s policies, Doris Meissner, a former commissioner of the now-defunct Immigration Naturalization Service (INS), said it will not be an easy endeavor, given bureaucratic requirements, the ongoing COVID-19 emergency and the volume of changes implemented over the past four years.

“The Trump administration had an extraordinary preoccupation with immigration issues and they invested an enormous amount of attention and single-minded focus on immigration,” Meissner, who is also a senior fellow at the non-partisan Migration Policy Institute, told CBS News. “An administration that wants to undo those changes would have to devote a similar amount of time and effort — and arguably more, because you don’t want to just be undoing things. You want to be moving a proactive agenda as well.”

Lynden Melmed, who served as the top lawyer at USCIS during President George W. Bush’s second term, said the Biden administration will need to be careful not to rush its policy reversals, as they could face the same court challenges that hampered Mr. Trump’s immigration agenda.

“They are going to be attacked the whole way as they try to roll these things back,” Melmed told CBS News. “They are going to need to really be thoughtful about how they retreat out of some of these policies, otherwise opponents and supporters of the Trump administration’s policies will be able to hang them up in court.”

Mr. Biden has vowed to introduce legislation that would allow the nation’s estimated 11 million undocumented immigrants to legalize their status, but such an effort — which has proved elusive for two decades — would need to be approved by a divided Congress. Several House Democrats lost their seats last week and while control of the Senate will hinge on the outcome of two Georgia races in January, any potential Democratic majority would be razor thin.

Asked about the possibility of extending temporary protections from deportation to certain undocumented immigrants in the absence of congressional action, a source familiar with Mr. Biden’s planning said the president-elect would consider all “legally available” options.

Marielena Hincapié, a member of a task force of Biden and Bernie Sanders supporters who created a unified immigration platform, said the incoming administration should use “all the levers of government” to protect certain undocumented immigrants, including COVID-19 essential workers, from deportation.

“We can’t at the same keep applauding all these essential workers who we are relying on and not recognize them legally,” Hincapié told CBS News. “And so, providing them with some kind of protection and work authorization so that they can do the work without the fear of detention or deportation, and to actually be able to work within the law, is also really critical.”

While Mr. Trump has yet to acknowledge his defeat or allow his administration to release congressionally authorized funding and government resources to the Biden transition team, Mr. Biden’s staffers continue preparing for a transfer of power.

“We don’t see anything slowing us down,” Mr. Biden said Tuesday.

« Election recount in Georgia will be done by hand, official says