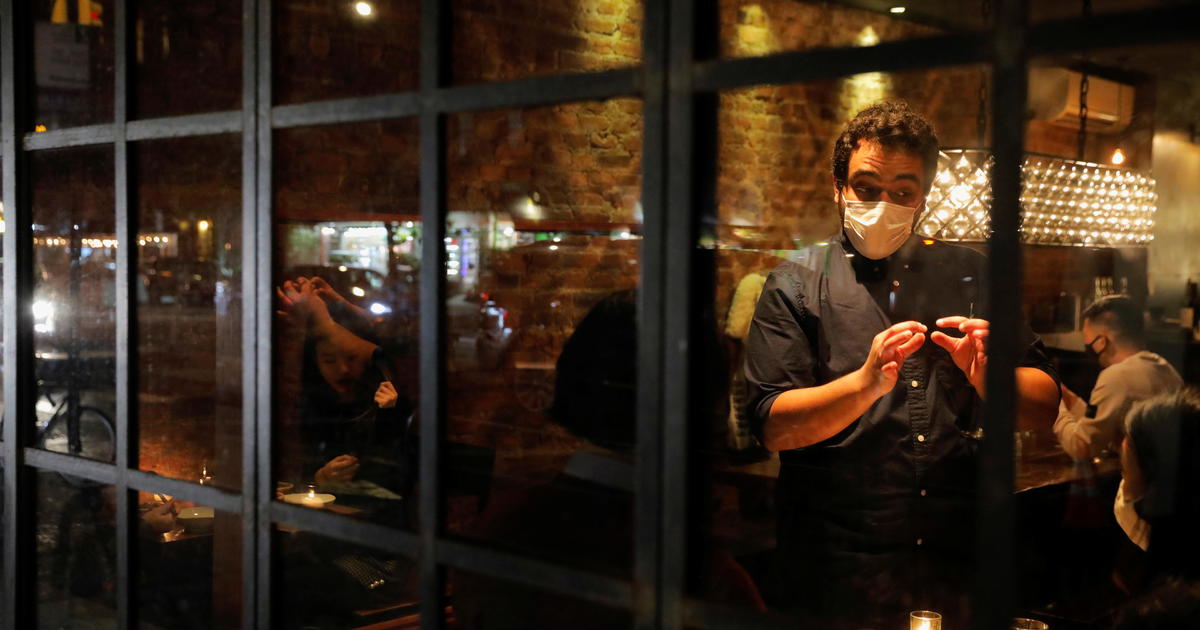 Dr. Celine Gounder, a member of President-elect Joe Biden’s COVID-19 advisory board, told CBSN on Saturday that indoor dinning poses a greater risk of virus spread than schools do. Earlier this week, she called indoor dining “a major spreader of the infection.”

Gounder told CBSN’s Lana Zak on Saturday that municipalities making reopening decisions should weigh risk of transmission with how essential a service is. “From that perspective, restaurants indoor dining is far riskier, far more likely to lead to transmission than are schools,” she said. “They should be closed first and schools not until later.” Gounder added, however, that it’s unsafe to keep schools open in places with widespread transmission — the status of many communities across the country.

The United States set COVID-19 records for a fourth consecutive day this week. More than 184,000 cases were reported nationwide and over 68,000 people hospitalized with the virus on Friday alone. An average of over 1,100 Americans have died per day of the virus over the last week.

Rising case numbers in New York City prompted Mayor Bill de Blasio on Friday to warn parents with children in the nation’s largest school system that they should be prepared for a return to fully remote learning as early as Monday, CBS New York reported. The announcement comes as the city rapidly approaches the 3% COVID-19 positivity rate threshold that will trigger school closings.

The mayor noted that “very few people” have tested positive in schools — according to CBS New York, the positivity rate in schools is less than 1%. But de Blasio said that the city’s higher rate means “we’ve got to act out of an abundance of caution.”

“Have a plan, an alternative plan, for as early as Monday,” the mayor said, adding that if schools were forced to close, “the goal is bringing it back as soon as possible.”

Gounder said on CBSN that the explosion in case numbers across the country is likely being driven by colder weather causing more people to gather indoors. She stressed that everyone, no matter where they live, should remain vigilant during the approaching holiday season.

“I understand that (people) will want to celebrate with their family and friends, the problem is we have a fire raging across the country right now,” she said, adding that gathering socially, as you would any other year, would be “like pouring gasoline on that fire.”

President-elect Joe Biden announced Monday the team of public health experts and scientists who will guide him and Vice President-elect Kamala Harris in responding to the pandemic. The COVID-19 Advisory Board comprises 13 doctors and scientists, including Gounder, who is an infectious disease specialist and epidemiologist at the NYU Grossman School of Medicine and Bellevue Hospital and has treated COVID-19 patients since the pandemic began.

The Biden-Harris board has been hindered by the General Services Administration’s refusal to formally acknowledge Mr. Biden as the likely winner of the presidential election. Gounder said she has not been in touch with anyone on the current White House coronavirus task force since being appointed to the advisory board.

“This is really problematic that we are not having a smooth handover of information and power during this transition period,” she said. “We are at war with the virus… In the absence of this critical information our national security is quite frankly at risk. This is a risk to the health of the people in the United States, it’s also a risk to our economy.”

Despite roadblocks, Gounder said the board is forging ahead with plans to address the pandemic once Mr. Biden is sworn into office. The President-elect intends to increase supplies of personal protective equipment, PPE, through use of the Defense Production Act, and coordinate with state and local health departments, as well as the private sector, to distribute a vaccine, particularly to rural communities that are less accessible.

“Smaller rural communities are going to be far more challenging. They’re going to be farther in distance from the centralized locations where we will have the deep freeze capacity that a vaccine, such as the one that Pfizer’s producing, will require,” Gounder explained. “They also don’t have as many of the CVS and Walgreens pharmacies that will be helping to distribute the vaccine. So rural areas are certainly going to be more challenging.”

“We’re being very proactive about interfacing with the big parties — players in this distribution effort, including the folks at CVS and Walgreens and local and state health departments, big hospital systems,” she said. “They’re going to be the ones on the frontlines, and we are very much working hand in glove with them.”

Asked if the lack of communication between the Trump administration and Mr. Biden’s team will cause overlapping or differing plans, Gounder said that is not a concern. “That would imply that you actually have robust planning being conducted by the current administration,” she said.