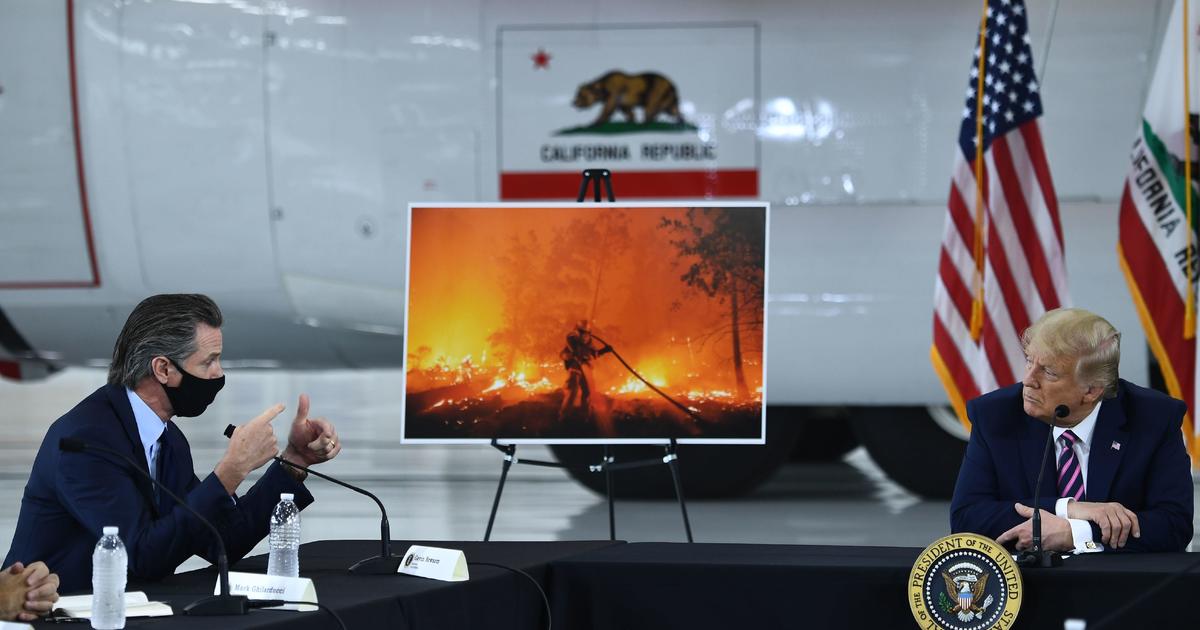 President Trump’s repeated refusal to accept climate science could not be farther from the view held by opponent Joe Biden, who believes climate change “poses an existential threat.” The difference in opinion became clear again on Monday when Mr. Trump dismissed the scientific consensus on climate change at a briefing on California’s record-breaking wildfires Monday.

In a striking exchange between the president and the head of California’s Natural Resources Agency, Wade Crowfoot, Mr. Trump dismissed Crowfoot’s plea for cooperation in addressing climate change.

“We want to work with you to really recognize the changing climate and what it means to our forest, and actually work together with that science — that science is going to be key,” Crowfoot told the president at McClellan Airport in Sacramento.

Mr. Trump responded by suggesting that global warming will somehow reverse itself. “It will start getting cooler. You just watch,” he said. Crowfoot, an expert in climate and sustainability issues, replied, “I wish science agreed with you.” To which the president said, “I don’t think science knows actually.”

President Trump speaks to California Governor Gavin Newsom at Sacramento McClellan Airport on September 14, 2020, during a briefing on wildfires.

The Trump administration’s own National Climate Assessment — a peer-reviewed assessment mandated by Congress — warned in 2018 that “more frequent and intense extreme weather and climate-related events, as well as changes in average climate conditions, are expected to continue to damage infrastructure, ecosystems, and social systems that provide essential benefits to communities.”

In response to the report, the president told the Washington Post last year that he does not “believe” in climate science. “One of the problems that a lot of people like myself, we have very high levels of intelligence but we’re not necessarily such believers,” he said when asked why he was skeptical of the assessment. “As to whether or not it’s man-made and whether or not the effects that you’re talking about are there, I don’t see it,” he added.

Some of the dire consequences of climate change, outlined in the Trump administration’s assessment, now seem to be materializing. The West Coast had its most intense heat wave in modern history this year, followed by its most ferocious flare-up of catastrophic wildfires, which have now burned over 3 million acres. Meanwhile, just a few hundred miles east, a 60-degree temperature drop over just 18 hours in Wyoming and Colorado was accompanied by an extremely rare late-summer dumping of up to 2 feet of snow.

When he was in California on Monday, Mr. Trump suggested that forest management is key to containing and controlling the state’s wildfires. Crowfoot told him that is not the whole picture. “If we ignore that science and sort of put our head in the sand, and think it’s all about vegetation management, we’re not going to succeed together protecting Californians,” he said.

Mr. Trump has called climate change a “hoax,” and rolled back numerous policies put in place to protect the natural environment. Despite his record, the president recently declared himself the greatest environmentalist since President Theodore Roosevelt, who helped protect 230 million acres of public land.

In contrast, Biden’s campaign website features the candidate’s climate change plan, which stresses that it threatens not just the environment, but also “our health, our communities, our national security, and our economic well-being.”

Biden has endorsed the Green New Deal, noting that it “captures two basic truths” at the core of his climate change plan: “(1) the United States urgently needs to embrace greater ambition on an epic scale to meet the scope of this challenge, and (2) our environment and our economy are completely and totally connected.” His plan sets a goal for a 100% clean energy economy and net-zero emissions by 2050.

We need a president who takes climate change seriously.

Scientific American announced Tuesday that it is backing Biden for president, marking the first endorsement in the magazine’s 175-year history. In endorsing Biden, the magazine’s editors also wrote that “Donald Trump has badly damaged the U.S. and its people— because he rejects evidence and science.”

“That is why we urge you to vote for Joe Biden, who is offering fact-based plans to protect our health, our economy and the environment,” the editors wrote. “These and other proposals he has put forth can set the country back on course for a safer, more prosperous and more equitable future.”

As the president traveled to California to be briefed about the fires, Biden told supporters in Delaware that a cornerstone of the American Dream, home ownership, is at stake if we do not confront climate change.

“We need a president who respects science,” he said. “Who understands that the damage from climate change is already here. Unless we take urgent action, it’ll soon be more catastrophic.”