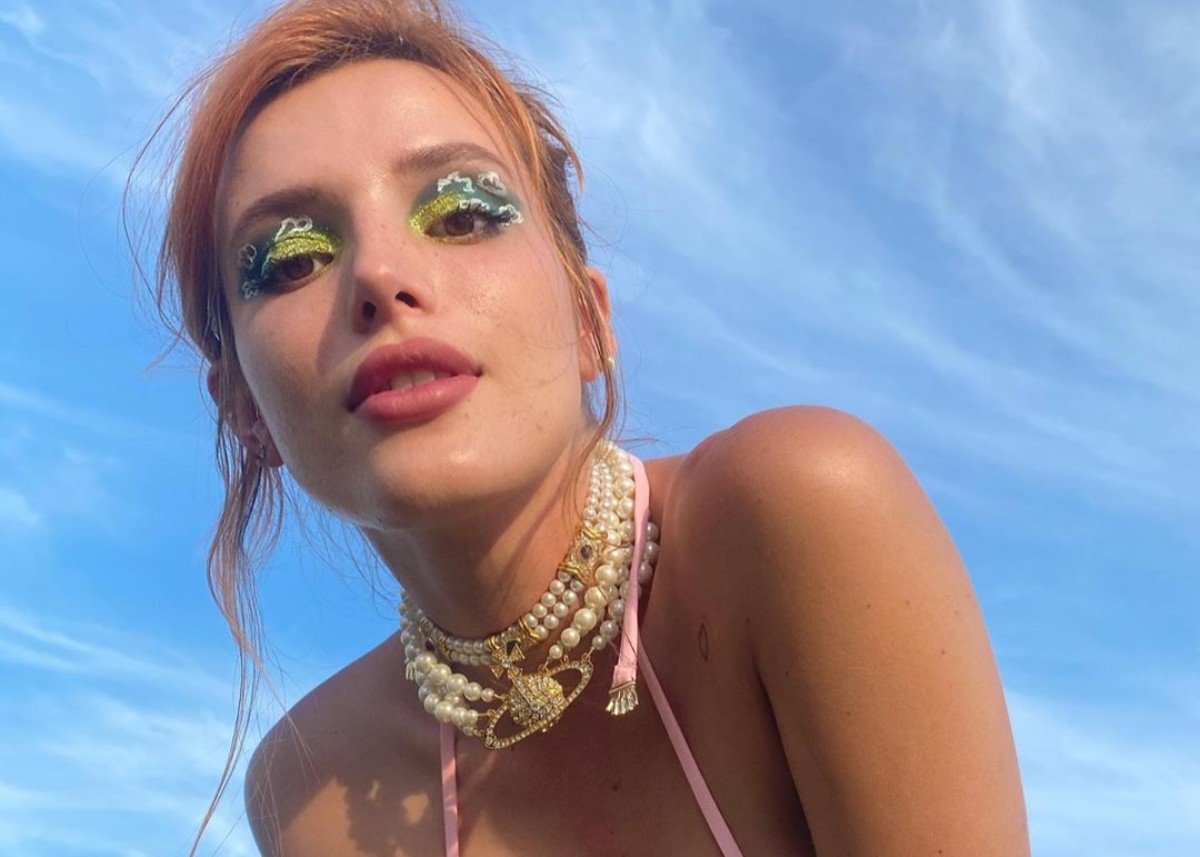 Bella Thorne is sizzling this summer as she vacations with her boyfriend Benjamin Mascolo. Known for her beauty as well as acting, Bella has worn a variety of fashionable bikinis as she enjoys the fun in the sun. To Bella and Benjamin, it’s as if the Coronavirus pandemic hasn’t put a damper on their fun as they were recently spotted yachting, jet skiing, and frolicking in the ocean. Earlier in July, Bella shared several photos of herself summer-ready and carefree to her official Instagram account, where she has 23.3 million followers, but it’s also the photos that paparazzi have captured of the Infamous actress that are going viral.

In the first set of swimsuit photos below, Bella Thorne wore a Lazy Oaf, Cloud bikini top with a pair of white shorts or pants. It was the Fourth of July and Bella accessorized the pastel blue with white clouds, triangle-cupped bikini with layers of pearl necklaces, and hair jewelry. She wore an oversized watch with a gold and diamond, chainlink bracelet on her wrist.

The Lazy Oaf Cloud bikini normally retails for approximately $55 but many retailers have put it on sale since Bella wore it and demand skyrocketed.

You may see several photos of Bella wearing the bikini top below.

Bella also shared several photos of herself wearing a red, bandeau style bikini while vacationing in Nobu, Los Cabos, Mexico. She wore her red hair pulled back and away from her face and shielded her eyes with a pair of Chanel metal and imitation pearl sunglasses. Pearls have been a popular accessory in Bella’s latest outfits and she wore a string of pearls around her neck.

Tropical girl 🥰 where to next?

Bella then shared a photo of herself wearing a Dior, monogrammed bikini in blue. She paired the bikini with a pair of Ksubi, Rollin Out shorts. Again, she wore a pair of Chanel sunglasses.

Being Latina I love learning about all the different Latin cultures, can’t wait to go to Cuba 😍 MY PEOPLE!!

Bella Thorne and Benjamin Mascolo have been having a great time on their vacation. Check out the couple jetskiing in the video player below.

Bella shared several photos of herself posing with Benjamin on her Instagram account and in her stories where she wore the Disquared2 Logo-Print bikini top and bottom.

Here is another shot of Bella and Benjamin as she wore the Disquared2 bikini.

You may see a video clip of Bella and Benjamin kissing while on the yacht in the player below.

What do you think about Bella Thorne’s sizzling summer looks?

Read More: Bella Thorne Sizzles This Summer In A Variety Of Two-Piece Bathing Suits As She Vacations With Benjamin Mascolo